We have come to the first of four milestones in the long fantasy baseball season. Most leagues have around 22 weeks of competing in the regular season and at least 3 weeks of playoffs, making the season about 25% over at this point. Some managers have been a bit frustrated by the under-achieving Red Sox and Yankees while others are reaping the rewards of some over-achieving teams like Cleveland and Baltimore. Meantime for those interested in who’s hot enough to make our Waiver Wire Pickup list this week, here are another five to consider..

Jonathan Lucroy-C-Brewers-When we started putting this list together on Sunday night, Lucroy was owned in 39% of leagues. What a difference a day and seven RBI’s in Sunday’s game makes. He is now owned in 46% of leagues and since he’s not playing on Monday,(manager Ron Roenicke will stick to his plan of using George Kottaras as the catcher when Randy Wolf is on the mound), the adds will slow until Tuesday when he is scheduled to be behind the plate again. How any catcher batting .342 on the season and on pace to knock in 108 runs is still so widely available is astonishing. In addition to his 4 HR’s he has 3 triples and 7 doubles, proving how well he’s been mashing the ball. There isn’t a more productive catcher widely available on waivers so we place Lucroy in our ‘Must Adds’ for the week! 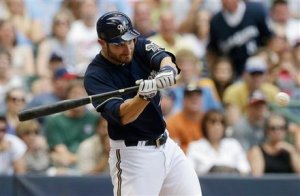 Jonathan Lucroy, after knocking in seven runs on Sunday, has become one of the most added players in leagues. Photo: the associated press

Dayan Viciedo-OF-White Sox- Viciedo, who just turned 23 this past March, has been playing out of his mind in his last seven games. Batting a torrid .444 (12 for 27), he also has belted 4 home runs and has 10 RBI’s and 5 runs scored. Since May 13th he had added almost 50 points to his batting average which admittedly is still low at .245, but if you can afford to grab him, we recommend riding the LF/RF until he shows signs of slowing down. There isn’t enough on his major league resume to go on as he has only had about 200 career AB’s before this season when he’s finally be given the start in LF. He is currently only owned in around 20% of leagues and worth a flier in deeper leagues.

Alfonso Soriano-OF-Cubs- Remember him? Soriano is now entering his 14th year in the bigs and still possesses some punch in his bat. In the last four seasons, Sori has averaged 25 homers. His biggest enemy is the injury bug and that’s why we say that there is some risk involved with Sori on your team. He’s been hot of late hitting safely in seven of his last eight games with three HR’s, 7 RBI’s and 10 runs scored. He has a .360 batting average over the last six games and has raised his average 20 points to .270, very close to his career .274 BA. He has had some knee soreness and said he will play through it while making adjustments. Soriano is available in about 2/3 of leagues.

Wade Miley-SP/RP-Diamondbacks- This 25 year old southpaw just picked up his fifth win on Sunday on a six hit shutout vs the Kansas City Royals. Miley has taken full advantage of the opportunity to join the starting rotation ever since Josh Collmenter was sent to the bullpen. He’s sporting a 2.41 ERA and a 1.19 WHIP. His control has been impeccable as indicated by his 30K’s against 14 BB’s. The reliever turned starter this year will face the Brewers on Friday followed by the Giants in S.F., the team that he earned his first victory from back on April 8th. We like Miley and think he qualifies as one of our sleeper candidates. Among all pitchers in Yahoo! leagues, Miley is ranked 82nd. He’s owned in just 25% of leagues and makes for a nice pickup in 12+ leagues.

#67 Diamondback’s Wade Miley takes his 5-1 record and faces Milwaukee on Friday. He has become one of our sleeper candidates. Photo: Christian Petersen/Getty Images)

Matt Adams-1B-Cardinals- This highly touted prospect made his season debut against the Dodgers on Sunday and went 2-4.  This is not why we think he’s worth a speculative add of course. What we do find intriguing is that in his last 152 games in Double-A and Triple-A in the Cardinals organization, he has 41 homers and a .300+ batting average. With 1B Lance Berkman (torn meniscus) out for up to eight weeks, De Aza has an opportunity to show his talents and make a case for staying in the lineup should Berkman return. (There has been chatter about Berkman not returning this season). He’s barely owned (just 15%) so if you have the room or want a sub for Berkman, or you are in deeper leagues, give Adams a shot.

Five Pitchers To Help You Win Your League:

R.A. DICKEY-SP-METS- The 36 year old knuckle baller has been ‘Verlanderesque’, 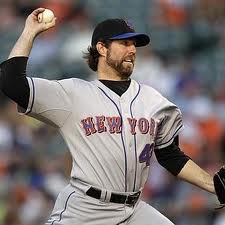 giving up just 3 earned runs in his last three games, all of which he’s won. Dickey has had nine quality starts in a row dating back to July 25th. With his next start scheduled against the offensively challenged Nationals, Dickey, owned in just 20% of Yahoo! leagues, is a must streamer.

WADE MILEY-SP-DIAMONDBACKS- Miley, for those of you scratching your heads, is a rookie who’s only pitched in four major league games. The 24 year old lefty has done an admirable job thus far. Discounting his debut vs. the Braves, where he had a case of the jitters, the next 3 games he pitched were gems. He gave up 2 earned runs or less in each of them and won all three. He goes against the Pods on Saturday, at home.

ZACH BRITTON-SP-ORIOLES- Even though Britton has had to face the Yankees twice in his last four games, the 23 year old- 3rd round pick of the Orioles fared pretty well, striking out 17 in 23 innings. He also won the last 3 out of 4 games- his lone loss coming vs the Bronx Bombers. His next start is against the Rays who Britton beat 3-2 last Friday. Available in 83% of Yahoo! leagues, he is ‘streamer ready’.

AARON HARANG-SP-PADRES- Sporting a 13-5 record, we’re not sure why is is only 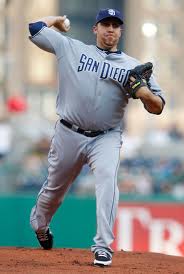 owned in 39% of Yahoo! leagues. Harang, in his last 4 games, has given up just 2 earned runs or less and has struck out 24 in 26 innings pitched. His next start will be on Monday in San Francisco vs the Giants who Harang just beat 3-1 yesterday, giving up 1 run in 7 innings on just 4 hits. Grab him if you still can. 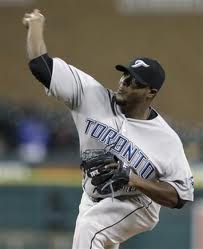 (1.39) are a bit too hefty for a closer, we think if you’re looking for some cheap saves down the stretch, then he’s your man. In his last 6 appearances, in a total of 7 innings, Francisco has given up a total of just 2 earned runs while he has collected 3 saves. His last blown save was back on July 1st vs the Phillies. He is currently owned in 43% of Yahoo! leagues.