In the last of our Sleeper and Deeper Sleepers to consider, we tackle Starting Pitchers and Relievers. There are some gems, if you wait for the last few rounds of your draft, to snatch up and possibly end up gaining an edge in your league. You don’t have to go with the more well-known named pitchers out there like Ervin Santana or R.A. Dickey who are overrated and apt to disappoint.

SLEEPER: SP-Danny Salazar-Indians- A late season post All-Star call-up, this 23 year old had a Seaver-like debut in the majors striking out 17 batters in 13 2/3 innings his first two starts; both wins. In the 52 innings he pitched last season the rookie struck out 65  (a strikeout rate of 30.8%). His ERA was an impressive 3.12. Salazar’s WHIP was 1.13 and his BA was a miniscule .226. If the Indians give him some decent run support, we are predicting that Salazar could end up in the top 15 of all MLB pitchers.

#31 SP Danny Salazar could be a top pitcher in the M.L.’s if he picks up where he left off last season. Photo:
Jerry Lai, USA TODAY Sports

DEEPER SLEEPER: SP-Ian Kennedy-Padres- This former first-round pick and hot prospect of the N.Y. Yankees in 2006, had an unimpressive year with the Diamondbacks in 2013 finishing with a 7-10 record and and a high 4.91 ERA. However he will now pitch in a much more ‘spacious’ Petco Park as a member of the Padres so if you want a low risk/high reward late rounder, you could do worse than Kennedy, just 29 years old, who brings his 163 strikeouts from last season with him to San Diego.

HOT PROSPECT: SP-Noah Syndergaard-Mets- If you are in deeper leagues or you have bench room, do not let this phenom-to-be pass you by on draft day. His stuff is wicked! He can throw 97 MPH and has the nastiest curve ball you will ever see. And, as an additional bonus, he will play in one of the more pitcher-friendly parks in the major leagues; Citifield. There is a possibility that Sndergaard will not be called up until around June but we think it will be earlier, and he will be well worth the wait!

SLEEPER: RP-Cody Allen-Indians- Assuming that Allen will secure the closing duties in Cleveland now that RP Chris Perez is no longer with the club, the youngster has all the makings of a quality closer for years to come. In 77 relief appearances last season, Allen struck out 88 batters while walking just 26 and his ERA/WHIP slash line of 2.43/1.25 certainly qualifies him to close. His only weak point is the long ball, which last season was about the league average. Hard to believe this future closer was the 698th pick in the 2011 draft!

#37 Cody Allen has impressed with his stats from last season and is set to become a viable replacement to ex-Indians closer Chris Perez Photo: Chuck Crow-Plain Dealer

DEEPER SLEEPER: A.J. Ramos-RP-Marlins- Strictly for much deeper leagues and formats, Ramos will only be viable to fantasy owners in the event that closer Steve Cishek finds himself traded by July should the Marlins have another poor showing to start the season. Ramos was serviceable enough in the second half of last season, posting a 2.51 ERA to go along with 38 strikeouts in 32 innings.

Now that we have told you about the players, both hitters and pitchers to AVOID drafting, we have now listed the players who we think will be Sleepers To Watch this season. We begin with the pitchers, both starters & relievers. (Hitters will follow…) Good luck in your drafts!

Steve Cishek-RP-Marlins- Not exactly a household name in most of the country, Cishek, who took over as Miami’s closer when Heath Bell struggled last season, will begin this year as their closer as well. With only 18 career saves on his resume, he is definitely Sleeper material if he can keep the bases on balls down. Last year he gave up passes to 29 batters in just 63 innings of work but has kept his ERA down to a respectable 2.57 in 116 career appearances. His biggest obstacle however, will be the lack of run support by a Marlins team with players named Adeiny Hechavarria, Donovan Solano, Rob Brantly, and Justin Ruggiano on the field. Not a first tier closer but one that could possibly net you 28-32 saves this season.

Sean Doolittle-RP-Athletics- In deeper roto leagues, this novice who only has one major league season to his credit, could turn out to be a huge Sleeper if current closer Grant Balfour should struggle. And at 36 years of age and just one season as closer under his belt, you never know. If Doolittle is called upon to close at some point in the season, he would be a natural. His 17.3K/9 rate in the minors plus last year’s 11.4K/9 with the Athletics, are proof enough. In 47 innings last year, he struck out 60 and walked just 11. We think, if given the opportunity, Doolittle will ‘do a lot’ for your team. Keep that name in mind… 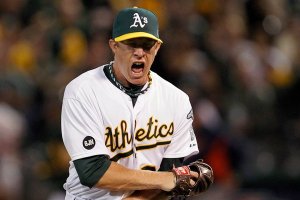 #62 Former slugging 1st baseman, Sean Doolittle is pumped for the upcoming season. A SP sleeper to watch for! Photo: nytimes.com

Homer Bailey-SP-Reds- What a second half of the season he had! 100 strikeouts against just 24 base on balls. Plus an amazing September where Bailey struck out 9 batters or more in a game three times. Don’t forget to throw in a no-hitter and a post season game vs the San Francisco Giants when he struck out 10! So why are we touting him as a Sleeper? Because as of this writing, Bailey is not getting the attention he deserves in draft rooms, going at about 175-180 in most leagues. That’s way too high for someone we think will finish the 2013 season with 16 wins, 170 strikeouts, 3.66/1.21 and an almost sure shot to log 200 innings.

Hisashi Iwakuma-SP-Mariners- After being a starting pitcher in Japan, the Mariners brought him in and placed him in the bullpen for the first half of last season where he put up a 4.75 ERA and 1.42 WHIP. Then, after returning to a starting role, he abandoned the mediocrity and went 8-4 2.65 ERA and 1.23 WHIP. Based on that performance, Iwakuma was given a two-year extension and if he can keep the long balls down away from Safeco Field, he should thrive. We look for Iwakuma to go something like 15-7 with 150K’s and 50BBs to go along with a 3.57 ERA and 1.22 WHIP.

Glen Perkins-SP/RP-Twins- Perkins, coincidently like Iwakuma but in reverse, languished as a starter before getting the opportunity to relieve and finally, last season, become the Twins’ closer. The has thrived in both areas and, if manager Ron Gardenhire who is the Mike Shanahan of baseball, sticks with Perkins, then we think he could be Sleeper material. After the All-Star break he went 12 for 13 in save opportunities and should build on that this season. We’re looking at around 30 saves with a 2.60 ERA and 1.12 WHIP.

#15 Glen Perkins picked up 12 saves in 13 chances last year after the break & should build on that. Photo: Ronald Martinez/Getty Images North America

Players from losing teams make up this week’s group of waiver wire pickups. Two of them played their entire careers in Pittsburgh before getting traded at the start of this season. Here are this week”s pickups to consider:

Ryan Doumit-C,OF-Twins- This veteran switch-hitter, formerly a 2nd round pick of the now surprising Pittsburgh Pirates,  is the 6th highest ranked catcher in Fantasy Legues over the past two weeks; ahead of 93% owned Mike Napoli as well as 95% owned Brian McCann! During that span he has hit 3 HRs, drove in 11 and scored 7 runs while batting .313. He has 10 multi-hit games this month alone. Doumit, who also qualifies in two positions, is owned in 40% of leagues although that figure should be higher.

#18 Ryan Doumit has been ranked higher over the last two weeks than several higher priced catchers. He’s worth a look.. Photo: twinsdaily.com

Carlos Gomez-OF-Brewers- This speedster has been showing off some power of late and has already matched his career high for home runs (8) in a season. It’s a small number to be sure but remember he’s done it in just 197 ABs. The former N.Y. Met looks to have grabbed the starting CF position from OF Nyjer Morgan whose numbers are way down. Over the past two weeks Gomez has collected 3 HRs, 9 RBIs, scored 9 runs and stolen 4 bases while batting .333 (8-24). The only downside to Gomez’ game is his batting average which stands right at his career mark at .244. However, if you’re in need of SBs, his 18 so far this season is the most he’s had since nabbing 33 back in ’08. And his SLG % of .448 and OPS of .743 are the highest in his 6 year career. Gomez is owned in just 15% of leagues.

Paul Maholm-SP-Cubs- Another ex-Pirate, (8 years), Maholm is one of the hottest pitchers in the N.L. In his last 5 starts he’s posted a perfect 5-0 record, struck out 27 and walked only 5. During this stretch he’s ERA has dropped from an inflated 5.38 to a more serviceable 3.88 and in no game did Maholm give up more than 1 earned run. The former 1st round eighth overall pick in the 2003 draft in on pace to have his most wins in his career. The southpaw has also been rumored to be traded back to the Pirates  so stay tuned as that will only help his numbers. Only owned in 30% of leagues, he’s definite flier and streamer material, and should be owned in deeper leagues 12+. 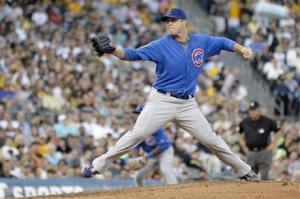 Steve Cishek-RP-Marlins- Since manager Ozzie Guillen took the closing job away from Heath Bell at the All-Star break, Cishek has been brilliant! Since July 14th, he has had three save opportunities and was successful each time. His numbers for the season are almost flawless, especially when you consider he’s pitching for an under achieving Marlin’s team that was expected to be a much improved group this season. Cishek is 4-1 with 41 K’s,  19 BB’s, and a 1.87 ERA; an ERA that tops all the other Marlin’s relievers. Although we don’t know when or if Bell (5.66 ERA) will get a shot at closing again, there are currently no signs of Guillen giving up on the youngster who has not allowed a run in 10 1/3 innings. He’s owned in 28% of leagues and should be a must add for those in all leagues in need of saves.

Denard Span-OF-Twins- Another speedster, Span has been on fire over the past week or so. In his last eight games he has scored 8 runs, collected 12 hits, 5 doubles, 2 stolen bases batted .458, and has 4 multi hit games. He’s brought his average up to .287, just about at his career mark, and on Sunday he scored his 50th run of the season. Although injured for most of the season last year, in 2010 and 2009 he had 26 and 23 stolen bases respectively. So again, if you have a need for speed, take a flier out on Span who is owned in just 17% of leagues. A must in A.L. league only and deeper leagues.

Twins Denard Span has batted .458 over the past week and has scored 8 runs in his last eight games. Photo twinslove.blogspot.com