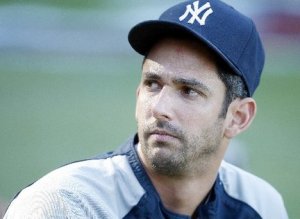 A 24th round pick by the New York Yankees in the 1990 Major League Baseball Draft, Jorge Posada had a long wait before his journey really took flight wearing pinstripes. He only played in one game in 1995; his debut with the Yanks, and then just eight more after being called up late in ’96. He replaced Jim Leyritz in 1997 as the backup catcher to Joe Girardi and didn’t become the full time catcher until 1999.

It was during the late 1990’s, and into the decade that followed, that Jorge, Andy, Derek, and Mo became known as the “Core Four”. They all came up through the Yankee ranks and three out of four of them have played their entire career with New York! Posada went on to achieve some amazing feats such as becoming a 5 time All Star and a 4 time World Series Champ. Like the other three Core players, Jorge always played hard and gave his all. At the height of his career he was a great offensive as well as defensive catcher and a true fan favorite.

Fast forwarding to 2011,  it has become quite evident that Posada’s numbers and skills have greatly declined, and it’s sad to witness this whether you’re a Yankee fan or not. When an athlete is on his game, it’s easy to want to stay ‘at the dance’. It’s when Father Time takes over that he needs to know when to leave the floor… For Jorge, who turned 40 yesterday, it might be time to do the latter. In doing so, he’ll be the second of the Yankee ‘Core Four’ to do this, as Pettitte retired at the end of last season.

Posada doesn’t seem to think his playing days are over given that he already has announced that he would welcome the opportunity to play elsewhere next year- should the Yanks not opt to retain him. Most athletes truly want to stay at that ‘Last Dance’ . For Jorge, the band might have already stopped playing….