….and the winner of Super Bowl XLIX is…The “DE-FLATERIOTS!”

Haven’t heard enough ranting and yapping over today’s big game? Good! Then here’s possibly the last few words you will hear about “The Game”….

First, a disclaimer; we are not fans of either New England or Seattle and therefore have no vested interest in the outcome of today’s game. Having said that, and strictly as a sports site, we have selected the New England De-Flateriots as today’s winners of the Super Bowl. No matter how many pounds of pressure are in the footballs at Sunday’s game, they just have such an abundance of more talent and experience; like Brady & Belichick for starters.

“Forget the air pressure in the footballs Tom. I have other things up my sleeve…”
PHOTO: AP

Any of those who witnessed the implosion of the Green Bay Packers in their championship game against the Seahawks a few weeks ago, will have come away feeling that luck was truly on Seattle’s side that afternoon. Can history repeat itself? Sure! However, luck can also run out. Just ask any gambler at the tables in Vegas. And besides, when you play New England, you better have more than luck on your side!

The Pats have found themselves in quite a precarious situation. In the court of public opinion, they have been found guilty of “ball-tampering”, of sorts. They lose this game and there will be those who will say it’s because of the tightened security on the field with respect to the air pressure of said footballs. Given “spygate” and now “deflategate”, should the Pats win, there will be the naysayers who will believe that Bill Belicheat has found yet a new angle, a new edge if you will with which to gain the ‘ultimate victory’; one that we’ll all be reading about in the days and weeks following the game.

In the end, like most sports enthusiasts, we do not want to see a lopsided contest like we have sat through so many times in the past. Unfortunately, we think we could be in for just that kind of game today in Arizona. Our prediction: Pats 37 ‘Hawks 21 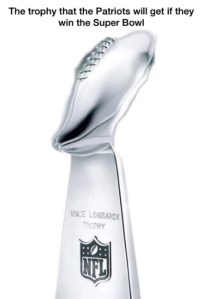 VIDEO of the WEEK: After a stellar triple-double, Russell Westbrook plays, “Diss The Press”….

Three time All-Star Russell Westbrook and the press will never be ‘buddy-buddy’, of that you can be sure. He has infuriated and frustrated them throughout his career and after an impressive 127-115 victory over the Golden State Warriors on Friday, January 16th, Westbrook was at it again.

#0 Thunder guard Russell Westbrook seems disinterested at most of his post-game press conferences and this past weekend was no exception. Photo: US PRESSWIRE

After completing a stellar triple-double comprising of 17 points, 17 assists, and 15 rebounds, the media was all over him like an ant at a picnic only to face monotone and repetitive responses from the talented three time All-Star. This is the post-game interview that left reporters so miffed:

FROM all of us here at FANTASY FURNACE to all of our readers, followers, friends and fans, we want to wish you and your families all the blessings and happiness for a safe and peaceful Thanksgiving!