Fantasy Baseball Pickups: In some leagues, these 2 Mets are a ‘must’…

As most of us are preparing for, or already enjoying the long Holiday weekend, we thought we would sneak in some players for you to ponder over your Barbeque & Pool parties. The All-Star break is approaching so between the holiday & the A.S. Break this could be your chance to gobble up some hidden little owned N.Y. Mets talents who are on the waiver wire.

Jeremy Hefner-SP,RP-Mets– 5% owned- Very quietly Hefner has turned in some real nice performances during his last half-dozen starts. He has not allowed more than one earned run in five of those starts boasting a 1.70 ERA since June 4th.

Now in his second major league season, Hefner has recorded quality starts in seven of his last eight games while garnering a 2.20 ERA going back to May 24th. On the season Hefner’s 71K/27 ratio is impressive as well. He’ll make the perfect streamer in mixed and N.L. only leagues as he’ll go up against the punchless Milwaukee Brewers next.

#53 Jeremy Hefner has had a nice run, a low ERA & a serviceable K/BB ratio over the past six games. Photo:Jeff Zelevansky/Getty Images North America

Josh Satin-1B-Mets-1% Owned- Satin was a  late round pick of the Mets in the 2008 draft, (he was picked by the Mets in the sixth round -194th over all- 176 selections after the Mets chose Ike Davis). He has spent the bulk of the past five years in Triple-A and when Ike Davis was sent down on June 11th, Satin had finally be given the opportunity to play everday and show the club why he shouldn’t be sent back down once Davis returns.

Recent call-up Josh Satin who has reached base in the last 13 games, is shown here doubling in a run in Tuesday’s game vs the Diamondbacks. Photo: Barton Silverman/The New York Times

The way Satin has been hitting it will be hard for Terry Collins, who worked with Satin on his swing back in 2010, to let him go as the Mets have been struggling offensively all season. Satin meanwhile has been on a modest 8-game hitting streak and has hit safely in 11 of his last 12 games. Because he walks so often (10 in 41 ABs) as well as hits (16) his OPS is up there at a respectable 1.071 while his .390 batting average is more than the club expected from the 28 year old.

We can’t predict that Satin will sustain this kind of productivity given that he has only played in 32 major leagues games in his career, but why not be part of the ride he’s on? Satin could certainly be that ‘silver lining’ for those in deeper leagues and N.L. only leagues at least until Davis’ imminent return and possibly beyond.

Have a safe and happy Fourth!!!

We posted one of these Facts & Stats articles about a month ago and received so many positive and complimentary emails that we agreed to slap up another one. We don’t need to have our arms twisted that tightly to cave in to your requests, so back again, by popular demand, are more Facts & Stats in MLB. Enjoy and feel free to comment if  you find them interesting and if there is one or more that you didn’t know and really surprised you…

Did you know that…

1. The New York Mets have won two World Series, both of which aired on Country Western radio stations in New York; WJRZ in 1969 and WHN in 1973?

2. Going into Tuesday night’s game Andre Ethier had 20 RBIs but led the N.L. at this same point last year with 55?

3. Athletics closer Grant Balfour, as of June 20th, hasn’t blown a save in more than a year? He has converted his last 34 consecutive chances.

#50 closer Grant Balfour has been immuned to blown saves since 2012. Photo: associated press

4. The three highest batting averages over the past two seasons in the major leagues are Miguel Cabrera .339, Joey Votto .332, and Yadier Molina .327?

5. The Mets finished Monday, June 17th’s game at 1:22 a.m. and then played a day-night double-header vs the Braves making it three games played on the same calendar date? The last time this was done was on August 23, 1996 by the Cincinnati Reds; in two different cities!

6. The fastest ball thrown in the major leagues this season was by Matt Harvey (100.2mph) vs Jason Heyward of the Braves on Tuesday, June 18th?

7. A little over two weeks ago, on June 5th, the Chicago White Sox needed 17 hits, 8 pitchers, and 5 1/2 hours over 16 innings to end their 8 game losing streak as they beat the Seattle Mariners?

8. Dodger’s top prospect Yasiel Puig became the 5th player to collect 27 hits in his first 15 games? One of the other players was Joe DiMaggio.

9. Shaun Marcum with his loss to the Braves on June 19th, became the 1st Mets pitcher to start the season 0-9 since Anthony Young in 1993?

#26 2B Dan Uggla of the Braves kicks his bat in disgust after one of his league-leading strikeouts. Photo AP

The N.Y. Mets Fall from Grace (and the standings…)

Just when you thought it was safe to become a proud New York Mets fan again, they find another way to “Build you up, buttercup baby just to let you down!” Six games over .500 at the All Star break and just 1/2 a game out of the wild card race, it looked like the Metropolitans were finding a way to overachieve themselves right into the playoffs. 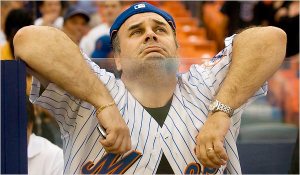 This disgruntled Mets fan’s face is one of many who have watched his team implode since the All Star break. Photo: John Dunn for The New York Times

However injuries and a lot of bad luck has pulled the rug from right underneath them of late and we’re now witnessing the unravelling of one of the most biggest surprise teams through the first half of the season. Losers of eight of their last nine games since the break, the Mets have found themselves at 47-48, placing them below .500 for the first time this year.

Now they’ve slipped to 8.5 games out of 1st place in the N.L. East, safely tucked away in third place and 5 games out of the wild card race after their weekend sweep at the hands of the L.A. Dodgers. Their pitching staff has been a regular *M*A*S*H* unit, starting with Mike Pelfrey who went down after just three games before having Tommy John surgery. The loss of Dillon Gee to a blood clot in his throwing shoulder was followed by the latest news that the first N.Y. Met to pitch a no-hitter, Johan Santana, was headed to the DL to heal a badly sprained ankle, to rest, and to give his surgically repaired shoulder some extra time off. Should the Mets fall too far out of contention, it wouldn’t be at all surprising if they opt to shut Santana down for a part or the remainder of the season at that point. 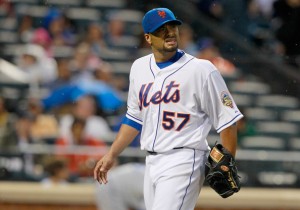 #57 SP Johan Santana, who has been ineffective in his last few starts, has been placed on the 15 day DL with ankle soreness and for rest. Source: Mike Stobe/Getty Images North America

41 year old SP Miguel Batista, who has started five games for the Mets this season has been totally ineffective as witnessed by his latest fiasco in yesterday’s game where he threw 81 pitches in only three innings allowing four runs on five hits and three walks. Not much relief in sight as the much hyped prospect Matt Harvey, scheduled to come up to the majors after another start, allowed six runs on seven hits in just five innings in a 11-0 Triple -A loss on Saturday night.

If the Mets are to salvage the remainder of the season, then they will have to be buyers and go out and find some free agents to help head off their recent implosion. And it’s not just starting pitching that’s had the biggest impact on their downward spiral; their bullpen, who entered Saturday’s game with the worst ERA (4.95) in baseball needs an overhauling as well. 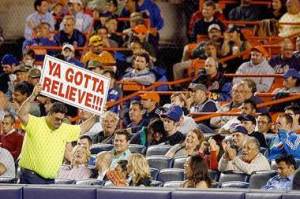 This savvy Mets fan realizes the importance of good relief pitching at the major league level; an area that’s been problematic for the Metropolitans. Photo: nj.com

Relievers Jeremy Hefner from Triple-A Buffalo and Elvin Ramirez will be recalled from Buffalo probably before Sunday’s game, but  they’ll need more ‘relief’ than that- and in more ways than one if they want to stay competitive going into the dog days of summer and beyond.