Was there another New Orleans Bounty? C’MON MAN!! 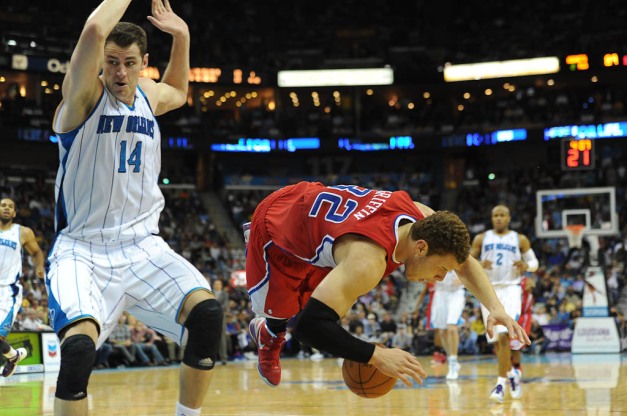 Blake Griffin tumbles to the hardwood after being side-swiped by Jason Smith of the the N.O. Hornets. Photo: Parker Waters

With 4:06 left to go in a game that was won by the 12-35 N.O. Hornets 97-90, Jason Smith, on a fast break, body slammed Blake Griffin who laid on the floor for several seconds. The foul was assessed as a flagrant 2 which was followed by an immediate ejection and subsequent 2-game suspension. As Smith made his way to the locker room he waived his arms encouraging the crowd of 17,209, who gave him a tremendous ovation. It was truly basketball at its worst…

This week’s Sleeper Pick of the week: Greivis Vasquez

New Orleans Point Guard gets first start of the season…

Hornets PG Greivis Vasquez drives against Mike Conley of the Grizzlies. He is our Sleeper of the Week! Photo: Rusty Costanza, The Times-Picayune

As we tweeted at 3:20 this afternoon, we urged those in fantasy leagues to grab PG/SG Greivis Vasquez of the New Orleans Hornets off of waivers. Marco Bellinelli and DaJuan Summers have been struggling and so coach Monty Williams Jr. has been giving Vasquez some extra minutes in the last four games. However on Wednesday, Vasquez played for 28 minutes and scored a career high 20 points and 12 assists. He also added 6 rebounds, 3 threes, and a steal.

Over the past four games he has averaged 12.3 points, 7 assists and 2.7 boards. Tonight, as expected, coach started the 28th all around pick of the Memphis Grizzlies in the 2010 draft and he has continued to impress with his hot shooting and all around great play. He finished the game vs the Spurs with 16 points and 5 assists. He also added 3 rebounds and 2 steals. He played just under 34 minutes, more than any other Hornet and took more shots (14) than any of his teammates. He’s focused, quick, “agile & mobile” (as Walt Clyde Frazier would like to say). He’s 14 for 24 in his last two games; shooting at a 58% clip, scoring 36 points with 17 assists.

So there is no doubt, at least for the moment, that the starting point guard position for the Hornets is Vasquez’ to lose. Coach Williams has shown a lot of confidence in the 2nd year guard out of Maryland and we believe he should be picked up in all leagues and formats- as soon as possible! He is currently owned in just 9% of Yahoo! leagues.