Well, we’re just around the corner from the Football season finally beginning and as draft rooms have been booked (and some of you have even begun drafting already), we thought it would be a good time to begin our Pre-Draft series of articles with our analysis and advice. The first of our three pre-season articles, Sleepers to Consider, will be followed by Busts: Players to Avoid Drafting, and then Rookies Worth the Risk.  As always, from all of us here at Fantasy Furnace, have a good draft, keep active on the waiver wire, and good luck this season!

Sleeper candidates usually are made up from formidable handcuffs. They are not always featured starters but players who enter the season as backups just waiting for their opportunity to prove to their coaches and teammates how talented they really are. Case in point is Redskin’s RB Alfred Morris who wasn’t even on most fantasy draft boards at the beginning of last season. However with his 1613 rushing yards and 13 touchdowns, a sleeper was born…

1. Rueben Randle-WR-Giants- A sure thing to start the season as New York’s No. 3 wide receiver behind Hakeem Nicks and Salsa legend Victor Cruz, Randle could very well end up as the team’s No. 2 if and when the oft-injured Nicks experiences additional knee issues. In a limited  role last season, Randle had 19 receptions for 298 yards (15.6 YPR), and three touchdowns and that was with TE Martellus Bennett on the team. Bennett will take his 626 yards and 5 TDs to Chicago which leaves even more opportunities for Randle who is a late round pickup capable of ending up being fantasy relevant at some point in the season.

2. Joseph Randle-RB-Cowboys- Rest assured that we are now officially running out of Randles… Seriously though, here is another example of a backup running back with the potential of taking over the starting back’s role in Dallas. DeMarco Murray, who will begin the year as the Cowboy’s featured back, has the talent to finally have that breakout season that many thought he would have last season. His problem is that he just can’t stay healthy. Over the past two seasons, Murray has missed nine games and if injuries take him off the field again this year, it will affaord Randle, just a fifth round pick, to show that his 38 touchdowns and 71 receptions at Oklahoma State were no fluke. For those of you in PPR leagues, Randle makes a fine pickup, also in the later rounds.

3. Carson Palmer-QB-Cardinals– One doesn’t usually think of an 11th year veteran as a ‘Sleeper Candidate’ but that’s exactly what Palmer will be entering this season. Last year with a receiving corps in Oakland that one would not have described as ‘elite’, Palmer threw for his third highest single-season total yards (4,018). Now, with his move to Arizona, he will have better weapons with which to work. Receivers such as stud Larry Fitzgerald, 1st round pick Michael Floyd, and veteran Andre Roberts. If you play in a league with a two-quarterback format or want an experienced quarterback who can fill in if your QB1 gets injured, then you should think about grabbing Palmer in the latter part of the third and early into the fourth round.

4. Lamar Miller-RB-Dolphins- With Reggie Bush gone and the Dolphins lacking any confidence in the oft-injured Daniel Thomas, we would be surprised if Miller, who boasts a 4.40 40 doesn’t begin the season as the Fish’s leading RB. In a very small roll last year the 5′ 10″ 218 lb. back averaged just under 5.0 YPC on 51 carries. Miller makes for an excellent RB2 sleeper and will probably come off most standard boards somewhere in the fourth round.

5. Martellus Bennett-TE-Bears- This former Cowboy who played in the shadows of one Jason Witten, finally received the opportunity to turn in what many expected to be a breakout year with the Giants last season and would have done just that had he not played hurt after hyperextending his knee in week 5. The 6′ 6″ 265 lb. TE now has another chance after moving to Chicago in the off-season. Hooking up with Jay Cutler and playing under Marc Trestman, a  strong advocator of the West Coast Offense, Bennett follows TE Kellen Davis who dropped more passes than he caught! We expect that Bennett, if healthy, will have his first real breakout year with the Bears. 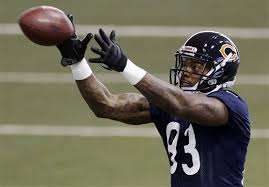 #83 New Bears TE Martellus Bennett is poised for a breakout year in Chicago after his 626 receiving yards and 5 touchdown season with the Giants last year. Photo: AP Nam Y. Huh

6. Danny Woodhead-RB-Chargers- The ex-Patriot is in a perfect spot to become a sleeper candidate in San Diego. There’s Ryan Mathews, the featured back, who can’t seem to stay healthy in front of him and Ronnie Brown who basically was a third down back last season behind him. If, and when Mathews gets injured again, expect Woodhead to carry more of the load and become more important in PPR leagues as his 40 receptions and three touchdowns last season will confirm. The Chargers did well to get Woodhead in the off-season, but also needed more of a featured back as Woodhead checks in at only 5’8″ 200 lbs., not your prototypical RB, but one that can be more than serviceable in the later rounds.

7. DeAndre Hopkins-WR-Texans- Rookie receivers are tough to gage when it comes to fantasy, however we feel that Hopkins could be this year’s version of T.Y. Hilton. The 21 year old out of Clemson, left a year early and takes his receiving records in yards (3020) and touchdowns (27) with him to Houston. As a potential starter opposite the always threatening Andre Johnson, Hopkins has the opportunity to show the run-heavy Texans that they can have a above average aerial attack as well. Keep him on your radar in the late rounds of your draft in deeper leagues as a flex or WR3 option. The 27th over-all pick will not disappoint.

#6 DeAndre Hopkins hauls in a TD pass last Sept 1st; one of 27 he would have in his 3-year career with the Clemson Tigers. Photo by Kevin C. Cox/Getty Images:

8. Dustin Keller-TE-Dolphins- Discounting last season which held Keller to just 8 games due to injury, the 28 year old, with Jets QB Mark Sanchez under center, had 120 receptions for 1502 yards and 10 touchdowns in the two seasons prior. Dolphin’s quarterback Ryan Tannehill, one of the leagues rising quarterbacks, will call upon his tight end frequently, affording Keller a chance to put up sleeper-type numbers this season. He can be had cheaply in deeper leagues and could just prove to be a bargain late in the draft.

“I want everyone to know that as disappointing as this is I don’t want anybody feeling sorry for me,” Keller said in an email to NFL.com. “I promise I’m going to come back stronger, faster and be a better player than before. I’d like to thank all my family, friends and teammates for their prayers and support.”

9. DST-Atlanta Falcons- Yes, you can even find a sleeper in the Defense and Special Team category.  Starting with the Falcons, their biggest downside was their lack of sacks, however they still managed to allow fewer than 20 points a game. Their secondary which amassed a multitude of interceptions, has been made even better thanks to their first-round pick Desmond Trufant, and if ex-Giant Osi Umenyiora can stay healthy, he will help provide the Falcons with more sacks and QB hurries than last season.

10. DST-St. Louis Rams- The Rams, who will probably be available late in the drafts as they have not been known as one of the league’s stalwarts, are a sneaky sleeper in this category. People forget that the combination of Robert Quinn and Chris Long accounted for 22 sacks last season. The middle of their defense received a huge upgrade when first-round pick Alec Ogletree was selected in the draft, and he is a keeper! Veteran ex-Titan headcoach Jeff Fisher, already having one season under his belt with the Rams, will use his defensive talents to shore up an already serviceable defense; one that should also be had in the later rounds of your draft.