Two ways to get PED’s out of MLB…

When is enough, enough? The Performance Enhancement Drug issue is like a strain of the Flu…it has become impossible to go more than a season without news popping up about another strain. The two are also similar because although there are ways to control them to some degree, there has been no cure to date.

Ryan Braun and Alex Rodriguez are two of those implicated in the Biogenesis scandal who are facing possible suspension. Photo: GettyImages

All the while, “the game” continues to be tarnished while fans become more and more cynical. Any news about a player having an ‘unusally good season’ emotes fears that he is probably “taking something”.

The innocence that baseball once enjoyed has all but vanished. Ball players used to be highly regarded heroes to a generation once upon a time. Over the past two decades they have, instead, turned into businessmen with obscenely inflated contracts, many of which at some point will probably be accused of or punished for ingesting or getting injected with some sort of illegal substance.

So the question continues to be raised again and again…How does MLB attempt to put an end to this travesty that PED’s and its widespread use has created?

There are two ways to cut down and hopefully cut out PED’s from baseball. We’re not saying that they’re unique nor will they fully deter users-to-be from obstaining permanently, however it could (and should) greatly minimize its usuage. It might sound ‘Polyanna-ish’ in its approach, but since nothing else has worked why not implement these two new rules?

1. Automatic exclusion from the Hall of Fame- It’s quite simple really. If taking PED’s are “illegal” then MLB needs to enforce it with the same passion they have when someone is caught gambling on baseball while playing or coaching. Let baseball come down on players with the same verocity and determination that confronted a certain Hall of Famer; Pete Rose.

If you asked 100 fans who they thought should be in the Hall, Rose or A-Rod how many of you would seriously think that the majority would select A-Rod, the Poster Boy for PED’s?

Alex Rodriguez always seems to be in every discussion & scandal evolving around illegal substances.

This rule would do nothing for those players who do not aspire to make the Hall or for those who are not even All-Star material. When I saw that one of the names on the list of players allegedly involved with the Biogenesis scandal was recently sent down catcher Jesus Montero, I found myself scratching my head. Players like that are probably never going to see the Hall of Fame unless they take a vacation to Cooperstown.

2. If you are caught, you face suspension-without pay–  The best place to punish someone for breaking the rules of the game is their wallet. If faced with suspension without pay that could make a player be more mindful of the consequences before they take that injection..And I would increase the amount of games that a player can be suspended. Again, simple. First offense? 162 game suspension without pay. Second time offenders? Banned for life.

Too harsh? Well then how is it amicable and fair for Pete Rose to continue on his suspension which is now in its 24th year when he was a first-time offender at the time he was caught gambling on baseball? If gambling on the sport is illegal and the use of PEDs are illegal as well, why should the punishments be different? Pete Rose lied about his offense? Well didn’t Sammy Sosa, Mark McQuire, Rafael Palmeiro, and Roger Clemens lie as well? Enough is enough…

Pete Rose shown here 3 years ago in a pre-game ceremony has now been banished from baseball for almost a quarter century. Photo: associatedpress

Carl (“The American Idle”) Pavano: Is he unlucky or very lucky…

Entering his 15th year in the Major Leagues, starting pitcher Carl Pavano has had his share of bad luck through a vast array of injuries but has always managed to stay employed. And his pain and suffering has not been  just your everyday more common ailments, but bizarre and freakish ones that continued to sideline him throughout his career.

He got his start in professional ball when he was selected in the 13th round of the 1994 amateur draft by the Boston Red Sox. In one of the Red Sox’ more famous trades, Pavano, along with Tony Armas Jr. were dealt to the then Montreal Expos for one Pedro Martinez. He made his debut on May 23, 1998 and went on to pitch for 4 1/2 seasons with the Expos, ending up with a dismal record of 24-35 in only 78 starts. His ERA was a meager 4.83. The only memorable thing that he did in 1998 was give up home run number 70 to a juiced up Mark McGwire.

In mid-season of 2002, he was traded to the Florida Marlins and it was there that the onset of his injury plagued career began. After the Marlins won the World Series in 2003, Pavano went on to have his best season in the majors in ’04 when he went 18-8 with a 3.00 ERA. It was off of that performance that the Yankees decided to sign him to a four year $39.95 million dollar contract, which, as it turned out, was one of the worst deals that the Bombers ever made. It rivaled the disastrous trade of SP Ed Whitson from the San Diego Padres back in the 80’s.. one of the worst in Yankee history, but that’s another story. 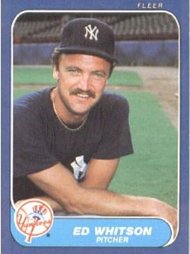 Another Yankees bust from the mid 80’s SP Ed Whitson.

Amazingly, Boston, Cleveland, and Cincinnati actually offered Pavano bigger deals but he decided to accept the Yankees offer feeling that he would have a better opportunity to get to the Post Season in New York. And then the barrage of injuries began to overcome Pavano and further frustrate Yankee management as well as the fans. In June of 2005 he injured his right shoulder and went on the DL. He finished that season making only 17 starts and finishing 4-6 with a 4.77 ERA.

In 2006 he began the season by injuring his buttocks in Spring Training. He remained on the DL and only made a few minor leagues starts before returning to the DL in August when he broke 2 ribs in an automobile accident. He did not make one start in the majors in 2006. After he was named as the starting pitcher opening up the 2007 season (Chien-Ming Wang had injured his right hamstring), our man Pavano once again returned to the DL on April 15th with what was described as an “elbow strain”. On May 23, 2007, it was reported that Pavano would opt for Tommy John Surgery in his elbow.

There were many headlines like this on the back covers of N.Y. Newspapers during Pavano’s injury riddled time in N.Y. Photo: timesunion.com

He wouldn’t make his next start until August of 2008. On September 14th, after allowing just three earned runs over six innings, and after a visit from Joe Giradi, Pavano walked off the field with what was a left hip injury. He was greeted by a chorus of boos from the Stadium fans.

He was traded to Cleveland in 2009, and then to the Twins where he remains to this day. He is back in the news once again as earlier this week Pavano damaged his Spleen while shoveling snow outside his Vermont home. He will remain out, for what has been reported,  6-8 weeks. And the hits just keep on coming…

Point is he has had a great deal of financial success over his career, amassing over $50 million in salaries (not including incentives) over his 14 year career; one that has seen him win just 108 games or about an average of 8 games a season, while losing 107 with a career 4.39 ERA. Injuries notwithstanding, he has always been employed even with his long history of injuries which begs the question, ” Why?” Just lucky I guess…

One final thought on Ryan Braun and the “Immaculate Injection”…

By now we have all read all the news surrounding Ryan Braun and the missing urine sample which ended up in someone’s house over a weekend. We’ve heard about PED’s, STD’s and BVD’s. (well, maybe not the last one)

#8 Ryan Braun of the Milwaukee Brewers tested positive for PED's then got off due to a 'technicality'. Photo: radarline.com

The bottom line to this whole scenario is that ‘legally’ Ryan Braun got off on a ‘technicality’. A criminal defense attorney would have had a field day with this one in a court of law because of the ‘doubt’ that was created and the suspicion that followed that ‘someone’ might have tampered with Braun’s urine sample. Unlikely, but possible.

Ryan Braun didn’t change our minds or the minds of the multitudes concerning his ‘innocence’ at his new conference yesterday, because no one has been able to explain how his testosterone levels were higher than a Blake Griffin dunk. The average baseball fan has already been looking at their favorite players in a different light ever since the Mark McGwire, Sammy Sosa, and Rafael Palmeiro days, and the ‘Braun incident’ has just set the fan’s perception of the use of PED’s by MLB players back on its heels.

Did Ryan Braun mess up and get caught using some form of  PED’s directly following an MVP season? Yep! Did MLB mess up by exposing a flawed system that allowed Braun’s urine to go unaccounted for 44 hours? Yep! Both are guilty as sin. But when Braun takes the field in April, the skeptics and cynics will probably be looking at him differently. Some might argue that he will join people like O.J. Simpson and Casey Anthony; both of whom were found guilty in the court of public opinion but got off on ‘technicalities’. Time will tell…

Sad, but the reality of this situation is that Ryan Braun and MLB have gone down on strikes on this issue leaving this sport tainted before yet another season even gets underway and the cries of “Play Ball” are heard at stadiums throughout the country. He will be remembered as someone who was guilty- but got off, and not as someone who was innocent all along… 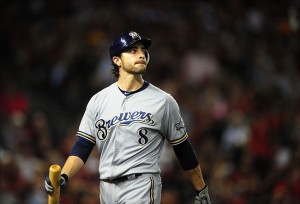 Has testing positive for PED's (but not being punished) disparaged what Braun has accomplished and what he might do going forward? Photo: blogs.thescore.com