We have given you this year’s sleepers and breakout candidates and now we have listed seven potential busts that you should avoid drafting in place of other options. It’s not that they won’t perform well at all, it’s that they more than likely won’t perform well enough! Here are our seven players to be mindful of…

Channing Frye-F-Suns- Last season Frye’s numbers dropped off in points, rebounds, and threes and we don’t think now that Steve Nash has bolted for the Lakers that the going will get any easier for the 7 footer.  Goran Dragic is a solid PG but admittedly he’s no Nash. (Not many are..) The Suns picked up Louis Scola in the off-seasn and he will cut into Frye’s minutes which won’t help his numbers either.

Jose Calderon-G-Raptors- Don’t be swayed by his assist totals (8.8) or his points (10.5) from last season as the 31 year old entering his sixth season with Toronto will move to a back-up role as newly acquired Kyle Lowry will be taking over as the starting PG. His minutes will take a hit plummeting from 34 last year down to around 25. Calderon won’t get you many threes or steals so you’re left pretty much with 7-8 points and assists per game. He is someone that can still be serviceable in later rounds and in deeper leagues but expect a significant drop-off for this guard who is also a defensive liability.

#8 Jose Calderon will see his minutes and productivity decrease with the arrival of Kyle Lowry. Photo: guney.com

DeJuan Blair-C/F-Spurs- The main reason that we think Blair should be avoided at all costs will be his lack of playing time. Once again you shouldn’t expect much more than around 20 minutes a game for the small defender who will play more when the match-ups are more favorable. You can probably see close to 9 points and 6 boards for the fourth year player out of Pittsburgh and when you couple those numbers with his poor FT% and  virtually no blocks, there is no reason to draft him. He could be of use in deeper leagues almost like a streamer in baseball and only when he goes up against an opponent friendly player; more towards his size. 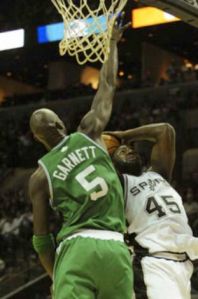 #45 DeJuan Blair is under-sized and a defensive liability against most opposing players. He will  play around 20 minutes per game and thus not be a fantasy factor. Photo: mysanantonio.com

Amar’e Stoudemire-F-Knicks- Over the past four years Amar’e has missed almost 70 games due to assorted injuries; back, groin, knees, etc.. Turning 31 next month, the veteran had some good seasons under D’Antoni’s system but will continue to not find it easy to thrive  along side Mr. ISO, Carmelo Anthony. We are not saying that he shouldn’t be drafted because when healthy he’ll still get you around 17 points and 7 boards and a block or two, but temper your expectations, be aware of his health issues, and check his center eligiblility in your leagues.

Ryan Anderson-F-Hornets- This three point specialist is another Forward who will go off the boards in early rounds in draft rooms everywhere, but he will be a bit too risky to snatch up that early. He’ll have less of a facilitator in Eric Gordon at the point then he had in Jameer Nelson in Orlando for starters and won’t have Dwight Howard around grabbing all of the attention of opposing defenses. When Howard was out towards the end of last season, Anderson did not shoot the ball well at all which gave us our first ‘danger’ sign. Just look back to the Magic’s playoff series against the Pacers (without Dwight) when Anderson shot only 34% and averaged 9.6 points a game. He’ll be a gamble at best and therefore other options might be more appealing to you in the early rounds.

Raymond Felton-G-Knicks-Like Stoudemire, Felton thrived under Mike D’Antoni’s run and gun style of play but current coach, Mike Woodson, has shyed away from that as well as the pick and roll which played right into Felton’s strength. With newly acquired veteran Jason Kidd on board, his presence and savvy could and probably will eat into Felton’s minutes making him even less relevant as a starting PG. He can still give you the occasional three and steal but he’ll score not much more than 10 points and might play around 25-27 minutes per game, his career low. Proceed with caution. There are better options out there late in the draft.

#2 Raymond Felton will see some of his minutes eaten up by Jason Kidd. There will not be the pick & rolls that Felton thrived on under D’Antoni. Photo: zimbio.com

DeAndre Jordan-C-Clippers- Two of the six off-season pickups made by the Clippers will have a positive impact on the team this season; Jamal Crawford and Lamar Odom. However it could be Odom, (who’s pinching himself for the opportunity to get back to playing in L.A.), that might cut into Jordan’s minutes and productivity. It’s well documented how much of a defensive liability Jordan can be and if Odom is coming to the Clippers and can be the Odom of old and not the debacle that we saw in Dallas, then you can just expect Jordan to be useful for his blocks and boards. You’ll probably see more of Blake Griffin and Lamar Odom in the frontcourt also which means 22-25 minutes for Jordan at best.

Key injuries in your league just before the playoffs? Here’s the 411…

With  just 1+ week away from the beginning of the fantasy basketball playoffs, there has been some major injuries to some of your key players. If you haven’t picked up replacements yet, or if you’ve looked but couldn’t find adequate subs, here are some recommendations that might help in your league(s)…

1. Ricky Rubio-PG-Timberwolves- This one hurts (no pun intended). The rookie, who was considered by many to be involved in Rookie of the Year conversations, tore his ACL and will miss the rest of the season. His 10.6 points, 8.2 assists and 2.2 steals per game average will need to be somehow replaced. The logical choice would be PG Luke Ridnour but chances are he’s already been scooped up in your league. Our suggestion would be J.J. Barea. Even though he’s Ridnour’s backup, he will still get you close to 12 points and 6 assists a game as he’lll get more playing time with Ridnour playing the two, (like he did with Rubio in there). Barea is owned in just 15% of leagues.

#9 PG Ricky Rubio is out for the remainder of the season with a torn ACL. Photo: Jim Mone/AP

2. Kyle Lowry-PG-Rockets- Hospitalized for the past 4 days, Lowry has been diagnosed with a severe bacterial infection and will miss anywhere from 2-4 weeks. This is a worse blow to fantasy managers than Rubio with Lowry’s averages for the season at a hefty 15.9 points, 7.2 assists, 5.3 rebounds, 1.8 steals, and 1.9 threes per game. To help make these up, and if you’re lucky enough to have grabbed you some ‘Dragic Magic’, Goran Dragic , 2nd round pick in the 2008 draft is the must add. In the two games that he started in place of Lowry, he’s averaged 21.5 points, 8.0 dimes, 3.0 boards, 1.0 steal and 4 threes. More than serviceable. Dragic is available in 65% of leagues.

#7 Kyle Lowry will be out for the rest of the season with a severe bacterial infection. Photo: blog.chron.com

3. Luol Deng-SF-Bulls- Deng will miss his second straight game (wrist) against the Knicks on Monday and it’s unlikely (questionable) that he’ll  play on Wednesday vs the Miami Heat. With Richard Hamilton (shoulder) also out, 3-point specialist Kyle Korver will start and get 30+ minutes per game. He’s started five games so far this season and has averaged 15.0 points, 4.0 boards, and 3.4 threes.

4. Rudy Gay-SF/PF-Grizzlies- After taking an elbow to the head vs the Nuggets on Sunday, Gay suffered what is believed to be a mild concussion which probably affected his game as he shot just 3 0f 13. He will be undergoing further tests on Monday. Montior this situation and pick up Dante Cunningham if the concussion symtoms linger and force Gay out of the lineup for an extended period of time as concussions can do.  Cunningham had 12.0 points, 8 boards, and 3 blocks in over 27 minutes in that Nuggets game. Quincy Pondexter is another player who will garner extra minutes as well.

FYI…Wison Chandler-SG/SF-Nuggets- According to Chandler’s agent, this Friday is the deadline set by Chandler’s agent for Denver to agree to a long term deal. Even with a logjam of players, coach Geaorge Karl has said he would play Chandler for 30+ minutes a game if he’s signed, so pick him up at your own risk. Just be mindful that  this if he’s going to get signed, this would be the week.

With 25% of the season already behind us, here are the two ‘hottest’ teams in the NBA…BOTH on seven game winning streaks!

HOUSTON ROCKETS– With their win last night against the Minnesota Timberwolves 107-92, the Rockets are now on a seven game winning streak. A lot of the credit for this streak has to do with Kevin Martin’s prolific scoring. The seventh-year guard has scored at least 25 points in five of the victories, and 89 points in the last three games alone. He’s also 11-for-28 on 3-pointers in the last three games.

One of the main reasons for the Rockets' streak is #12 Kevin Martin, going up for a dunk. Photo: ambasketball.com

Another huge contributor to the Rocket’s recent sucess is PG Kyle Lowry. Last night he recorded his second career triple-double; 16 points, 10 boards, 10 dimes. In his last four games Lowry, the 1st round pick of the Grizzles in 2006, has averaged 13.3 points, 7.2 rebounds, 7.7 assists, 2.2 steals, and 1.8 threes.

PG Kyle Lowry had a triple-double on Monday night and got a plug. "Stay thirsty my friends!" Photo: bbs.clutchfans.net

The Rockets’ next three games this week, are all at home where they are 7-1 on the season. They’ll play the Bucks, Wizards, and Knicks, so it’s very possible that they will extend their streak even more by the weekend.

MEMPHIS GRIZZLIES– The other team that’s on a seven game winning streak, also in the Western Conference are the Grizzlies. They just squeaked by Golden State last night with a 91-90 win which saw them score 39 fourth quarter points. They’re biggest stud, forward Rudy Gay, has been tearing it up all season but in the last six of seven games, the 1st round pick of the Houston Rockets in 2006 out of UCONN, has scored over 20 points a game. In his last four he’s averaged 20.5 points, 5.2 boards, 2.0 steals, and 1 block.

#22 Grizzlies forward and former Husky Rudy Gay has scored over 20 points in six of his last seven games. Photo: sportswallpapershd.com

Marc Gasol has also been instrumental in the Grizzlies’ winning streak, posting 4 game averages of 18.5 points, 10 boards, 4.0 assists, and 2.2 blocks. For season to date he has the second highest ranking among all centers in the league. He put up his tenth double-double of the season last night vs the Warriors.

The Grizzlies will go on the road and face Portland, the Clippers, and Phoenix over their next three games this week. They are currently tied for first place along with San Antonio and Dallas and they boast the best road record in their division.