Another 3-2 week… That’s four on the season! At least we’re consistent unlike Thursday Night Football which finally broke the mold by giving us what turned out to be a pretty competitive game. Down by 24 points, Andrew Luck and supper stus T.Y. Hilton came roaring back to beat the Texans by six. Let’s hope this weekend’s games are just as exciting.

Steelers +1 1/2 over BROWNS- If making the Steelers the underdog against a pedestrian team like the Browns doesn’t rile the Black and Gold, then nothing will! The stat that we think is even more impressive is that Ben Roethlisberger is 18-1 against the Browns.

VIKINGS +1 1/2 over Lions- These Lions are a different team without the services of WR Calvin Johnson, who, as we went to post, was questionable with a bum ankle. Teddy Bridgewater is expected to start replacing Christian Ponder.

Chargers -7 over RAIDERS- Many are considering this year to be Philip Rivers’ best season of his career and so it makes it even more difficult to pick against the former first-rounder. His Chargers should be 5-0 save for an opening week 18-17 loss. RB Branden Oliver fills in nicely for the perrenial injury plagued Ryan Matthews.

FALCONS -3 over Bears- Do the Falcons play really badly on the road?? (Is J.J. Watt a defensive beast)? It is a different story AT the Georgia Dome, however. Matt Ryan is an unbelievable 38-10 at home and will be looking to avenge his team’s 30-20 loss to the Giants in Week 5.

CARDINALS -3 1/2 over Redskins- Arizona, with one of the best defensive lines in the NFl, will face a Redskins team decimated with injuries and full of  inexperienced replacements. Expect QB Kirk Cousins to spend a good deal of the day either on the turf or scrambling himself into throwing  pick or two.

Well, “Super Bowl Week” as it is referred to in the fantasy football community, comes to an end in most every league this weekend. We have put together what we hope will give your team enough of an edge to help win you the 2013 fantasy championship in your league. Good luck and we’ll look forward to seeing you back here next year! If we have helped you during the season (or even if we haven’t), feel free to share your thoughts with us. We would love to hear from you…

Jordan Todman-RB-Jaguars- 26% Owned- With Maurice Jones-Drew sidelined last Sunday with a hamstring injury, Todman did everything a second string running back can do except score. He had 25 rushes for 109 yards and added 4 receptions for another 44 giving him 153 all-purpose yards on the day. MJD hasn’t practiced all week and even if he suits up this weekend, which is doubtful at the moment, he won’t be 100%. Todman will face a fairly ineffective Titans run defense who has given up the 4th most fantasy points to running backs this season. Todman should be owned in all formats and leagues.

#30 Jordan Todman gets the start at RB this week vs the porous run-defense of the Titans and is a must add. Photo: Phil Sears-USA TODAY Sports.

Dennis Johnson-RB-Texans- 15% Owned- Johnson will get the starting nod this Sunday against the Broncos as Ben Tate has been placed on injured reserve. Denver has been generous to running backs this season as they have yielded the 9th most fantasy points to them. No doubt the Texans will be playing from behind most of the game and Johnson, for those in PPR leagues, could gain more yards through the air than on the ground. A must add in deeper leagues only.

Andre Caldwell-WR-Broncos- 4% Owned- We thought that Jacob Tamme would be lined up in the slot last week with Wes Welker (concussion) unable to play but instead Caldwell was given the assignment and he didn’t disappoint those lucky enough to have him rostered. He caught 6 passes for 59 yards and had two touchdowns. If Welker is sidelined again this week, Caldwell should be a lock to be given the same slot duties against the Texans. Another must add in deeper leagues.

Marvin Jones-WR-Bengals- 38% Owned- On a roll, the second year wideout has 8 receptions for 108 yards and two touchdowns over the last two weeks and should be chomping at the bit to play this weekend against the 30th ranked pass defense in the league; the Minnesota Vikings. Jones, if allowed to continue to play in as many snaps as he has of late, should garner owners something like 50 receiving yards and a touchdown at least in this contest. 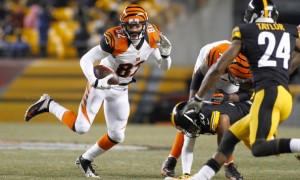 #82 WR Marvin Jones runs after making a catch on Dec. 15, 2013 vs the Steelers at Heinz Field. He has one touchdown reception in each of his last two games. Photo: Zimbio.com

Kirk Cousins-QB-Redskins- 17% Owned- If you are in a 2 quarterback league or have had enough of Matt Ryan at this point, Cousins, a borderline QB1 this week, should be considered in all leagues. In his only two NFL starts he has passed for over 300 yards per game and amassed 5 touchdowns. This week he’ll go up against a Cowboy team that has given up the most fantasy points to opposing quarterbacks this season. The only thing going against Cousins in this game would be how strong Dallas will come out swinging as they need this one desperately.