By now all you team owners are well-entrenched in your league’s playoffs. As the regular NBA season continues to wind down, more & more players have been getting some extra minutes while veterans get some much needed rest. Teams can also see what some players can do with more floor time. This week’s pickups have several of those players. Good luck!

1. Maurice Harkless- SF-Magic- Harkless is one of those receiving very generous minutes and the 1st round pick out of St. John’s in last year’s draft has responded well with the 60 shot attempts he’s taken in just the last 4 games. If you own a team that’s in need of steals, Harkless has 19 thefts in his last five games. He has averaged 8 rebounds over the last four and has recorded double-digit scoring in 16 of his last 18 games. The youngster should make for a decent pickup in all 12+ leagues. Harkless is owned in only 24% of leagues. Savvy managers will be picking Harkless up while the Magic continue to showcase his talents. 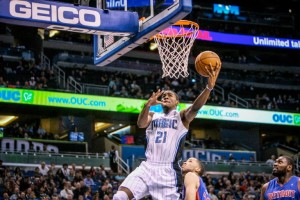 2. Patrick Patterson-PF,C-Kings- The Rockets, who drafted Patterson in the first round of the 2010 draft, gave up on him after only three seasons and traded the 6′ 9″ PF to the Sacramento Kings a little over two weeks ago, Foe those in deeper leagues, Patterson’s 15 points and 6 rebound average over his last four games plus 1-2 treys, could help you down the playoff stretch. Patterson is available in over 70% of most leagues.

3. Jonas Valanciunas-C-Raptors- A shout-out to this 7 footer who was picked as one of our Sleepers to consider before the season began. He too has seen a surge in his minutes over the last six games. The Lithuanian big guy has proven to the Raptors head coach, Dwane Casey, that he has made the right decision with his 12.7 points, 7 rebounds, 30-45 (67%) shooting from the field and 16-19 (84%) from the free throw line. Here is another player that should be owned in all formats especially while he’s getting the extra minutes. Valanciunas is owned in just 22% of leagues.

4. Reggie Evans-PF-Nets- Strictly a one-category player throughout his career, Evans can and will only help your team if you are lacking in rebounds. We are recommending him now because he has been in the midst of his most productive stretch so far this season. Evans has posted double-digit rebounds in 9 of his last 10 games while pulling down 20 or more boards in three of them. He is owned in under 25% of leagues and is a serviceable pickup in deeper leagues. 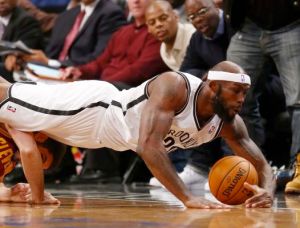 #30 The ‘Beast of the Boards’ Reggie Evans has rung up 20+ rebounds three times in his last 10 games. Photo: GettyImages

5. Jerryd Bayless-PG-SG-Grizzlies- The former 1st rounder, 11th overall in the 2008 draft has accumulated more frequent flier miles than points scored as he has played on 4 teams in his 5 year NBA career. Solely for those in deeper leagues, Bayless can only net you points (he has averaged 16.2 points in his last 5 games), but also treys. He scores in bunches and we think you will be rewarded.  Hardly owned, (under 10%), Bayless would make a formidable streamer as well, as the Grizzlies will play 4 times during the week of 3/25.