NBA 2013: 6 Potential Busts you should avoid drafting (or drafting too early) Part 1

Depending on your league size and settings, there are a host of players you should steer clear of and if you have to draft them because you’re in a deeper league, then do not draft this group too early. There are other players with a great deal of upside to them, so draft wisely if you want your team to stay competitive.

1. Steve Nash-PG-Lakers- Almost seems sacrilegious to list Nash among players to avoid  drafting too early but we don’t see the veteran ex-Suns superstar playing more than 60 games this season. His assists took a major drop last year and there is little reason to believe it will change now given that Kobe will not play this month and has no timetable for his return from a ruptured achilles. Draft a point guard with potential, not one with merely strong name-value. 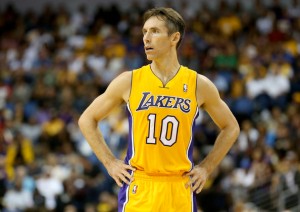 2. Greivis Vasquez-PG-Kings- Sacramento’s backcourt reminds me of a Mike Shanahan’s running backs…’a committee of several’. In Sacramento, although  a great pickup for the Kings, Greivis will undoubtedly end up as part of a committee with Isaiah Thomas (a much better defender) and rookie Ray McCallum all sharing the minutes at point guard. Both Thomas and Vasquez will make for latter round pickups.

3. Joe Johnson-SG-Nets- The Nets went out in the off-season and stock piled a host of talented role players making some of their usual starters forced to share the minutes available. Joe “ISO” Johnson will have Jason Terry and Alan Anderson clamoring for playing time and along with several other newly acquired offensive weapons, Johnson, whose game has already begun to decline, will probably end up being over-drafted.

SG Joe Johnson who suffered through Plantar Fasciitis in last year’s playoffs, will see a significant drop in his minutes with a deep Nets bench on tap for this season. Photo: Getty Images

4. Dwayne Wade-SG-Heat- Too risky to draft too early, and even though Wade will probably go in the first 2 rounds in most leagues, we’re recommending that you wait until at least the third round if possible. His knees have been a major concern over the past several seasons and it’s the main reason why he shied away from taking his trademark jumper in the Finals. He is too much of an injury risk to grab that early and is destined to disappoint.

5. Paul Pierce-SF-Nets- We are not suggesting to avoid drafting Pierce altogether, but be mindful that he’ll share minutes with Andrei Kirilenko. Pierce has already gone on record saying that he is ready to assume the position of a ‘role player’ indicating that his numbers will be nowhere near what they averaged when he was with the Celtics. The Nets are just too deep a team for many of their players to realize their full value from past seasons.

6. Danilo Gallinari-SF-Nuggets- After undergoing knee surgery in the off-season, the former Knick is not expected to return until late January or early February leaving Wilson Chandler as a prime candidate for Sleeper material. Chandler will be someone you should look to grab with Gallo’s season as questionable as it is. We wouldn’t even suggest stashing Gallinari as we don’t know how he will perform when he does return. 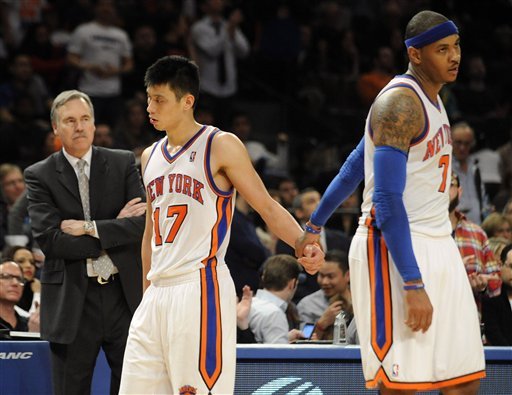 It was more than just the 'body language' that was off in the Knicks President's Day loss to the N.J. Nets. Photo: Bill Koustroun/AP

1. Carmelo Anthony- Melo was totally ineffective on both sides of the ball. He shot 36% from the floor, scored a total of 11 points, and  turned the ball over six times. He never shook off the rust that had accumulated after being sidelined for the last seven games. His shots and passing were awkward and tentative as he clearly was not ready to return to ‘primetime’.

2. Deron Williams-  He had circled this day and this game on his mental calendar. Williams wanted to atone for the humiliation heaped on him in their last meeting when Jeremy Lin dropped 28 on him in a Knicks win. He, as they say, was on a ‘quest’! He made 10 baskets on the night; 8 of which came from 3-point land, a career high. Had he not fouled out in the 4th quarter he might have scored more than the 38 that he already had. And he made sure he rubbed the Knicks’ noses in it as he bumped a team mate after a time out had been called right after making one of his 8 threes- just to mimic the bumping that Lin and Landry Fields often do. 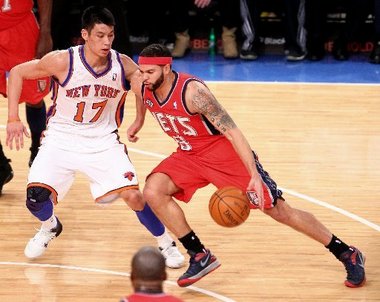 Jeremy Lin did not have an answer on defense to Deron Williams' torrid offense. Photo: Bill Koustroun/AP

3. Iman Shumpert/Bill Walker-Having these two players sidelined with injuries, hurt them significantly on defense. At 6′ 5″, Shumpert (knee) although an offensive liability at times, can be a pest to opposing players when he’s on ‘D’. Same goes for Billy Walker (elbow), and both can, on occasion, shoot the three which would have been helpful to the Knicks on Monday as the Nets dropped 15 threes on them. With  Steve Novak and J.R. Smith going 2-13 from beyond the arc last night, Walker and Shumpert could have made a huge difference.

4. Mike D’Antoni- There were two things that D’Antoni didn”t do in the Knicks loss to the Nets that we find fault with. The most glaring one was not finding an answer to Deron Williams. Why not double him up and force him to pass or at best have the press make him more susceptible to turning the ball over. He could have even tried switching Lin and putting Landry Fields, a much more adept defender than Lin, on Williams. It’s inexcusable for any player to drop 18 points in a quarter on any team let alone on the Knicks who have played pretty good defense most of the season, but that’s what Williams did. Understood that you can’t stop Deron, but at least slow him down. Limit him to 9-10 points in the 3rd quarter and the Knicks might have won the game. (they only lost by 8).

We also didn’t care for the way D’Antoni utilized Carmelo. Here’s a guy that was out with a nasty groin injury and missed seven games. He shoots 36% on the night and turns the ball over six times, as we had mentioned, and yet D’Antoni has him play more minutes than any other player on the team!?! It wasn’t like he was getting any better as the game wore on…

...."maybe I shouldn't have played Melo for 37 minutes in his first game back..." Photo: postingandtoasting.com

The Knicks go on to play the Atlanta Hawks on Wednesday. The Hawks who are already without Al Horford (pectoral surgery) and is not expected back until mid April, will also be without the services of Joe Johnson (knee). Marvin Johnson (personal) who missed yesterday’s game is due back for Wednesday’s contest vs the Knicks. He’ll get plenty of extra time in this one for those of you in fantasy leagues in need of rebounds, threes and points and a fill-in on the last day of games before All Star weekend.

Consider other options before drafting these five players…

1. BEN GORDON-PG/SG-Pistons- The 28 year old Gordon has slowed over the past two seasons averaging 13.8 pts-1.9 reb.-2.7 assts two years ago and 11.2/2.4/2.1/1.2 last year. Not very fantasy friendly. He’ll back up Ronald Stuckey and will see his minutes remain about the same at 25-27 per game. The former 1st round pick of the Chicago Bulls out of UCONN becomes viable only through an injury to Stuckey. Gordon is currently going 132 ADP. At This position, we would suggest picking up Jeff Teague 137 ADP or George Hill 135 ADP, as both have more fantasy upside.

Bull's Guard Ben Gordon has missed a step or two over the past two seasons. Photo: Jonathan Daniel/Getty Images

2. JOE JOHNSON-SG/SF-Hawks- We know you’re all rolling your eyes at this point, but remember, we’re not saying that you shouldn’t draft these players, just don’t take them so early, consider your options, and temper your expectations. That said, Joe Johnson, like Ben Gordon above, has been on the decline for several years. Clearly he is still very much fantasy relevant but consider this: In the last 5 seasons his points have dropped from 25 to 18.2, 3’s almost in half 2.1 to 1.2, FT’s 4.1 to 2.7 and steals 1.1 to 0.7. Johnson is going 49 ADP. Two other options you could consider taking before him are  Ray Allen 52 ADP or even James Harden currently at 70 ADP. 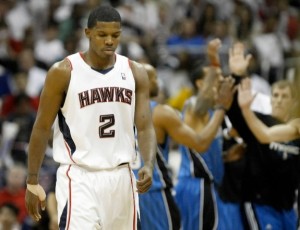 3. DANNY GRANGER-SF/PF-Pacers- Granger’s points have declined over the last three years from 25.8 to 20.5. With the addition of David West, a clear upgrade from Josh McRoberts, and the addition of George Hill, who came over from the Spurs, Granager will be yielding some looks and points. Throw in the anticipated emergence of Paul George, and the Pacer offense is much more spread out among the new adds. Again, Granger should be drafted but be mindful that his numbers will take a hit.

A new supporting cast in Indiana will cut into Granger's numbers this season. Photo: Ron Hoskins/NBAE via Getty Images

4. DAVID WEST-PF-Pacers- West was the leading scorer on the Hornets and had an assist machine in tow with Chris Paul ‘dishing and swishing’ to him on a regular basis. Now he’ll have Darren Collison to rely on which will be a considerable drop-off to say the least. He will, as stated above, have to share his looks with Danny Granger which will in turn cut into his numbers as well. Remember too that West is coming off a torn ACL which forced him to sit for the final 10 games of last season as well as the playoffs. He’s currently going off the boards at ADP 48 which seems a bit early with all the uncertainty  surrounding his health and new team’s dynamic.

West's arrival in Indiana will cut into his numbers as well as Grangers. Photo: news.Cincinnati.com

5. BROOK LOPEZ-C-Nets- As we’re sure all you team managers have heard by now, Center Brook Lopez fractured his foot playing against the Knicks in their pre-season game this week. He’s scheduled for surgery on Friday and could miss 2-3 months. This is a major blow to the Nets as Lopez was their leading scorer at 20.6 points per game. Backup Center Johan Petro will take his place unless the Nets go out and get a more worthy replacement. Unfortunately, Lopez going down has ruined any possible chance of the Nets securing Dwight Howard… Some options you may consider instead of Petro would be Kendrick Perkins, Brendan Heyward, or Brandon Bass with Heyward, Tyson Chandler’s replacement in Dallas, having the greatest uptick.

Nets Center Brook Lopez goes under the knife Friday and will miss the bulk of the season with a right foot stress fracture. Photo: nypost.com