We’re nearing the halfway point of the season so by now managers should have a pretty good idea of what they will need coming down the home stretch and into the playoffs. In Fantasy leagues we’re more than half-way through the regular season’s as there are usually 22 weeks on the schedule. You should start choosing a bit more wisely now and so we’re here to help with this week’s pickups…

1. Brandon Belt-1B/OF-S.F. Giants– This late season call up last September proved one thing was clear; he has power. He hit 9 home runs in just 187 AB which equates to around 27 in a full season. On June 7th Belt began to play everyday and he has not disappointed. He had a modest 11 game hitting streak snapped on Sunday, and he still has the team’s highest on-base percentage- even though surprisingly he continues to bat seventh in the lineup. Over his last 37 AB he is hitting .405 with 4 HR and 12 RBI. He clearly is worth a flier and should be picked up in 12+ leagues. He is owned in just 32% of leagues. 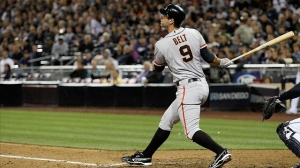 2. Pedro Alvarez- 3B-Pirates– The former second over-all pick in the 2008 draft of the Pittsburgh Pirates, is playing on a team where the bulk of the offense comes from two players; Andrew McClutchen and Pedro Alvarez. As of Sunday they were both tied for the most HR on the team with 13. Over Alvarez’s last 10 games he has scored 10 runs, hit 5 HR, knocked in 11, and has batted .317. Although he’s on pace to hit 28 HR, his only liability is his low batting average. In just under 800 career AB, his average is 5 points higher than his weight; .228. Maybe the surge he’s on now will continue- but just be mindful. For now we recommend Alavarez in deeper and A.L. only leagues. He can be easily had as he’s only owned in 28% of leagues.

3. Michael Fiers-SP/RP-Brewers- This 27 year old who prior to this year had only 2 innings pitched in the majors on his resume, has done an excellent job since getting the starting nod and with Shaun Marcum hitting the disabled list, Fiers will have even more of an opportunity to continue to start. He has started seven games so far this season and has gone 2-2 with a 2.70 ERA to go with a 1.11 WHIP. He also has 14 K’s in his last 15 1/3 innings pitched. However his main strength lies in his 31:5 K:BB ratio. He doesn’t have much velocity on his ball as he barely goes above 90, but his control more than adequate. He should be considered in deeper leagues at this point and in 12+ leagues especially if you’re into streaming and the matchup looks favorable. He is widely available in 95% of leagues.

4. Glen Perkins-RP-Twins-This is a move that should be made by all leagues with managers in needs of saves. Matt Capps, the Twins’ usual closer, has only pitched one inning since June 15th and is more than likely headed to the DL. This should give Perkins an opportunity to keep the role for another 2-3 weeks possibly. He has converted the two save opportunities he’s had and has excellent control as witnessed by his 40 K and 13 BB this season; all coming in relief. Owned in only 10% of leagues at the moment, you can bet that he will be gobbled up at a faster pace over the next several days. Don’t procrastinate, and keep an eye on Capps and monitor his eventual trip to the DL. A ‘Must Add’. 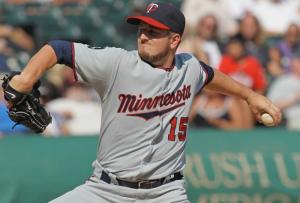 #15 new Twins Closer Glen Perkins becomes a ‘Must Add’ this week for those in need of saves. Photo: Jonathan Daniel/Getty Images

5. Cody Ross-OF-Red Sox- With all the commotion surrounding Kevin Youkilis’ departure from Boston to the White Sox, little know Cody Ross has been slipping through the cracks. Keen managers has taken notice of his performance of late, but for those of you who haven’t, this could be a steal. Even though he’s missed almost a full month with a broken bone in his left foot, Ross had his ninth career multi-homer game on Sunday in a win over the Braves. Since coming off of the DL, he has gone 7 of 22 (.318) with 3 homers and 10 RBI in just 6 games. He is available in 2/3 of most leagues and makes for a great pick up in leagues of 12 or more.

Taking The Mound: This week we have listed four starters and one reliever for you to consider as the pitchers that have been headed for the DL continues to grow each week. Here’s just a short list of recent casualties:

Clayton Richard-SP-Padres- We’re recommending Richard only as a stop-gap or streaming tool especially while he’s on a pretty good streak of late; three quality starts out of four in June. In those three games he’s given up a total of 2 earned runs and went 2-1 with 1 ND. We like him in his next start vs the weak Mariners at home. He’s available in almost every league.

Justin Masterson-SP-Indians- The former 2nd round pick of the Boston Red Sox never lived up to the high expectations the Sox had for him. He was rocked earlier in the season but since has settled down by throwing 3 straight quality starts in June. His last one, a 9 strikeout performance vs the Pirates last Friday was one of his best this season. Over his last 14 innings, Masterson has 15 K’s and an ERA of 0.64. He’s worth a look in deeper and A.L.  only leagues. He’ll face the Reds at home on Wednesday and is owned in around 40% of leagues.

Wei-Yin Chen- SP-Orioles- This 26 year old Taiwanese rookie southpaw has won his last three starts and has, over the course of the season, pitched fairly well against some of the leagues better teams. Angels-1 ER, Yankees-2 ER (twice) and Red Sox-1 ER. He’s 7-2 on the season with a decent 3.36 ERA. He is certainly worth picking up in 12+ leagues. He’ll face the Nationals on Saturday and the Indians next week. Chen is owned only in 25% of leagues. 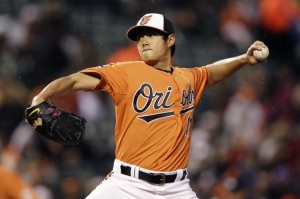 Baltimore SP Wei-Yin Chen with his early 7-2 record could be a candidate for A.L. Rookie of the Year honors. Photo: Patrick Semansky/Associated Press

Jarrod Parker-SP-Athletics- Drafted as an 18 year old in the first round of the 2007 draft by the Diamondbacks, this is Parkers first full season in the majors and it hasn’t been without its bumps and bruises along the way. He has had two tremendous starts in his last three outings. a 3-hitter 8-2 win over the Rockies last Thursday, and a 1-hitter 8 inning 12-1 gem against the Rangers. Sandwiched in between these sterling starts was a 6 earned run, 5 walk implosion against the team that drafted him, Arizona. He only has 2 duds out of his 10 starts this season, and has a serviceable 2.82 ERA. Pitching in a true ‘pitcher’s park’, he is definitely worth a spot in 12+ leagues. He’s available in 70% of leagues.

Tom Wilhelmsen-R/P-Mariners-  Given the rough season Brandon League has had; 0-4, 3.90 ERA, 1.60 WHIP, 20K’s, 15 BB’s, manager Eric Wedge has put his trust in Wilhelmsen who has not disappointed. In the month of June, he has 2 wins, 4 saves, 11K’s, and just 2 BB’s. Best known for his perfect ninth inning vs the combined multi-pitcher no hitter back on June 8th, Wilhelmsen should be a must add in any league that needs saves until or unless Wedge decides to give the closing chores back to League. He is owned in 33% of leagues. 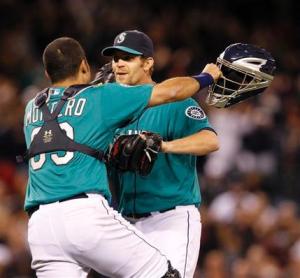 The season is now 1/3 over and we will be headed into the All-Star break before we know it. Here are a few of our waiver wire pickups entering week #10 and as a little bonus, we’ve thrown in some 2-start pitchers for the week so those that are in weekly leagues can have a head start and a head’s up…

Gordon Beckham-2B-White Sox-Surprised that this former 1st round pick in the 2008 draft is still so unowned. While riding a ten-game hitting streak, Beckham has batted .348, hit three home runs and has eight RBI. Although he is still batting just above the ‘Mendoza Line’ at .238, his average has risen 30 points during his streak. He is on course to surpass his career high in HR (14) as he presently is holding at 8 with 2/3 of the season to go. Owned only in around 15% of leagues, he should be owned in 12+ team leagues and deeper. 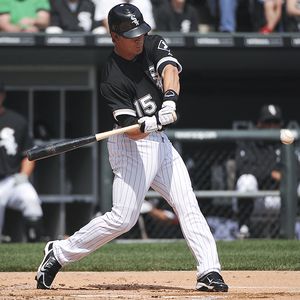 Justin Smoak-1B-Mariners- Another former 1st rounder in the same draft as Gordon Beckham above, is Justin Smoak who has been ‘smoking’ at the plate. He has hit safely in 11 out of his last 14 games good for a .333 clip to go along with 6 home runs and 17 RBI. He won’t hit for average over the course of a full season, but his current numbers projected over the rest of the season, shows Smoak finishing with 20 HR and 75 RBI which, for the Mariners, would make him ‘Ruth-Like’…Highly touted when he first came into the league with the Texas Rangers, Smoak was the 3rd most picked up player over the past four days. Only owned in 25% of leagues, we’re recommending him in deeper or A.L. only leagues.

Felix Doubront-SP/RP-Red Sox- This 24 year old southpaw is our ‘Must-Add’ player of the week! In his first full season with the Red Sox, Doubront has been the most dependable starter on Boston’s staff by far. He has the most strikeouts (66) in 62 1/3 innings pitched and has the lowest ERA (3.75) of any other starter. Over his last six starts, Doubront is 5-1, which rivals any other team’s ace on their staff. He has been prone to giving up the long ball, 5 over the past three games, but 66 K’s to 25 BB indicates to us that he has excellent control. Doubront is owned in 40% of leagues and has been getting grabbed by savvy team owners at high rates since his last win on Saturday. He should be owned in all leagues. 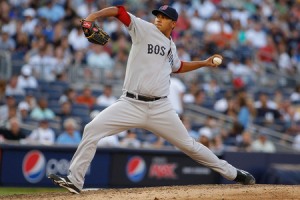 Quintin Berry-OF-Tigers- Since being named the Tiger’s starting center fielder on May 23rd, Berry had played in 11 games and the speedster has taken advantage of the opportunity by hitting safely in all but one of the 11. He’s batting .362, has scored 11 runs and stolen 6 bases. In his last four games he’s an unbelievable 8-18, .444, and has shown no signs of letting up. He has had 3 hits in a game three times in his last 7 games. It’s a small sample to be sure for this rookie who has spent several years in the minors before getting this chance, but we suggest at least taking out a flier on Berry or at best, picking him up in A.L. leagues only for the moment. Owned only in less than 10% of leagues, he’s worth the watch…

Recommended Pitchers with 2 Starts in Week 10: