A wide receiver who finally is having himself another “breakout-like” season and a running back getting a chance while the team’s perennial pro-bowler has been banished, lead the Furnace’s list of waiver wire pickups, our Fearsome Foursome, this week…

Eddie Royal-WR-Chargers- Is Royal having another breakout-like season or will he fade like he did last season as the weeks go on? This is the question you must ask yourself before grabbing the veteran wide receiver. Given Royal’s propensity towards running out of gas, he could perhaps be serviceable against some of San Diego’s opponents who are secondary-challenged such as the Raiders, Jets and Chiefs. Just in the last two weeks Royal had 9 receptions on 13 targets for 147 yards and 4 touchdowns. In deeper leagues of 12+ Royal could help fill a void but beware, he might just break your heart before the season is over.

Jerick McKinnon-RB-Vikings- With stud back Adrian Peterson being held out indefinitely with his off-field issues, opportunity is knocking on the door for this speedy running back. He’ll continue to share touches with Matt Asiata, who lacks the talent and speed of McKinnon. Although tweaking his ankle in week 4 in a win against the Falcons, reports are that it is nothing serious and the rookie will be ready for the matchup vs the Packers in Week 5 who are notorious for giving up yards (4th most in the league) and fantasy points to RBs. McKinnon will make for a  decent Flex play.

Jarius Wright-WR-Vikings- Wright, who played in over half the snaps in Sunday’s win over the Falcons, certainly appeared to be on Teddy Football’s wave length as their chemistry was apparent by virtue of Wright’s 10 targets. He ended the day with 8 receptions for 132 yards. With TE Kyle Rudolph sidelined, expect Wright to see a possible repeat performance again this week against Green Bay. We wouldn’t label Wright more than a WR 3-4, but clearly he could be someone who can fill in for some of your under-performing wideouts this week.

Isaiah Crowell-RB-Browns- Given more reps with Ben Tate sidelined, Crowell has become a goal line vulture hitting paydirt three times in the Browns first three games this season. The 25% owned Crowell has averaged 11 fantasy points in those three games and even with Tate expected to make his return in Week 5, look for Crowell to get somewhere around 8-10 touches and some goal line snaps as well. Cleveland will face the Titans who have given up the 9th most fantasy points to running backs this season.

But don’t take our word for it, here is what Browns coach Mike Pettine had to say about Crowell, “When you have a back, who before the season you weren’t factoring in on being a big part of what you’re doing, and he’s being productive, you find ways to get him out there.”

Injuries were rampant in Week 2 and although some players might not miss all that much time, others are sending up a red flag to their owners to be mindful about handcuffing the next option. Take Reggie Bush for example. So far this season he has had a dislocated thumb, bruised hip, a groin strain and this past Sunday he injured his left knee after colliding with Cardinals safety Tony Jefferson.  Joique Bell was clearly the obvious pickup last week…

As this is going to publishing, all of the players below are owned in  28% of leagues (or less).

1. James Starks-RB-Packers-  In the opening minutes of the game Sunday, Eddie Lacy was hit straight on in a helmet-to-helmet play that  amazingly was not called by the officails. If ever a hit cried out for a penalty, given all the precautions that the NFL has taken lately, this was the one. He left the game and never returned, suffering from a concussion and could be out until after the Packers 4th week bye. Enter James Starks who merely ran for 132 yds. (the first Packer RB  to run for over 100 yards in 45 games!), plus 36 receiving yards.  Watch for reports on Lacy but consider grabbing Starks who is owned in just 11% of leagues. 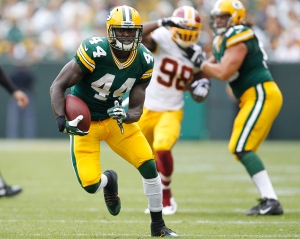 #44 James Starks plows ahead for 7 of his 132 yards vs the Redskins on Sunday. Photo: (Mike Roemer/AP)

2. Eddie Royal-WR-Chargers- Out of literally nowhere, Royal had a resurgence on Sunday catching 7 passes for 90 yards to go along with 3 touchdowns.  He had 2 touchdowns in Week 1 so if you snatched him off of waivers after that performance you have to be pinching yourself by now! With Danario Alexander (knee) out for the year and Malcom Floyd (neck) going to the hospital Sunday, Royal instantly became Phillip Rivers’ favorite receiver. Although this kind of performance will be the exception and not the rule, in deeper and most mixed leagues Royal could prove very serviceable.  Available in 80% of leagues, Royal will surely be one of the most ADDS this week.

3. Charles Clay-TE-Dolphins- Clay had a breakout week vs the Colts in week 2 with 5 receptions for 109 yards and a touchdown. The TD coming on a one-yards rush as Clay often lines up at tight end as well as fullback. Offensive coordinator Mike Sherman said he’d like to get Clay more involved as a ballcarrier which is great news for Clay owners. The upstart Dolphins have begun the season 2-0 for the second time since 2002 and Clay, currently the ninth highest ranked TE in the league, has played a part in that feat . Owned in just 5% of leagues, Clay makes for a decent pickup in most leauges.

4. Kansas City Chiefs-DST- Very quietly, the reborn Chiefs are off to a 2-0 start for the first time, or so it seems, since Calvin Coolidge was president! However from a fantasy standpoint, there are a whole host of reasons why you should consider rostering their Defense and Special Team. Admittedly it’s early but did you know that K.C. has more fantasy points than any other team in the league? Or that their 16 points allowed is second only to Seattle? Now that we have your attention, the Chiefs are also in a 4-way tie in sacks with 9 to go along with their 2 INTs and 2 fumble recoveries. They may not be a play every week depending how they do over the next week or two, but remember the do play Oakland twice. Owned in just 18% of leagues they clearly warrant consideration. 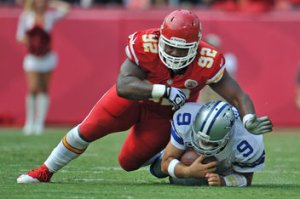 5. Garrett Hartley-K-Saints- Not someone who you should rush to pick up off of waivers right away but definitely take out a flier on the undrafted kicker now in his fifth year with the Saints. Currently Hartley is second in fantasy points to the Cowboys Dan Bailey and leads the league with a modest 6 field goals made. He has already nailed a 48 yarder and is 5-7 in his career from 50 yards & beyond. Hartley is 28% owned.