In most fantasy leagues, settings call for 2 centers, and as such a lot of attention is given to this position. Team managers need to have at least one to two additional centers, or more, on the bench available when needed in their lineups. In this shortened season, centers, just like all position players, have been injured at an alarming rate. 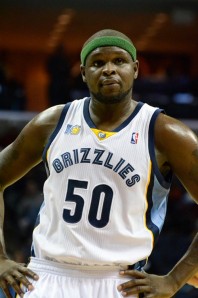 Memphis Grizzlies coach Lionel Hollins has said that Zeke Randolph will not be returning this season. Photo: http://www.memphisflyer.com

Primary centers that were drafted in the earlier rounds such as Zach Randolph, Andrew Bogut, Andrea Bargnani, Brook Lopez, and Al Horford are either injured and out for the season or just injured. Some secondary centers missing currently are Spencer Hawes, Jermaine O’Neal, Mehmet Okur, Greg Oden, and Kwame Brown.

Although points are a bonus when acquiring a center, as is the case with Lopez and Randolph for example, rebounds and blocks are needed to compliment whatever points you can get especially off waivers (1/3 of the way into the season). Here are five moderate to widely available centers and their % owned in Yahoo! leagues. They are listed with averages in points/reb./blks. over the past week (3-4 games):

For those in desperate need of blocks, we’ve highlighted two players  that you should add or at least take a flier on, even though they are not centers:

Rodrigue Beaubois-PG/SG-Dallas- 14 blocks in his last 6 games. Only 35% owned.

6' 2" Mavericks guard Rodrigue Beaubois brings defense to his game as his 14 blocks in just 6 games would indicate.