Need to shore up your pitching rotation? How about one of the league’s hottest relievers? Consider these little owned pitchers that are out there on waivers in most leagues. Some of the starters also have very favorable match ups in their next starts…

Jake Odorizzi-SP-Rays- 9% Owned- If you discount Odorizzi’s second game of the season where he got shelled by the Kansas City Royals who collected 7 earned runs on 10 hits against the 24 year old, then his inflated ERA and WHIP won’t look as ominous. He has turned things around by only allowing 4 earned runs over his last four games while striking out 31! Odorizzi will face the Red Sox for the second time in less than a week in his next start after his 8-5 win on May 25th. He only gave up one earned run in the 1st inning on his way to that win. With little run support (the Rays have scored 3 or fewer runs in 7 of his 10 starts), it’s just a matter of time before his wins begin to mount up. Hardly owned, we can highly recommend the youngster in A.L. only and deeper leagues for the time being.

Collin McHugh-SP-Astros- 18% Owned- Now entering his fourth year in the majors, McHugh has been a veritable pinball as he is now with his fourth team in as many years. McHugh has just 22 career starts thus far so it’s hard to get a read on what his potential is. What’s caught our eye is his 50 strikeouts and only 12 walks in 45 innings pitched this season. McHugh has definitely had a handle on his control. He will take his 2.80 ERA and miniscule 0.98 WHIP and face the Orioles in his next start on Sunday, June 1st. He is worth taking out a flier on and should already have been picked up in deeper leagues., McHugh also makes for a very serviceable streamer. 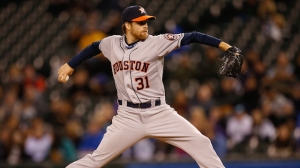 The Furnace thinks that #31 Collin McHugh, although lacking all the attention that teammate Dallas Keuchel is garnering, still deserves to be considered in most leagues. Otto Greule Jr/Getty Images.

Jorge De La Rosa-SP-Rockies- 31%Owned- Any pitcher who has had around 10 starts and is gunning for his seventh when next he takes the hill, should be considered in all mixed leagues. Especially when that next start is against the lowly Arizona Diamonbacks. La Rosa has won his last six out of seven starts and only has given up 8 earned runs during that stretch. Not many pitchers out there as hot as La Rosa. Since the beginning of the 2013 season until now, he has gone a remarkable 22-9! La Rosa is a must add in all mixed leagues.

Dellin Betances-RP-Yankees- 27% Owned- There isn’t much to say about this 26 year old, 8th round pick of the Yankees in the 2006 draft except to show you a few of his numbers: 3-0 1.48 ERA 51 strikeouts 9 walks. He hasn’t been picked up in more leagues because he isn’t a closer, but we know K’s , a low ERA, and WHIP are important settings in most leagues and when you throw in all the injuries to N.Y’s starting pitching thus far this season, it will enable Betances to pick up a fair share of wins before all is said and done There really isn’t any reason not to grab him.

Yankees reliever Dellin Betances has been’ lights out’ and given the bullpen a huge lift while several starters are still on the DL. Photo: ESPN