Our picks for the 2014 AFC & NFC Championship games

Well, we’re just 2 1/2 weeks away from the 2014 Super Bowl and we are ready with our picks for the championship games this weekend. It’s clear that the remaining four teams truly deserve to be playing for the right to go to E. Rutherford next month.

Patriots over the BRONCOS- Up until the last week or so, we would have said overwhelmingly that Denver would take this game should these two play each other for the AFC championship, but two things have changed our thinking; First, the Pats have switched their M/O somewhat and have been rushing more than we’re used to seeing…and they have done so very effectively. The success they’ve had (Blount 166 rushing yards- 4 TDs and Ridley 52 yards and 2 TDs last week vs the Colts), just opens things up for an already strong aerial attack.

Second, with the best CB on the Bronocos, Chris Harris, tearing his ACL and Von Miller out, Brady should have an easier time in the Patriots passing game. In fact we expect more passing than rushing in this game unlike what we saw last week now that the Broncos defense is hurting. The intangible in this game, as always, is Bill Belichick who is a cool 19-8 in the post-season to go along with three Super Bowl Championships! That’s one heck of a resume.

SEAHAWKS vs 49ers- Although a lot of pundits are pining for S.F., we are giving the edge to Seattle. Keys to this game will include running back Marshawn Lynch, both field goal kickers , the refs, turnovers, and the crowd. Lynch has 170 yards rushing in the teams’ two regular season meetings this year and will need to do even better than that in order to keep Kaepernick & the Niners off the field. In Lynch’s last five games against S.F., the running back has averaged 98.2 yards so that task is certainly attainable. 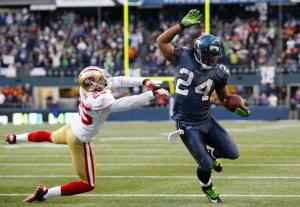 #24 Marshawn Lynch, as always, will be an intregal part of Seattle’s game plan this Sunday. Photo: Seahawks.com

We mentioned field goal kickers because the last two times these teams faced one another, the final scores, low by NFL standards, only tallied 36 combined points (in their December game) and 32 (in September). Seattle’s defense has allowed just 16 touchdown passes all season; second best in the league, while posting an NFL-high 28 interceptions. Kaepernick needs to bring his ‘A’ game if he and his teammates expect to pull off the upset. How has opposing quarterbacks fared against Seattle’s ‘D’? They have a combined league-low rating of 63.4%.

The Seahawks are one of the leagues most penalized teams which could come back to haunt them on Sunday, unless of course, the 12th man on the field, the crowd, forces more than a few false starts for Kaepernick & crew. These two teams do not like each other and you can expect more than a few fights to break out during the game which will put more pressure on the refs whose decisions could swing the momentum and possibly the game one way or the other. However, when the dust settles, it will be the ‘Hawks who will move on to E. Rutherford.

We had a monstrous week going 4-1 faltering  only to the imploding Atlanta Falcons on the last play of the game. The four wins now bring our season record to a respectable 15-10 entering week #6. We’ll need our two underdog selections (Browns & Saints) to come through in order to repeat week 5’s success. Here are this week’s Best Bets…

BROWNS over the Lions- To say that the Browns have been on a proverbial roll would be an understatemnt as they have won their last three games. In other words they are undefeated since Trent Richardson was traded following the Browns 14-6 loss to the Ravens back in week #2. Cleveland is coming into this week’s contest with a full 10 days rest vs a Lions team that will not only have Calvin Johnson be a game-time decision but also one that gives up just under 400 yards of offense a game.  That’s a lot of real estate! Sticking with the Brownies…

JETS over the Steelers- The winless Steelers come into Met Life Stadium on Sunday to face the AFC offensive player of the week in Geno Smith as well as the team with the league’s second best defense. No easy task for Pittsburgh with their decimated offensive line that has allowed Big Ben Roethlisberger to be sacked 15 times in four games. Pulling out that last second 30-28 win over the Falcons last week, these 3-2 Jets look like they’re for real.

#7 Rookie Geno Smith unleashes one of his 3 touchdown passes (no INTs) vs the Falcons last week. Photo:Kevin C. Cox/Getty Images

TEXANS over the Rams- After two wins over the Chargers and the Titans in weeks one and two, the Texans, and in particular QB Matt Schaub, has regressed as they lost their next three, while getting pummled by the 49ers last week 34-3.  If Schaub can stop throwing his now famous Pick Sixes, and the Texans defense can step it up for this Sunday’s home game, they should be able to beat a Rams team that is not very good.

49ERS over the Cardinals- The Niners have come-on over their last two games, scoring a combined 69 points while only giving up 14. QB Colin Kaepernick has settled down following two shaky starts against the Seahawks and the Colts, both losses. We’re expecting a huge game from veteran TE Vernon Davis, RB Frank Gore, and the Niners D who will contain Carson Palmer and make him struggle to remain upright. ‘Blowout alert’ in this one…

Saints over the PATRIOTS- Never like to pick against the Pats, (we did it earlier this season and took the loss…) but the Saints are too good a team to just lay down and be manhandled up in Foxboro. As this post is going to publishing, TE Rob Gronkowski still had not been cleared for Sunday’s game and even if he plays it might be in a limited role. Meantime the Saints have beaten their last three opponents by a total of 53 points (24-21-and 8) and have a more cohesive unit than the Patriots especially on defense. When New England played against two good defensive teams this season in the Jets and Bengals, they were only able to put up 13 and 6 points respectively; not your typical Patriots offensive output. The Saints in a close one..

Another 3-2 week for our staff here last week bringing our season record to a pedestrian 11-9. Maybe now that the season is a quarter over it will get easier…we’ll see. Three games that we’ve included this week that look the most intriguing are the 49ers-Texans, Saints-Bears and the Packers-Lions. Here’s our take. and  all of our five best bets…

Broncos over the COWBOYS- We’re not sold on the ‘Boys early dominance (2-0) at home this season. Besides playing in one of the weakest and most inept divisions this year, their “Win one-Lose one” style of competition will not fly against the more talent-laden Broncos who have won 15 regular season games in a row now. The Cowboys, and not many other teams, do not have that potent a secondary to keep Peyton from connecting often with his vast array of offensive weapons. 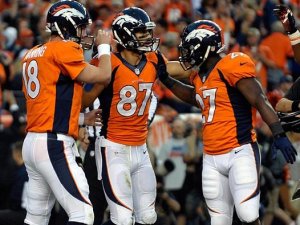 49ERS over the Texans- The Texans lost their comfortable lead and ultimately the game to the Seahawks last week at home. They will now be travelling to Candlestick which is not an easy place to help turn your game around and Matt Schaub does need to turn his game around! Two major injuries for Houston loom large in DE J. J. Watt (groin) and LB Brian Cushing (concussion). The home crowd should also help Colin Kaepernick try and get back into his comfort zone.

Saints over the BEARS- Great matchup of two teams that are currently sitting on top of their respective divisions, in a season which is now a quarter over. We are still very impressed with the Saints defense which is ranked 6th in the league at the moment. Coming off their Monday night win, the Saints duo of Sean Payton and Drew Brees seem to be working on all cylinders. Too early in the season for the weather in the “windy city” to factor into this game as well.

PACKERS over the Lions- The Pack return to the welcome combines of Lambeau Field for a key divisional game with the offensive minded Lions after blowing their last game in Cincinnati vs the Bengals. In what should be a high-scoring affair, Aaron Rodgers enters this game undefeated against Detroit (8-0) for his career. He has posted 18 touchdowns against just 4 interceptions in those eight games. Wouldn’t be surprised is the final score is 38-24. 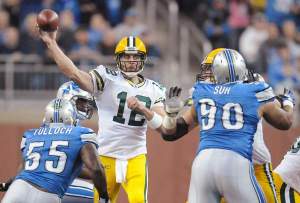 #12 Aaron Rodgers looks to make it 9-0 for his career vs the rival Lions on Sunday Photo: Corey Wilson/Press-Gazette

FALCONS over the Jets- Atlanta, who was ‘desperate’ for a win last week against the Patriots need this week’s victory even moreso before the Saints completely run away with the division. The Jets’ defense is ranked 2nd in the league which should help to keep this one close for most of the contest but if they’re on the field too long that edge would be eliminated. The absence of Santonio Holmes and Stephen Hill won’t help the Jets’ cause either.