We zeroed in on only four pickups this week and with only one player owned in over 20% of leagues you should check out this group very closely. If you have your doubts then take out a flier on these guys but I can’t believe that they will remain available for that long, especially in more shallow leagues. Here are this week’s ‘Fab Four’…

Lance Stephenson-SG-Pacers-  Following a ‘Pep Talk’ from coach Frank Vogel after two poorly played games, Stephenson has turned things around- big time! Over his last three games he’s averaged 15.7 points a game and is ranked 32nd among all players for the week in Yahoo! Leagues. This past Friday night vs the Heat in a 13 point win, the local Brooklyn 2nd round pick of the Pacers in 2010 had 15 points, 2 three-pointers, 3 rebounds, 4 assists and a steal. He’s getting plenty of floor time as his 36.3 minutes per game over the last three would indicate. Watch him to see if this upward trend continues or, if you have the room, stash him on your bench. He’s owned in just 6% of leagues. In shallow leagues don’t sleep on him. He’ll play four times this week…

#1 Guard Lance Stephenson goes up for a layup vs the Miami Heat last Friday scoring 2 of his 15 points. Photo: sportsillustrated.com

Marreese Speights-PF/C-Cavs- After coming over to the Cavs from the Grizzlies almost two weeks ago, Speights has seen his playing time double from 14 MPG in Memphis to almost 26 in Cleveland and his numbers have been fantasy worthy. In the five games he’s played with the Cavs, the 6′ 10″ former 1st rounder has averaged 15.4 points, 6.8 rebounds, 0.8 blocks, and has outstanding shooting percentages; 53.4% from the field and 87.5% from the Free Throw line. He has never played these many MPG so if he continues to get the time he is worth the look. Owned only in 16% of leagues, keep your eye on him or take a gamble and grab him particularly if you’re in a league with 2-centers.

Taj Gibson- PF-Bulls- Injuries have afforded the big guy to see extra minutes and has he ever become fantasy relevant in all leagues and formats! Carlos Boozer (hamstring) and Joakim Noah (plantar fascitis) will remain out for a while which will give the savvy team owner a chance at gaining an edge in their leagues. Ride him as long as he continues to start. His performance on Saturday night should be enough to make you snatch him off waivers ASAP. He had 19 points and 19 rebounds in the Bulls’ win over the Hawks. He also had three blocks. This is how his numbers average out over the past seven days: 37.45 MPG, 14 PPG, 11 RBG, and 2.5 BPG. And this is why he needs to be a Must Add in 12+ leagues and deeper. Widely available in around 80% of leagues, he’s there for the taking. 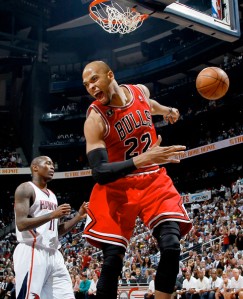 #22 Taj Gibson went off vs the Hawks on Sat. night pouring in 19 while grabbing 19 boards. A Must Add this week! Photo: sports.espn.com

Eric Bledsoe-PG/SG-Clippers- While the Super Bowl was the main focus of attention last Sunday, the Clippers and Celtics still played, and in case you missed it Eric Bledsoe flirted with a triple-double registering 23 points, 10 assists and 7 boards to go along with 1 block and 2 steals in 38 minutes. In the 7 games that Bledsoe has started since Chris Paul has been out after re-aggravating his right knee cap, the former 1st round pick out of Kentucky has averaged 13 points, 5.7 assists, 5 rebounds, 2.1 steals, and 1.3 blocks. There is no time table set for when CP3 will return but there is also no reason for Bledsoe to remain on waivers while he remains out. Remarkably, he is available in over 60% of leagues!

VIDEO OF THE WEEK

Posted by fantasyfurnace on January 5, 2012
Posted in: VIDEO OF THE WEEK. Tagged: Basketball, Chris Paul, Sports, Video, Video of the week, Videos. Leave a comment

Check out the next Chris Paul! You will not believe this kid’s moves and the way he can dish out those assists. And he’s only in the 6th grade!!!!