Don’t be fooled or sucked in to drafting players with those ‘sexier’ or familiar names; the perennial names that you just ‘assume’ will do well because at one time they might have. We are not saying not to draft  any of this group, but before spending a draft pick “too early”, check out why we think they could let you down…

Steven Jackson-RB-Falcons- Hard to believe that SJax is only turning 31! Probably because he will be entering his eleventh year in the NFL and those legs have logged over 10,000 rushing yards (10,678 to be exact). We have never been true supporters of Jacksons even in his prime in St. Louis. Since 2004 he has only tallied more than double-digit touchdowns just once in a season.. Over the last five years Jackson has averaged only 5 TDs per year. He no longer is a featured back and thus will garner just a few touchdowns near the goal line while amassing around 500-700 rushing yards. There are better options. 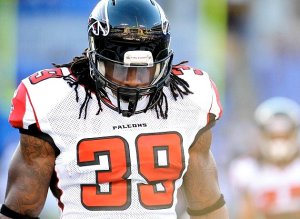 #39 RB Steven Jackson’s better days are behind him in Atlanta where Jaquizz Rodgers garners the bulk of the carries. Mitch Stringer-USA TODAY Sports:

Eric Decker-WR-Jets- This probable bust is pretty much a n0-brainer as there are not many who feel that Decker will score 24 more touchdowns over the next two years with either Geno Smith or Michael Vick under center. The Jets’ offense will begin and end with their running back trio of Chris Ivory, Bilal Powell, and Chris Johnson, and when they do opt to throw the ball, Decker will see his share of double teams as the rest of the club’s receivers are not going to scare any opponent this season.

Lamar Miller-RB-Dolphins- While many of our Dolphin fans won’t appreciate this bust selection, savvy fantasy owners will. If you recall, Miller underachieved mightily for the bulk of last season before turning it on late. So what did Miami do? They went out and plucked Knowshon Moreno away from the Broncos leaving Miller’s role such that he will no longer be very fantasy relevant.

Chris Johnson-RB-Jets- Unfortunately, for fantasy owners anyway, Johnson will just get caught up in the log jam at the running back position in New York this season with three, count ’em, three very talented backs all fighting for fantasy points. C.J. will not get many opportunities at the goal line, so his value will drop drastically this season. A very late round pick perhaps, for those in deeper leagues.

Victor Cruz-WR-Giants- We love and have missed all that “Salsa” action in the end zone from 2012, but suffered along with many other fantasy owners as Cruz’s production crashed and burned last year in Eli Manning’s worst season in memory. Cruz’ touchdowns should go up as we don’t expect Eli to suffer through quite that bad a season as last year, but those expecting Cruz to be a solid WR1 need to temper their expectations and not rush to grab the speedster too quickly otherwise they may realize some disappointment.

Vincent Jackson-WR-Buccaneers- At the outset here is a warning: Stay away from any receiver who might have to depend on soon to be 35 year old quarterback Josh McCown in a very tenable QB situation in Tampa.. If you still want to go after Jackson then consider that in the Buccaneer’s last 10 games, Jackson caught just three touchdowns. Just a sexy name with a disappointing resume. Pass.

In Tampa’s last 10 games Jackson had more than six catches only once. The Furnace recommends that you ‘pass’ on this WR. Photo: Getty Images

The Jets should be “flying high” this season!!

Give the Jets’ General Manager John Idzik Jr. his props. He has had a fairly productive off-season thus far with many key acquisitions already in tow that promise to take the beleagured team out of their mediocrity…finally!

With a trio of new players already added to the team and the draft yet to come, it appears as though the Jets are flying high into the 2014-2015 season.

Given the free agents available to the Jets management this offseason, the moves that were made might not have been the greatest of all time but they were the smartest ones possible. Was there really a much better wide receiver available out there besides Eric Decker? What that pickup does is afford Geno Smith, assuming that he will be the starting QB, another passing option with a seasoned veteran (Decker was a third round pick of the Denver Broncos in the 2010 draft).

If you’re thinking that the only reason Decker caught 24 touchdown passes over the past two seasons was because he had Peyton Manning as the QB then you are partially correct. Decker is also a talented receiver.  Geno Smith, on the other hand, is no Peyton Manning, but remember that Decker did catch 8 TD passes in 2011 and they were all from Tim Tebow!

And speaking of a seasoned veteran, could the Jets have picked up anyone better at running back than ex-Titan Chris Johnson? Two years-$8 million and they lost no one! Six years of 1,000 rushing yards or more and a back who can catch a pass out of the backfield. He had four passing touchdowns as recent as last season to go along with six of the rushing kind. Has C.J. lost a step? Yep! Absolutely! But a Chris Johnson at 75% is better than any other RB that was out there at 100%.

#28 Ex-Titans RB Chris Johnson,who can bust one for major yardage at any time, will bring his talents to the N.Y. Jets this season. Kyle Terada-USA TODAY Sports

Chris Johnson, (AKA) CJ2K, will compliment a backfield that includes Chris Ivory and Bilal Powell. The group will help Geno Smith because, as we have seen, he tends to panic when all of his options have disappeared. However now he now has a back who can run a 4.24 and catch a screen or handle a dump off when called upon. If the Jets don’t overwork him, CJ will pay dividends as he will be out to prove all the doubting Thomases out there that he still can bring it.

The Jets also went out and grabbed themselves a backup or potential starting quarterback; Michael Vick. What we like about this acquisition is that Vick, as most know, is similar in the way he plays to Smith and as such, will be able to better mentor the youngster. The one blaring negative however, is that Geno Smith is prone to turning the ball over and that’s Michael Vick’s biggest liability…

What takes place for Idzik next could be his biggest challenge to date in readying his team for the upcoming season. There are two holes left to fill on the club; the first is at the cornerback position and the second, talented players who can put pressure on the quarterback. Idzik is fortunate in that this could be one of the deepest drafts in recent memory and the Jets will have an added edge with their 12 picks to better themselves- at those two positions in particular.

Disgruntled Jets fans are growing weary with all of the promises made too often that are never kept. Don’t look for headcoach Rex Ryan to predict that the team will win the Super Bowl this year but you better believe that unless the Jets make some noise and get to the post season, Ryan will  spend the 2015-2016 season watching his former team on TV along with the rest of us…

G.M. John Idzik will give headcoah Rex Ryan all the tools he needs to be successful this season. If Rex can’t get the job done it will be his last. Photo: AP