From 3% to 34% owned, there should be someone for every team owner in this weeks’ waiver wire pickups. If you’re tentative, then at least add some of these players to your ‘watch’ list…

Chris Colabella- 1B,OF-Twins- 29% Owned- Entering week #2, Colabello was the 27th ranked player overall in Yahoo! Fantasy Sports, Currently he is tied for third in RBIs with 11 and has scored 5 runs, has 1 homerun, and is batting a hefty  .370. Worth a look in most formats.

Yangervis Solarte-3B,SS-Yankees- 19% Owned- Narrowly making the team ahead of Eduardo Nunez following Spring Training, the infielder with the hard-to-pronounce name, has been on a tear. Batting .458 (11-24), the youngster is the first player to have recorded six doubles in his 1st seven career games since 1900.

#26 Rookie Yangervis Solarte takes a rip vs the Astros last week. One of our hot pickups this week! Photo: Charles Wenzelberg

Avisail McGehee-1B,3B- Marlins- 27% Owned- McGahee is our third entry this week with dual positions. In 2013, McGahee played in Japan and now that he’s back in the major leagues, he has been very productive notwithstanding the small sample so far. He has amassed 10 RBIs in just 5 games, which is more runs batted in than the Braves, Padres, or the Cubs!

Aaron Harang-SP-Braves- 7% Owned- Most starting pitchers have only had two starts at this point in the season so if you’re unsure, add Harang to your watch list, along with his 0.71 ERA and 0.71 WHIP. In his two games over 12 2/3 innings, Harang has given up just 4 hits and struck out 12. A must add in 12+ leagues or more.

Scott Feldman-SP-Astros- 22% Owned- Two starts-Two wins for the ex-Rangers pitcher who signed a nice 4 yr. $32 million contarct with the ‘Stros in the off-season, and given that the entire Astros payroll sits at $45 million, Feldman was their key acquisition. He has never been a high strikeout pitcher (132 K’s last season), but he can be fantasy relevant in deeper leagues as his early 0.66 ERA and 0.66 WHIP has shown.

Jonathan Broxton-RP-Reds- 34% Owned- Just coming off the DL today, the ex-Dodger who had surgery last August, will take over the closing duties for Aroldis Chapman who is not scheduled to return until the middle to end of May. Worth a pickup in all formats. 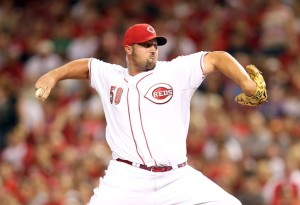 #50 reliever and now Reds closer Jonathan Broxton takes over the role at least for the next 6-8 weeks. Source: Andy Lyons/Getty Images North America

Adam Ottavino-RP-Rockies- 3% Owned- Just a hunch with this reliever based on his 3 K’s per inning average so far this season; (9 in 3 1/3 innings). With his 0.00 ERA and 0.60 WHIP we strongly suggest you take out a flier on Ottavino. You could do worse…

Five Pitchers To Help You Win Your League:

R.A. DICKEY-SP-METS- The 36 year old knuckle baller has been ‘Verlanderesque’,

giving up just 3 earned runs in his last three games, all of which he’s won. Dickey has had nine quality starts in a row dating back to July 25th. With his next start scheduled against the offensively challenged Nationals, Dickey, owned in just 20% of Yahoo! leagues, is a must streamer.

WADE MILEY-SP-DIAMONDBACKS- Miley, for those of you scratching your heads, is a rookie who’s only pitched in four major league games. The 24 year old lefty has done an admirable job thus far. Discounting his debut vs. the Braves, where he had a case of the jitters, the next 3 games he pitched were gems. He gave up 2 earned runs or less in each of them and won all three. He goes against the Pods on Saturday, at home.

ZACH BRITTON-SP-ORIOLES- Even though Britton has had to face the Yankees twice in his last four games, the 23 year old- 3rd round pick of the Orioles fared pretty well, striking out 17 in 23 innings. He also won the last 3 out of 4 games- his lone loss coming vs the Bronx Bombers. His next start is against the Rays who Britton beat 3-2 last Friday. Available in 83% of Yahoo! leagues, he is ‘streamer ready’.

AARON HARANG-SP-PADRES- Sporting a 13-5 record, we’re not sure why is is only

owned in 39% of Yahoo! leagues. Harang, in his last 4 games, has given up just 2 earned runs or less and has struck out 24 in 26 innings pitched. His next start will be on Monday in San Francisco vs the Giants who Harang just beat 3-1 yesterday, giving up 1 run in 7 innings on just 4 hits. Grab him if you still can.

(1.39) are a bit too hefty for a closer, we think if you’re looking for some cheap saves down the stretch, then he’s your man. In his last 6 appearances, in a total of 7 innings, Francisco has given up a total of just 2 earned runs while he has collected 3 saves. His last blown save was back on July 1st vs the Phillies. He is currently owned in 43% of Yahoo! leagues.