Now that we have heard most of the ‘Pomp and Circumstance’ surrounding this title game from every reporter and player on the planet, we decided it was high time to announce our pick for the Big Game.

We will try not to go on about information you have probably already heard numerous times, all with different spins. Mainly we  have heard that Seattle has the best defense in the league and usually the better defensive team will beat a good offensive team most of the time. Right? Not so fast…

The Broncos defense in the last four games, the most important ones of the season to date, has been pretty outstanding and needs to be highlighted. In a capsulated form, here is what the Broncos defense has done; In the first 14 games of the season Denver allowed an average of 105.4 rushing yards and 266.1 passing yards per game. In the last four those numbers have been greatly reduced to 70 yards rushing and 198.5 passing. If all you give up is 70 rushing yards a game then the team’s offense you’re facing is not going to be on the field that often.

Nor will they score as many points. Consider this; After Denver gave up an average of 26.6 points per game during those first 14 games, the defense only allowed 15 points over the last four. 15 points! How many teams in the NFL won by only scoring 15 points all game this season? Or any season?

Secondly, consider that the Broncos have kept the ball for 35 minutes in this year’s playoffs! That’s after they finished the regular season 10th in the league at 30:35. (The Seahawks, for those curiosity seekers out there, finished 17th at 29.57)

Lastly, in case anyone reading this has spent the last four+ months on Pluto, this is Peyton Manning’s year! Period! I mean how many more records and accolades does he have to garner this season to have what some are already saying is the best one, statistically, that any quarterback has ever had! Not taking anything away from second year phenom Russell Wilson as he has already won 29 games in his first two years in the league, but if Peyton Manning is to be given the credit that his distinguished career has brought him, then you would think that with his talent and those five top tier receivers at his disposal, he should better Wilson on Sunday. I mean Richard Sherman, arguably one of the best at what he does in the league, cannot cover all five… 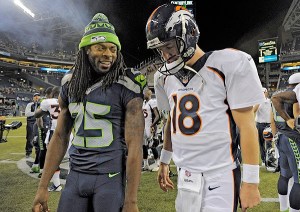 #25 Seahawk Richard Sherman and his “Legion of boom” will do their best to keep #18 Peyton Manning and his top receivers out of the endzone on Sunday, February 2, 2014 Photo: John Leyba/The Denver Post/Getty Images