On a cold, bleak, frigid January night in New York City, history was made! With former Knick greats such as  Allan Houston, Patrick Ewing, and Larry Johnson gracing the refurbished Mecca known as Madison Square Garden, Carmelo Anthony put on a shooting clinic that will forever be considered ‘one for the ages’!

But it wasn’t only Melo’s unbelievable performance that impressed, it was the way it became contagious for a team that was having a horrid year through the first half of the season and had just finished losing their third home game in a row to the team with the 3rd worst record in the NBA, the 76ers. “I’m tired of losing”, is what the now seven time All-Star said at halftime. Carmelo didn’t have one assist in this historic game, at least not statistically, but emotionally he single-handedly lifted the spirits (and the game) of the other Knick players to a level not seen all that often this season. 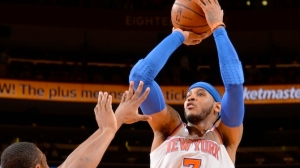 Carmelo Anthony goes up for a jumper vs the Bobcats in a historic night at Madison Square Garden, January 24, 2014. Photo:, Nathaniel S. Butler/NBAE/Getty Images

The crowd was the most electric that the Garden had witnessed in quite some time as Melo set an all-time record for most points in a game by a Knick, and the most at the current Madison Square Garden. It was also the most points (125) scored by the Knicks this season.

It was the kind of night that made all the Knick fans, the players and even the media, cease all conversations regarding the fate of coach Mike Woodson, the bickering and complaining during post-game interviews by Tyson Chandler, and even the idiotic antics of J.R. Smith not so long ago and instead was replaced with cheering, standing ovations, and chanting of “Meh-low”, Meh-low”, “Meh-low” with a couple of “MVP! MVP! MVP’s! thrown in just for good measure.

It was sheer joy (and madness) watching someone who was so much in a zone as Melo was tonight. You just didn’t want it to end. The one thing you DID want to see was Carmelo breaking the record even though by the fourth quarter he clearly was winded and was traversing the floor of the Garden with rubbery legs. It brought back some memories of that night some five years ago when Kobe Bryant put on a similar performance setting, which was then, the all-time Garden record for points scored at 61. And there was another game way back on Christmas Day in 1984 when Bernard King set the Knick record at 60 (in a losing effort 120-114 to the then N.J. Nets)) which stood until tonight, almost thirty years later. 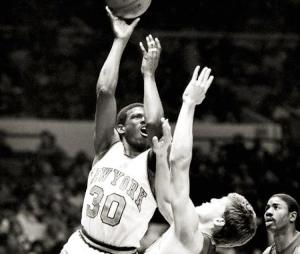 What is left to be determined however, is the impact that this herculean display by Melo will have going forward for a team fighting to stay alive in the playoff hunt. It doesn’t matter that as currently comprised, this team will not advance very far in the post-season should they get there, because in sports stranger things have happened. Still, until and unless Melo gets some help, it will be more of the same for some time to come..

Time will tell whether or not on this one  bleak, frigid, January night when history was made, if it was the game that helped to catapult the Knickerbockers through the remaining 39 games. For those who were at the game witnessing the shattering of a record that stood for almost three decades, it was one they will not soon forget. And in this arena, which is not on Madison Avenue, nor is it square, nor even in a garden, one Carmelo Anthony poured in 62 points, electrifying a crowd, a fan base, and hopefully, even more importantly, his teammates…

Carmelo Anthon acknowledging the crowd after scoring his record setting 62nd point with 7:29 left in the fourth quarter vs the Bobcats, Jan. 24, 2014 AP Photo/Bill Kostroun