In Fantasy Football Playoffs it’s officially ‘crunch time’ and for most leagues many will not move on to the next round unless they put together a decent week. So here then are this week’s pickups, including a couple of possible replacements for Gronk owners. Good luck to all of you who are still alive…

Toby Gerhart-RB-Vikings-10%Owned- Under the assumption that Gerhart’s hamstring has healed enough to allow him to play, he should be the top add this week. It looks more and more like Adrian Peterson will be sidelined with a nasty foot injury making Gerhart next in line. If he can’t go FB/RB Matt Asiata would start.

Chris Ogbonnaya-RB-Browns- 22% Owned- Here too, you will have to wait and check on the status of Willis McGaHee who sustained a concussion in last week’s game. Ogbonnaya would be his replacement should McGaHee be held out as a precautionary measure. Grab whoever is starting (McGaHee is owned in just 14% of Yahoo! Leagues) as they go up against a Bears team that gives up the 2nd most fantasy points to RBs.

Cordarrelle Patterson-WR-Vikings- 27% Owned- Patterson, strictly a pickup in deeper leagues of 12 or more, presents a triple-threat to his opponents as he HAS scored in three different ways this season; 1 rushing TD, 2 receiving, and 2 via the kickoff return route. The Eagles, who the Vikes will face this week, have given up the most fantasy points to WRs this season. 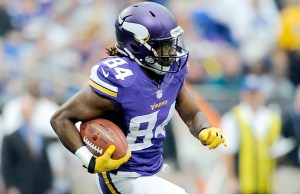 #84 Cordarrelle Patterson, the 29th overall pick in the 2013 draft, is the only rookie in Vikings history to score a TD three different ways in one season. Photo: Hannah Foslien/Getty Images

Jacob Tamme-TE-Broncos- 6% Owned- After WR Wes Welker suffered a concussion last week, Tamme moved over to the slot position vacated by Welker. Sunday’s contest against the Chargers should be a high-scoring affair and so we would expect a more productive day for Tamme who had 4 receptions for 47 yards in limited action last week. He  could help those who lost Gronk for the season to garner some of those missing fantasy points.

Dennis Pitta-TE-Ravens- 14% Owned- Pitta whose return has Joe Flacco drooling with anticipation, can be another decent replacement for TE Rob Gronkowski. Over the past two seasons, Flacco has completed three quarters of his red zone passes to the big TE which makes him more than serviceable. 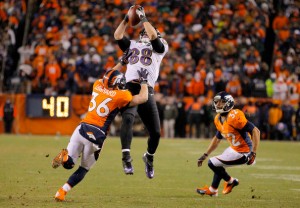