Why does Ndamukong Suh always have a “Fine” time on Thanksgiving?

After two Thanksgiving Holidays in a row, one would think that Detroit Lions defensive tackle Ndamukong Suh would have either learned his lesson or is simply out for the additional publicity that Thanksgiving Day NFL games brings to him and the sport.

However, learning his lesson is not what Suh was going for when again, for the third consecutive Thanksgiving, the demonstrative Suh did it again! He made a throat-slash gesture towards Buccaneers’ running back Bobby Rainey following a three-yard loss in Detroit’s win over Tampa Bay; a gesture that the NFL banned almost 25 years ago. It wasn’t the $7875 that Suh was fined that is troublesome to most on-lookers, but instead the fact that he pulled similar bafoon-like actions twice before…in this season alone! After a turnover in week one, and after an illegal low-block on Minnesota Vikings center John Sullivan, the league hit the big guy with a ‘big’ fine of $100,000. In Cleveland in Week 6, he was fined another $31,500 for roughing passer Brandon Weeden. 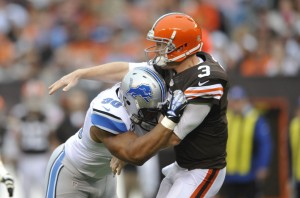 This was the hit by Suh on Browns QB Brandon Weeden that cost him another $31,500 in fines. Photo: David Richard

Getting back to to Suh’s Thanksgiving Day indiscretions, how about last year when the NFL’s “Dirtiest Player” (according to the Sporting News) decided to kick Houston Texans QB Matt Schaub in the groin and thus ended up donating $30,000 more to the NFL. Then of course there was Suh’s most infamous or famous “fine” back in 2011 written about right here on the Furnace. He pushed Green Bay Packers guard Evan Dietrich-Smith’s head into the turf and then thought he would stomp on his arm just for good measure-ON Thanksgiving Day 2011. 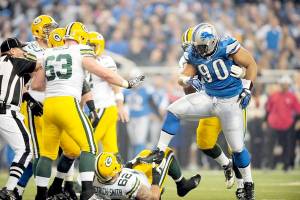 The “Bill Laimbeer of the turf” seems to bring added attention to himself on a day when ‘most’ of us are thinking of ways to be thankful for someone or something in our lives. The most curious thing about Suh’s actions is that they are coming from an extremely talented player in this league who shouldn’t have a need for his extra-curricula activities on the field. Perhaps it’s time for the NFL to take further action on Suh as he is clearly a ‘repeat offender’ who is not scared off by fines. Perhaps if Roger Goodell gives him a warning now, then maybe next Thanksgiving we could all enjoy a ‘cleaner’ game and one in which Suh can have a truly ‘fine’ time without having to forego any $$$ and one in which no player runs the risk of permanent injury…

8 comments on “Why does Ndamukong Suh always have a “Fine” time on Thanksgiving?”