Can you recall a season when there were so many injuries? And those of the season-ending variety no less! The only good news that comes out of these players going down are the opportunities that are available to fantasy owners on the waiver wire. Here are some of those players, none of which is owned in more than 23% of leagues as of Tuesday, Octobber 22, 2013.

1. Mike James-RB-Buccaneers- 11% Owned- Doug Martin, Tampa Bay’s prolific running back, has been sidelined indefinitely with a torn labrum and thus has opened the door for the Buccaneer’s 6th round rookie out of Miami, Mike James. He is also a serviceable receiver  which bodes well for current quarterback Mike Glenn. Although the 3rd down carries will continue to belong to Brian Leonard another sneaky pickup in deeper leagues, James will be the featured back for the foreseeable future.  A must add in most leagues and formats. 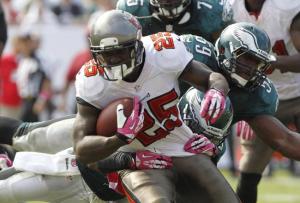 #25 RB Mike James will take over the featured back duties for Tampa Bay with Doug Martin out indefinitely. Photo: Kim Klement-USA TODAY Sports

2. Darrius Heyward-Bey-WR-Colts- 22% Owned- Another major injury this past week was to standout wide receiver Reggie Wayne (knee). Reports say that not only is this season ending, but it could possibly be career ending as well. Heyward-Bey will make for an excellent WR2 in his place. In the Colts’ stunning win over the Broncos on Sunday night, DHB had 4 catches for 44 yards and one touchdown. He also added one carry good for 30 more yards. DHB’s seven targets just emphasizes that he is in line for a much larger role going forward.

3. Jeremy Kerley-WR-Jets- 9% Owned- Kerley is forming a close bond with rookie quarterback Geno Smith as Sunday’s game against the Patriots bears out. He led the team with 10 targets and posted 97 receiving yards and a touchdown. Only one of his receptions didn’t go for a first down! Kerley, with more faith and confidence from Geno Smith, will see more opportunities and hopefully be less inconsistent going forward. He will make a serviceable WR3 this week. 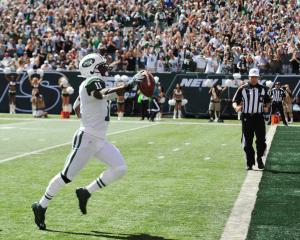 4. Saints-DST-23% Owned- The ninth ranked defense in the league goes up against a rookie quarterback, Thaddeus Lewis, and the Buffalo Bills this week. The Saints are a team that’s angry and hungry for a win in the hopes of erasing the memories of the debacle against the Patriots last Sunday night in that ugly 30-27 loss in the waning moments of that game. The Saints will be at home at the noisy confines of the Mercedes-Benz Superdome. In leagues of 12 or more, there probably isn’t a better team on the wire to select for Week 8.

5. Joseph Fauria-TE-Lions- 18% Owned- We have touted Fauria before, but not many took advantage of his availability last week and so we think another shout-out for Fauria is in order. Oddly enough, he was targeted more times in last week’s game than he has been all season but he did not see the endzone. This week the Lions take on a Cowboy team that has given up the 3rd most fantasy points to Tight Ends this season. With Tony Scheffler remaining out (concussion), the undrafted rookie should  have a 1-2 touchdown day. ForMartellus Bennett owners and those leary about whether or not Jimmy Graham will be on the field this week, Fauria makes an adequate pickup.