Hopefully you grabbed Terrelle Pryor and Robert Woods last week, two of our waiver wire pickups. Although Woods didn’t see paydirt, he was targeted 13 times and with Stevie Johnson down Woods should see an uptick in fantasy value. Pryor had another 2 touchdown passes (no INTs) and beat the Chargers. Here are our pickups for week 6, none of which are owned by more than 10% in most leagues as of  Monday, Oct. 7, 2013.

1. Marcel Reece-RB-Raiders- 7% owned-  Once Rashad Jennings (hamstring) got injured, Reece saw action in the second half of Sunday night’s late game. In a limited role, Reece had 7 rushes for 32 yards and 3 receptions for 25 more. With Jennings still doubful for this week’s game and Darren McFadden (hamstring) likely out until week No. 8, Reece will have plenty of opportunity as the featured to strut his stuff although he won’t have it easy vs the rival Chiefs on Sunday.

2. Jerricho Cotchery-WR-Steelers-4% owned- Cotchery had a breakout game in a losing effort against the Vikings across the pond in his last game as he posted 103 receiving yards and a touchdown. Coming off a bye week the well rested Steelers will take on Cotchery’s former teammates, the Jets, this week. He is targeted an average of 6.5 times a game and more impressive is his 16.5 YPR. Cotchery is on pace for 1,000 receiving yards and 8 TDs and makes for a serviceable WR3 in all mixed leagues.

3. Nick Foles-QB-Eagles-3% owned- With Michael Vick going down during the Giants game on Sunday with a hamstring strain, Foles came in and did an excellent job going 16/25 for 197 yards and two touchdowns. He ended the game with a stunning 114.9 quarterback rating. Fantasy-wise, Foles had the 13th most fantasy points among all QBs last week and finished with a respectable 16 points. For those with their QBs on a bye, note that Foles had more points last week than Aaron Rodgers, Mathew Stafford, and Joe Flacco; not bad company… 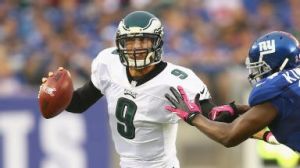 #9 QB Nick Foles filled in admirably for Michael Vick and collected 16 fantasy points in a limited role vs the Giants on Sunday Oct. 6, 2013. Photo: ESPN

4. Austin Pettis-WR-Rams-10% owned- Off to a nice start this season, this third year receiver has already equaled the same amount of touchdowns he posted all of last season (4). Sunday, albeit against a meager defensive team in Jacksonville, Pettis had 4 receptions for 49 yards and two touchdowns. He certainly will not put up those kind of numbers every week, but could make for a decent WR3/WR4 going forward. We expect he’ll put up less significant numbers next Sunday vs Houston but is worth a flier.

5. Ryan Succop-K-Chiefs- 8% owned- Hard to believe that a 5-0 team has a kicker that is barely owned. And good kicker at that! For the season Succop is tied for 8th in the league in fantasy points with 48, just 7 behind second place Garrett Hartley of the Saints. (Prater, in first is way in front with 65 fantasy points) Succop has  proven that he can nail one from long distance as well as he already has a 51 yarder in the bank. In week 5 Succop had more fantasy points than 78% owned Dan Bailey and 80% owned Phil Dawson. Someone well worth considering.