The arrival of the Memorial Day weekend marks the quarter pole in the long baseball season; a time to make some key roster changes in preparation for the next quarter season. Here are five waiver wire pickups for you to consider, all of whom are owned in no more than 25% of most leagues at posting time…

1. Jason Castro-C-Astros- As of May 27th, this former 1st round, 10th overall pick of the Astros in the 2008 draft has mysteriously gone un-noticed in most leagues. He currently is the 11th ranked catcher in Yahoo! Leagues which places him in the top 1/3 of leagues at that position. Castro has logged 6 home runs in 43 games this season-the same amount of homers he hit in 87 games last year. In deeper mixed leagues Castro can be a serviceable backstop and should be owned in more than 13% of leagues.

2. Nick Franklin-SS-Mariners- Another former 1st round pick, Franklin, who turned 22 this past Spring, just got his contract purchased by Seattle from Triple-A Tacoma. In 39 games with Tacoma, the youngster was batting .324 with four homers and seven stolen bases. He also can play 2B which will make him even more appealing for owners. As Franklin will get to start regularly for the anemic Mariners, we recommend him for all mixed leagues & formats. Owned in only 9% of leagues, this talented infielder is there for the taking. 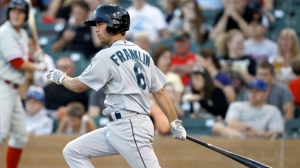 3. Jerome Williams-SP,RP-Angels- One of the most shining lights in the last place Angels pitching staff, has been this former reliever who has excelled since being afforded a starting gig for Seattle. In his last five starts, Williams has gone 3-1 with a no-decision. All of his starts have been quality ones except for his loss to Baltimore on May 5th. With the Astros and Cubs on tap in his next two starts, now would be the time to grab Williams off of waivers where he is available in 75% of leagues.

4. Yan Gomes- C,1B,3B-Indians- If you’re in a league where you can alter your lineups daily, then at least until Gomes gets the opportunity to play everyday, the little owned (19%) multi-positional player is someone to consider adding to your flier list. He has been on a tear in May having hit safely in 9 of the 11 games he started while tallying 3 home runs and nine RBIs. Manager Terry Francona will probably give Gomes more playing time in the near future, so watch him for now, especially in deeper roto leagues.

5. Trevor Rosenthal-RP-Cardinals- The right-handed reliever who will turn 23 this Wednesday, has been a ‘Hold’ specialist having compiled 17 of them in 44 major league appearances over the past two seasons; the only two of his short career. Rosenthal, who has a fastball that reaches triple-digits, could be, and should be, the Card’s future closer, especially with the injury to Jason Motte. Rosenthal’s control is his best asset as he has only walked 6 batters all season while striking out 37. If you can stash him on your roster or, if ‘Holds’ is one of the settings in your league, then we urge you to do so now while he’s owned in just 20% of leagues. 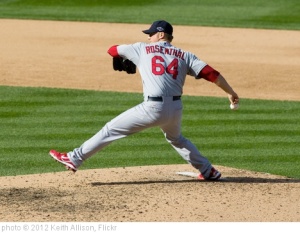 RP Trevor Rosenthal, it can be argued, should be the closer for the Cardinals with his fastball topping off at 100 mph.