We have received several requests for little owned starting pitchers and outfielders from some of our many emails and are obliging this week with two SPs and 3 OFs. Three of our five waiver wire pickups are of the seasoned veteran kind so you will recognize their names. If you should have any specific needs for your roster, please feel free to contact us at fantasyfurnace@yahoo.com Here are this week’s pickups…

1. Dayan Viciedo-OF-White Sox- Although Viciedo isn’t exactly a household name, he’s a candidate in deeper formats and A.L. only leagues this week. The 24 year old was given the everyday left field job last year, his first full season in the major leagues, and he showed why he deserved it by playing keen defense and blasting 25 home runs. The undrafted outfielder needs to cut down on his strikeouts which kept his batting average at a mid tier .255 last season. Viciedo is currently hitting .303 going 11-for-30 (.366) in the month of May.

2. Raul Ibanez-OF-Mariners- We know that you’re probably asking yourself,”why tout a player that will be turning 41 next month?” Well, like Viciedo above, Ibanez is also a fringe fantasy player who is tailor-made for A.L. only and deeper leagues. Consider that discounting last season’s one-year bench role with the Yankees, Ibanez has hit 20 or more home runs in 6 out of his previous 7 seasons and crushed 30+ HRs in two of them, so we know he still can hit for power. Barely owned, the LF has just finished a veritable All-Star-like week going 8-for-22 with 5 HRs and 11 RBIs. Ride him while he’s hot !

3. Bronson Arroyo-SP-Reds- The veteran right-hander has been one durable pitcher going 8 of his last 9 seasons with 30 or more starts. He is as steady as they come and makes an ideal pickup in mixed leagues, while in more shallow ones he can be quite a serviceable streaming candidate. Arroyo is coming of back-to- back wins over the Brewers and Phillies highlighted by a 0.00 ERA and 0.91 WHIP over 14 1/3 innings pitched. He faces the anemic Cubbies next week which should yield him his third win in as many games. Arroyo is owned in just 22% of leagues. 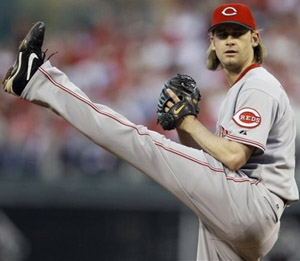 #61 Bronson Arroyo with the highest leg kick in all of baseball is coming on strong & worthy of a pickup in most leagues. Photo: associated press

4. David Phelps-SP,RP-Yankees- Now in just his second big league season, Phelps is getting noticed more and more by some savvy owners as the reliever turned starter has been nothing short of ace-like over his last three starts going 19 1/3 innings and allowing just 4 earned runs (2.06 ERA). For the season, Phelps’ K/BB ratio is 46/ 18 and with the Yankees fifth starter facing the Rays and Mets over his next two games, we highly recommend Phelps as a ‘Must Add’ in mixed leagues and in all formats. Currently he is widely available in over 90% of leagues, but won’t be for long. 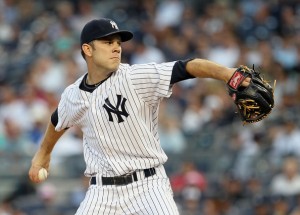 #41 SP,RP David Phelps has been almost unstoppable giving up just 4 earned runs in his last 19 1/3 innings. A ‘Must Add’ Photo: Courtesy of Getty Images

5. David DeJesus-OF-Cubs- Now in his 11th year in the major leagues, 8 with Kansas City, DeJesus is off to a productive start this season and if you believe in pro-rating numbers, the veteran is on track for 100 runs scored (he has 24) 20 home runs (he has 5) and 84 RBIs ( he has 16). Will he achieve these numbers? Probably not but he does stand a chance of coming close now that he is batting in the hitter friendly confines of Wrigley Field. DeJesus has a career batting average of .281 and is currently right around that mark (.288). Basically he is a low risk high reward Center fielder who, only owned by 10% of you owners, is becoming more & more attractive in most mixed leagues.