NBA Coach of the Year: Our two finalists are…

As we have reached the end of the NBA season, this much we know…MVP honors will probably be going to LeBron James with Carmelo Anthony a close second. Sixth Man of the Year Award will be between Jamaal Crawford and our pick-J.R. Smith. The top Rookie of the Year leader is Damian Lillard with Anthony Davis right behind. And a front-runner for Most Improved Player should have Greivis Vasquez on that list.

But what about the Coach of the Year? There are many deserving ones out there to be sure. The list includes Erik Spoelstra, Scott Brooks ,Gregg Popovich, and there’s even been a few fans calling for Mark Jackson. All worthy candidates to be sure. However not one of them made our short list which is comprised of two coaches, that to us anyway, should be the clear-cut favorites to garner this year’s prestigious award.

The first is George Karl. You have to give props to a coach who has led his team to the most wins (56) in the history of the franchise as well as the most home wins in a season, currently at 37. Denver’s home record of 37-3 rivals that of the Heat, Spurs, and Thunder so why not give it to a coach who doesn’t have one player that averages 20 points a game? 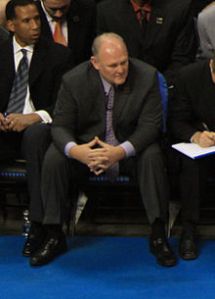 Nuggets coach George Karl is also dealing with the loss of Danilo Gallinari who blew out his ACL on April 5, 2012. Photo: wikopedia

Karl’s naysayers will tell you that his resume in the post-season since joining the Nuggets is underwhelming at best, losing in the first round seven times while making it to- but losing in- the Conference Finals in 2008-’09. This is quite true, however Coach of the Year honors go to a coaches body of work during the regular season, not after it.

We realize that Karl’s illnesses (prostate, throat, and neck cancer) should not enter into the equation for the voters, but on a personal note, one cannot even imagine how he was able to deal with and overcome these dreaded diseases and still stay focused on his team when he returned to the court. (His son Colby out of Boise State University, played in the NBA & other leagues, and he too is a thyroid cancer survivor).

Our second choice for Coach of the Year is Mike Woodson. Hard to imagine why anyone wouldn’t put his name in the running for the award. He has had the inauspicious job of coaching the oldest team in the league and one who had suffered through countless injuries including last year’s Defensive Player of the Year Tyson Chandler. Others include Rasheed Wallace, Kurt Thomas, Marcus Camby, Kenyon Martin, and of course Amare Stoudemire. 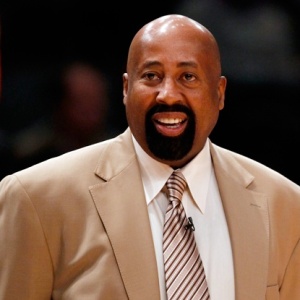 He had the unenviable task of juggling his lineups almost on a nightly basis. In one game two weeks ago, with Chris Copeland playing the five, Woodson had the smallest starting Knicks lineup on the floor since 1940! On April 7, Mike Woodson improved to 68-32 as Knicks head coach, the best 100 game mark in franchise history. And here are more of some the accomplishments under Woodson’s reign:

Either coach is deserving of the award this season, but we’re leaning towards Mike Woodson and not just because we are more than slightly partial to the Knickerbocker franchise, but also because we feel that Woodson had to work harder than Karl to achieve the kind of historic season that he did and with an aging club at that!

Kudos to them both!

5 comments on “NBA Coach of the Year: Our two finalists are…”