The season just began and the injury bug has spread throughout the league. The smarter, more experienced owners have already come up with contingency plans. It isn’t too late to tap the resources of the waiver wire while other owneres are still napping.

In the case of Jose Reyes (ankle) who will probably not be returning until the All-Star break, and who will be to hard to replace with someone of equal talent, the following short stops have been ‘added’ just in Yahoo! leagues:

*We like Marwin Gonzalez who is available in 90% of leagues as well as Jhonny Peralta who is also widely available (75% of leagues). Stay away from Pete Kozma on the Cardinals unless you are in very deep roto leagues and are in desperate need of a SS as he does not have much power and doesn’t steal any bases.

Chris Carter-1B,OF-Astros- The A’s gave up on Carter in the off season after spending three years as a bench player. What we like about the 26 year old is his home run power. Last season he averaged one round-tripper for every 13.6 at bats (16 HRs in 218 ABs). His downside is his batting average. Even though he is currently hitting .289 he will not be able to sustain such a high % over the long haul. Carter also has dual position eligibility which could come in handy in deeper and A.L. only leagues. 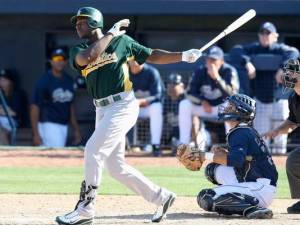 #22 Chris Carter, who came over to the Astros from the A’s for Jed Lowrie, has a lot of pop to his bat but hasn’t hit for average. Photo: Christian Petersen, Getty Images

Travis Hafner-UTIL-Yankees- Best known while playing 10 seasons with the Indians, Haf is filling in for all the bats (and power) that are missing from The Yankees lineup with Teixeira, Granderson, Jeter, and A-Rod all injured. The 35 year old is just two seasons removed from hitting 29 homers in just 118 games. If healthy, Hafner can still bring it however his UTIL status always presents a challenge in some leagues. He has a career .278 batting average and is off to a great start having crushed 3 HRs in just 33 ABs.

Nate Schierholtz-OF-Cubs- For the time being, we are recommending Schieholtz to N.L. league owners only as he is platooning with Scott Hairston in right field. Even though he is seeing slightly more ABs than Hairston, we won’t tout him as someone to grab in all leagues just yet.  If (and when) Schierholtz is given the everyday starting job, he can provide you with 15 HR/15SB potential, but for now, even with his .363 BA, 2 homers, and 2 stolen bases to start this season, we would suggest taking out a flier on him and waiting especially for those in mixed leagues. 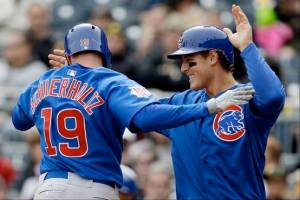 #19 Nate Schierholtz celebrates with teammate Anthony Rizzo after hitting a 2-run HR. He has 2 homers on the year to go along with 2 SB & a .363 BA. Photo: Associated Press

Santiago Casilla-RP-Giants- For those of you in deeper leagues and in need of saves even if they are sporatic, keep an eye on Casilla while he fills in occasionally for full time closer Sergio Romo. Manager Bruce Bochy has intimated that he won’t play Romo more than a few days consecutively and plans to rest him more since blowing Friday’s game vs the Cubs. You could realize as many as 3-4 saves a month with Casilla, which could help those starving for saves no matter where they come from.