Last week we gave you our hitters to avoid drafting and others to ‘draft with caution’. Now it’s the pitchers turn. We have a mix of both relief and starting pitchers alike. If you’re inclined to wait until a week or two before the season begins to draft, then feel free to bookmark these segments for future reference. Here are your pitchers who you might consider passing over at draft time…

Jonathan Broxton-RP-Reds- His strikeout rate (6.98 per 9 IP) is nearly half of what it was at his peak and although he did save 23 games after being named the closer in Kansas City last year, Aroldis Chapman. last year’s Reds closer, is no guarantee to stay in the starting rotation.  Should he falter in that role, he would assume the closing role once again, leaving Broxton, the former Dodger, in just a relief role and thus not fantasy relevant. He is still worth drafting in deeper formats, but proceed with caution.

Derek Holland-SP-Rangers- At the outset, Holland should be drafted but there are enough red flags surrounding him for us to suggest that you might select someone else at draft time. The Rangers placed Holland on the DL with ‘shoulder fatigue’ last June after a rough start to the season; (5.00 ERA). He did a bit better in the 2nd half (4.40 ERA) but gave up way too many long balls (1.6 HRs/9 IP). Another red flag is his 5.55 ERA at hitter-friendly Arlington. He went only 12-7 last season and with his high ERA he deserves our ‘caution flag’ as his fantasy production is limited.

Shaun Marcum-SP-Mets- Now with the third team in his four-year MLB career, Marcum, at best, is an average starting pitcher. There was little change when he went from the Blue Jays (13-8) to the Brewers (13-7) and last year his WHIP, ERA, and opponents BA all went up while his K’s went down. His elbow issues last year kept his record at a modest 7-4. Now with the offensively challenged Mets, he’ll need to pitch much better due to the lack of run support. On the other hand, he leaves Miller Park where his 2-year ERA was a robust 4.74 which should drop at CitiField, his new home, so he’s another SP that you can draft in deeper leagues but temper your expectations. 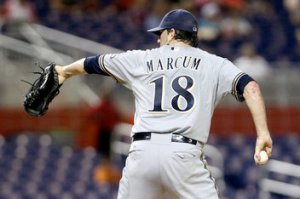 SP Shaun Marcum, now with the Mets, has to improve on last year’s 7-4 record as well as his elbow issues. Marc Serota / Getty Images

Sergio Santos-RP-Blue Jays- Santos is someone to stash on your bench, if you have the room, and then wait and see if he recovers well enough from shoulder surgery to regain his closer status. Thing is, when he went on the DL after making only 6 appearances last year, Casey Janssen did such an admirable job replacing him that the two of them might be competing for the closer role in Spring Training. You can draft him but you do not know at this point in time, whether or not he can fully recover from the surgery and/or whether he’ll end up closing at all.

Brian Wilson-RP-Free Agent- Unsigned as of this writing, Wilson is another one who is coming off of major surgery. In his case the dreaded Tommy John surgery. Wilson had already begun to regress prior to his arm problems, a sign that there was a a definitive loss in control and velocity. His ERA in 2010 was 1.81 and it ballooned to 3.11 in 2011 while his WHIP went from 1.18 to an inflated 1.47! The Giants,Wilson’s former team, found his replacement in Sergio Romo late last season. Wilson, who is currently still without a job, will need some time to regain his form and that might preclude him from closing, at least in the near term.