Fantasy Basketball: Pickups worth watching after the break…

With only a short-week schedule and the All-Star break, we came up with a list of players that those of you in deeper formats should check out and continue to watch in the coming days. Those ‘serious’ owners in deeper leagues have much more maintenance for your team(s) than those in more shallow ones. While we can’t promise that any of the players below will turn out to be ‘Diamonds in the Rough’ , there remains the possibility that they might fill some holes and even turn out to be assets in the long run. Here they are…

Alan Anderson-SG/SF-Raptors- We had mentioned this un-drafted player in a previous column and although he had slowed down considerably after our ‘mention’ due to a lack of minutes, he has become more relevant now over the last three Raptors games by averaging 15.7 points over that span including a 26 point breakout game vs the Knicks last Wednesday. Still being considered in trade talks (the deadline is Feb. 21st), he is someone to consider if you’re in need of points and treys ONLY. He is only owned in a handful of leagues so we suggest watching him this coming week to see if minutes and points continue. 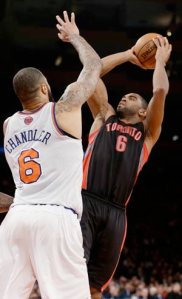 #6 Alan Anderson goes up for a shot over Tyson Chandler. He scored 26 points vs the Knicks last week. Photo: pba-online.net

Patrick Patterson-PF/C-Rockets- Since January 23rd, This former 1st round pick in the 2010 draft out of Kentucky has scored in double-digits in 11 of 12 games. While only recording two double-doubles in those dozen games, he has averaged around 5 rebounds per contest. He plays between 27-29 minutes per night and, what we like for those with shooting percentages in your league’s settings is his 51.9% F.G. shooting. For a big guy like Patterson, even his 75.5% F.T. shooting isn’t that bad. He is even worth a flier in 12+ leagues because of his consistent playing time & stats and is only owned in about 1/3 of leagues.

Kyle Singler-SG/SF-Pistons-  We saw him play when he was with Duke and weren’t surprised when he was taken in just the second round in 2011. Since recently being moved from shooting guard to the starting 3, his numbers have gotten better. Scoring in double-digits in 7 of his last 8 games, he shot 48.2% from the field (40-83). Again, in deeper formats, if you need a guy that can give you around 12 points, 5 rebounds, and a trey a night, then Singler could be taken as he is only owned in 13% of leagues. 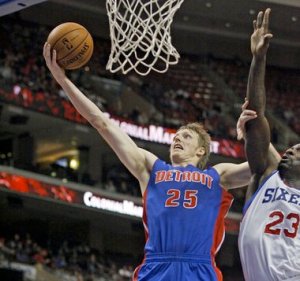 #25 Out of Duke, Kyle Singler was just moved to small forward and is doing well enough to consider picking up. AP File Photo

Jermaine O’Neal-C-Suns- You’re probably wondering how this 34 year old- 18 year NBA veteran can still be viable in fantasy leagues. Well, we thought the same thing until he returned from a chest injury he had over a week ago. Since then, he has averaged 10.4 points per game, 6.9 rebounds, and 2 blocks in just 23 minutes of work a night. He also had his best game since November 23rd last Tuesday night in Phoenix when, during the Suns’ loss to the Lakers, O’Neal scored 12 points (4-9 FG, 4-4 FT), had 13 boards, and 5 blocks, giving him 9 blocks in his last 3 games. The Suns play four times this week and if O’Neal has a similar game vs the Trail Blazers on Tuesday night, we would suggest grabbing him. Barely owned (4%) that should not be a problem.

P.J. Tucker-SG/SF/PF-Suns- Hardly a household name, (he’s only played in 68 career games), Tucker is the one from this group that we have to admit is a stretch, at best. The only noticeable difference in his game since Phoenix made him a starter back on New Year’s Eve, is that there has been a bit of a tweak in the amount of shots he’s taken over the past two games (20) which is what he has been averaging over a 3-game period. In the last two he’s averaged 10.5 points, 5 boards, a trey, a steal, and a block. A small sample to be sure but like O’Neal, he has four games this week. We also like his three-position eligibility. Check out his numbers on Tuesday night and either wait or consider him in very deep leagues.