10 Facts, Stats & Records from Super Bowl XLVIII that you might not be aware of… 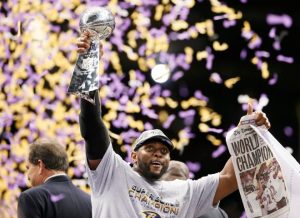 For those of you that watched the ‘big’ game last night, and even for the ones who didn’t, here are some of the more interesting facts,  stats, and records broken that you might not have heard about during the telecast. For example, did you know that…

1. The 4 hour, 14 minute game was the longest Super Bowl in history.

2. The Super Bowl was only the second league championship game in NFL history (including the Pre-Super Bowl era) in which each team scored 30 or more points. The first was when the Steelers defeated the Cowboys 35-31 in SB XIII.

3. The Ravens are the 12th team to win multiple Super Bowls.

4. Colin Kaepernick ran for a 15 yard touchdown in the fourth quarter, the longest TD run by a quarterback in Super Bowl history.

5. Jacoby Jones became the first player to ever score a touchdown on a kickoff return and on a reception in a Super Bowl.

#12 Jacoby Jones runs in for the TD at the opening of the 3rd quarter on a 108 yard kickoff return. Photo: REUTERS/Gary Hershorn (UNITED STATES

7. Colin Kaepernick’s interception in the second quarter when he overthrew the self-proclaimed “Greatest wide receiver who ever played the game”, Randy Moss, was the first thrown by a Niners quarterback in a Super Bowl covering 169 passes. Joe Montana and Steve Young had thrown 17 TD passes and no interceptions in the previous five games.

8. The Ravens fake field goal in the second quarter was the first one to be attempted in Super Bowl history.

9. Ed Reed made the 9th interception of his post-season career, tying an NFL record with Charlie Waters, Bill Simpson, and Ronnie Lott.

10. With the victory in Super Bowl XLVIII, Joe Flacco now has nine postseason victories as a starting quarterback. That ties Tom Brady for the most by any quarterback in his first five seasons and ties him for ninth among all quarterbacks.

17 comments on “10 Facts, Stats & Records from Super Bowl XLVIII that you might not be aware of…”