Our pick is the PATRIOTS over the Ravens. It just might, however, be a lot closer than most, including the pundits think, given these two teams recent history against each other.

The Ravens beat the Patriots 33-14 in the 2009 wild-card round. The Patriots then won two games (2010 regular season and last year’s AFC title game) by the identical score of 23-20, and in September the Ravens won 31-30 in Baltimore. Don’t see any evidence in those recent matchups the Patriots will put a double-digit hurting on the Ravens.

Tom Brady hasn’t had his best performances against the Ravens in his career. His QB rating is some 20 points LOWER vs Baltimore than his career average. The Ravens are still riding the “Ray Lewis is retiring train” and that won’t hurt them here. We just think that if Bill Belichick has the time, he’ll find a way to beat you in the end and that is especially true in Foxborough where the Pats have one of the leagues best home records. 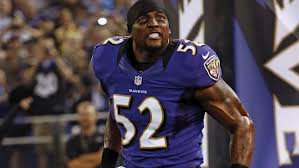 #52 MLB Ray Lewis should be playing the last game of his career if the Furnace is right. Photo: sportsgrid.com