What major flaw have the Knicks exposed to the league?

Over the first third of the season, the Knicks have amassed the  most technicals fouls in the league with 32 (if you count the techs that Mike Woodson has had called on him) as of 1/11/13.

If you were to take into account their games against the Grizzlies, Bulls, and Celtics, it becomes apparent that the more you rile this club the more apt they are to letting it affect them. This was never more evident then in the Celtic game last week when the league’s leading trash talker, Kevin Garnett, had a mouthful for Carmelo Anthony for most of the game. And it worked to perfection.

Melo’s game was already ‘off’ on that night and K.G.’s relentless barbs were just enough to keep Melo from regaining any confidence on  the floor. Actually, it was Garnett’s actions that prompted Knicks owner James Dolan to get a couple of high tech recording devices on the the sidelines in the ensuing game.

This flaw, exposed on too many occasions this season, has not been limited to just Carmelo. The leagues all-time technical foul king, Rasheed Wallace is still at it (when he’s on the floor). Tyson Chandler and J.R. Smith have been guilty with a half dozen T’s between them. And perhaps more oddly, the person with the second most Tech’s on the team is their coach Mike Woodson with six on his ledger. If one is to lead by example, then that’s exactly what Woodson is guilty of. 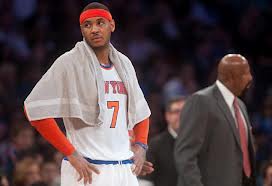 So how can this flaw on this team be exploited? Easily! Other teams now know if the Knick players are rattled, their game will be affected. All they need do is to look at the game tapes. And it’s not just the T’s that are disruptive, it’s the impact that ejections can cause to the flow of the game that’s even more detrimental, and the Knicks have had their share of those as well, including Mike Woodson.

So what’s the answer? Obviously it’s up to the coaching staff to preach to the players to maintain their cool and not be sucked into a street game with some of the teams in the league. Tech’s and ejections can dictate the outcome of some of the games played in the regular season which could have an impact on where a team ends up in the post-season.

It’s not clear whether or not this year’s Knicks, replete with so many veterans can garner such self-control, but they need to try and turn this flaw somehow into a positive if they are to be successful. And they need to do so before it is too late…

9 comments on “What major flaw have the Knicks exposed to the league?”