There are some real bargains to be had on the waiver wire if you look deep enough. Here are some that we’ve put together which could help tweak your roster, especially if it’s been beset by multiple injured players like Eric Gordon, Anthony Davis, Nene, Andrew Bynum, etc.. Oddly enough, all of this week’s waiver wire pickups are ALL former first round picks.. Good luck!

1. Kevin Seraphin-PF/C- Wizards- Yes, it is possible that there could be a player on a team that’s won only two games that can prove to be very serviceable on your roster. This former first round pick of the Chicago Bulls in the 2010 draft is one of them. He was given an opportunity to start when Nene went down and he proved himself worthy of maintaining starter’s minutes when he returned. In his last eight games- five as a starter and his last three off the bench- the 6′ 9″ Seraphin has averaged 14.6 points , 8 rebounds, and 1.25 blocks per game and has garnered 4 double-doubles. His dual position eligibility is an added bonus and as he is only owned in 30% of leagues, he is someone to consider rostering in all leagues & formats.

2. Corey Brewer-SG/SF-Nuggets- Another former 1st round pick, Brewer was the 7th all around pick of the Minnesota Timberwolves in the 2007 draft. He’s essentially ex-Knick Danilo Gallinari’s backup in Denver, but has seen his minutes climb a bit over the past week and the surge has helped his overall numbers. In his last three games while playing just under 25 minutes a game, Brewer has scored 58 points! He’s on his way to finishing the season with 100 steals, 125 threes and just around 1,000 points. He is worth taking out a flier on him as you would want to see if he can sustain these types of numbers over the next several games. Owned in just 15% of leagues, you’ll have the time to watch & wait.

3. Marco Belinelli-SG-Bulls- Here is another player you will want to take a flier out on until Richard Hamilton (plantar fascia) returns. His minutes should continue to rise even after Hamilton’s return making the Italian born star more fantasy relevant. The three categories that he could be of some help to your team with is points, three-pointers, and FT percentage. In the last three games he’s started, he’s averaged 20 points, just under 3 three-pointers, and was 11 of 12 at the FT line. Available in just around 90% of most leagues, we would recommend this former 1st rounder only in deeper leagues. 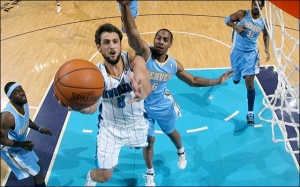 #8 Marco Belinelli has averaged 20 points a game in the 3 games that he’s started in Richard Hamiliton’s place. Great for deeper leagues-Watch in others. Photo: Bulls.com

4. Gerald Henderson-SG/SF-Bobcats- Henderson is our fourth former first rounder, twelfth over all pick of the Bobcats in the 2009 draft. He too is someone to consider if you need points as Henderson will afford you little else in other categories. The former Duke star has just come back from a foot injury and is being eased back slowly. It will be only a matter of time before he returns to his starting role. This feisty & inspirational leader of the Bobcats brings more of an intangible presence to the floor each night. He will give your team 20+ points a night at best once he’s back to full strength and is available in 65% of leagues.

5. Ben Gordon-SG-Bobcats- This is our final 1st round pick and third overall selection of the Chicago Bulls way back in the 2004 draft. Gordon is also a former Sixth Man of the Year Award winner. He’s still coming off the bench but is not doing it quietly as he can still bring it as shown  on Monday night when he knocked down 8 three-pointers, all after halftime, for a franchise record. The 29 points he tallied also put him over the 10,000 career NBA mark. Prior to his last 2 blowout games to the Spurs & Bucks, Gordon had averaged 22.7 points and 5 threes over the previous four games. If you lack points and threes in particular and Gordon is available in your league, (he’s currently owned in 45% of leagues), then consider adding the sharpshooter for your roster. 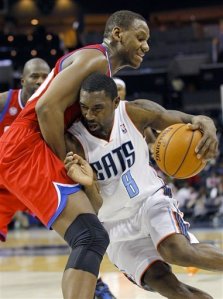