For the upcoming Thanksgiving Holiday, we are providing owners with our Holiday Waiver Wire Picks. It’s an abbrevaited cross-section of widely available players for you to consider rostering for the final few weeks of the regular season. We have also included our “Sleeper of the Week”. Good luck!!

Golden Tate-WR-Seahawks-  Over this second round pick out of Notre Dame’s last three weeks, Tate has 13 receptions for 143 yards and three touchdowns, giving him six on the season. He’ll face the Miami Dolphins this week who give up the 8th most fantasy points to wide receivers. He’s available in 70% of leagues. 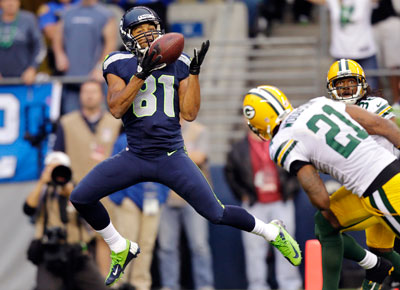 T.Y. Hilton- WR-Colts- With teammate Donnie Avery out last Sunday with a concussion, Hilton went off for 6 receptions on 9 targets for 100 yards and 2 touchdowns. If Avery misses this week’s contest vs the Buffalo Bills, who give up the 11th most fantasy points to wideouts, then grab Hilton off of waivers where he is currently owned in just 35% of leagues.

Marcedes Lewis-TE-Jaguars- With QB Chad Henne under center Lewis has been more involved in the offense, as he caught 3 passes out of 4 targets for 40 yards and two touchdowns against the Houston Texans last week. He’s been known to get a case of the droppsies once in a while however this week he’ll get more opportunities going up vs the Titans who yield the 4th most fantasy points to TE’s. He’s available in almost 90% of leagues so in deeper leagues he would make a nice addition.

Ryan Broyles-WR-Lions- With WR Titus Young deactivated on Thanksgiving Day for disciplinary actions, Broyes should see an increase in targets this week in Detroit on the other side of Megatron. Owned only in 20% of leagues, he’s a must add in 12 team and deeper leagues and as an inexpensive flex play in PPR leagues.

Jalen Parmele-RB-Jaguars- Maurice Jones-Drew will sit out this week’s game vs the Titans and coach Mike Mularkey has already said that Parmele will start over the inept Rashad Jennings. As he’ll be facing a Titans team that gives up the most fantasy points to running backs, we are making Parmele our “Sleeper of the Week” and a Must Add in all formats. Any owner needing to plug up a hole at RB (like where Willis McGahee used to be for example), should consider picking up Parmele who is only owned in a scant 2% of leagues. He could be the best kept secret in fantasy leagues this week!

#34 Jaguars RB Jalen Parmele will start this Sunday against the very generous Titans who yield the most fantasy points to RB’s in the league. Photo: AP Photo/Stephen Morton