Another 3-2 week has brought our season total to 32-18. The Bengals were out to prove that playing against the defending Super Bowl Champion Giants was not going to intimidate them. And it didn’t as they blew them away 31-13 in Cincinnati. The G-Men are in their typical November slide and are enjoying a late season bye week in which they will need to regroup and prepare for their week #12 matchup vs the Packers. Our other loss was by the Dolphins who never showed up to play on either side of the ball and coughed up their 2nd loss in as many weeks to the Titans in Miami. Let’s see if we can improve a bit with this week’s Five Best Bets…

REDSKINS over the Eagles-Michael Vick is still suffering from the effects of the concussion he sustained last week. He’s been dizzy and “foggy” all week and it wouldn’t be surprising if he sat out for the remainder of the season. Rookie Nick Foles takes over on Sunday vs the ‘Skins. His only NFL experience came last week when he went 22 for 32 for 219 yards with 1 touchdown, 1 interception, and 2 sacks. His biggest obstacle will be the Eagles offensive line who will allow the Redskins to add to their sack totals this week. Washington’s offensive line isn’t world class either but in RGIII they have an elusive QB who can run. The Eagles, much like the Jets, are 3-6 and have lost their last five games in a row, placing their season now on life support.

#10 RGIII will be the difference maker in this one. The Eagles’ lack of an effective offensive line will not make rookie QB Nick Foles job any easier. Photo: zimbio.com

Buccaneers over the PANTHERS- In their last five games the Bucs are 4-1. In that span they have averaged a healthy 35.6 points per game and have yet to run into a defensive  scheme that can contain them. Josh Freeman, Doug Martin, Vincent Jackson, and Mike williams represent far too much talent to lose to the 2-7 Panthers who have failed to score more than 14 points in 4 of their last 5 games. They have some nice players in Cam Newton, Jonathan Stewart, and Steve Smith but they have been far too inconsistent and won’t put up enough points to stay with the Bucs. They’ll lose this game by double digits.

Bengals over the CHIEFS- The Bengals defense which we suggested as a Must Add this week, has the fourth most sacks in the league and are not exactly going up against a pro bowl quarterback this week. They also are fifth in fumble recoveries and we would expect both of these categories to rise this week. This should also be a one-sided affair unless of course, the Bengals are caught in a ‘trap week’ after beating up on the Giants last Sunday. They had lost four in a row prior to last week’s win and we believe that they’ll start a new streak with back-to back games vs the Chiefs and Raiders; teams they should beat. 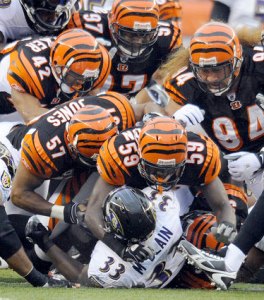 The Bengals defense is fourth in the league in sacks with 27. Photo: associated press

Saints over RAIDERS- These are two teams that are going in completely different directions. The Saints are 4-1 over their last five games while the Raiders are 2-4 over their last six. Oakland will be without their featured and oft injured running back Darren McFadden and Mike Goodson this week although Carson Palmer should have no problem reaching the 300 yard passing plateau for the ninth time as a Raider, against a very porous New Orleans defense ranked last in the league. Drew Brees holds a career 6-0 mark vs the silver and black to go along with 13 touchdowns and 0 interceptions. The Saints need this game because starting with week #12, they will face three very tough opponents in the 49ers, Falcons, and Giants.

COWBOYS over the Browns-Dallas has noticed how their divisional rival Giants have been slumping over the past three weeks and need to gain some ground on them before the G-Men turn things around. Only 2-3 over their last five games, the ‘Boys lost some tough ones by margins of 2, 5, and 6 points respectively. The 2-7 Browns, at this point of the season, are basically just playing for pride as they have eliminated all possibilities of making it to the post season. RB Trent Richardson has been the highlight of their offense while QB Brandon Weeden has failed to pass for 200 or more yards since October 21st. The ‘Boys will end the day by evening their record to 5-5 and increase their chances of being a Wild Card team at season’s end.

#3 Cleveland Browns QB Brandon Weeden has failed to pass for at least 200 yards since the third week of October. Photo: AP Photo/Mark Duncan