We’ve already reached the midway point in the season. After this week’s games you should be able to seperate the contenders from the pretenders as enough of a sampling will be available and you will have a better idea of who will make it to the post-season.

We had 2 losses last week going 3-2. The Bills lost by one which hurt, and the Bengals lost by a touchdown, as Dalton to A.J. was just not working against the rigid Steelers defense even without Troy P. Our season record now stands at a decent 22- 13; better than most pundits but still room to improve. Here’s our top five picks for this week:

Giants over the COWBOYS-   We picked the Giants over the ‘Skins last week and see no reason why they shouldn’t repeat this week vs the ‘Boys in Dallas. After all, since the $1.2 billion stadium was built in Dallas in 2009, the Giants have had ‘home field advantage’, going 3-0 in their building! Injuries will have a greater impact on the Cowboys this week as RB DeMarco Murray will sit out for another game and RB Felix Jones is questionable. Dallas will also be without their starting center and their leading tackler Sean Lee who’s out for the remainder of the season (toe). The Giants will have Chris Canty, Prince Amukamara, and a healthy Hakeem Nicks, all of whom were missing in the season opening loss to the Cowboys.

#10 Eli Manning goes up vs #9 Tony Romo this Sunday in East Rutherford for the 2nd in their two-game season series. Photo: popscreen.com

JETS over the Dolphins- The 3-3 Jets beat the Dolphins in Miami 23-20 in week #3 and we think history will repeat itself at Met Life Stadium this Sunday. Although Miami boasts the receiver who came into last weeks games leading the NFL in receiving yardage, Brian Hartline, he was held to just one reception for 41 yards when these two teams last met. Could be because at the end of last week, the Jets have  given up the least amount of fantasy points to wide receivers in the league. That will mean a lot of Reggie Bush, something that the Jets are well aware of. Kerley, Hill, & Keller should all have a decent day against a Dolphins team that yields the 8th most fantasy points to wide receivers- if Sanchez gets the time. A victory gets the Jets another divisional win and evens their record at 4-4 going into their bye week. They’ll take it…

BRONCOS over the Saints-Coming off of their bye, the Broncos take on a Saints team that clearly is under achieving this season. They lost their first four games before defeating the Chargers and Bucs. Their defense is almost non-existent yielding the second most fantasy points to running backs in the league, making Willis McGahee a great play this week in what should be a high scoring affair. Peyton Manning will be throwing against a Saints team that gives up the 4th most FP to WRs in the league. The Broncos secondary can be scored upon as well but have a better overall defense and should pick up their 4th win in this one. 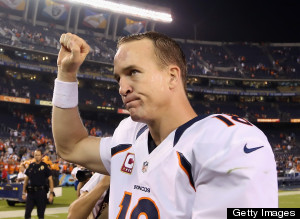 #18 Peyton Manning should put up some good numbers vs the Saints this weekend. RB Willis McGahee is a good play as well.

PACKERS over the Jags- The 4-3 Packers have been coming on since their stunning loss to the Indianapolis Colts in week #5. They beat the Texans and the Rams in their last two and hopefully will not have a let down in this potential ‘Trap’ game against the lowly Jags. The Jags have a fairly good defense but with Maurice Jones-Drew out this week their offense will take a huge hit. Aaron Rodgers completed 81% of his passes last week vs a pretty good Rams secondary and will be challenged a bit as Greg Jennings will sit this one out and Jordy Nelson (hamstring-hurt in practice) is questionable at this point until the extent of this latest setback is known. Expect a lot of Jermichael Finley in this one.

49ers over the CARDINALS- This is a tough game to call as these two teams are so evenly matched. Both have excellent defenses and they play in the same division. They split the season series last year with Arizona winning their game at home by 2 points. The Niners held Larry Fitzpatrick to just 41 yards and a score at S.F. but then he burned them for 149 yards and a touchdown in ‘Arizona. This season however, S.F. is 31st in FP to opposing WRs, just behind the Jets so Fitz might be in for more for a fight defensively this weekend. On the other side, Alex Smith will not be a great play this week as the Cards have given up the least fantasy points to QBs this season. We’re going with the Niners in another close one.

#11 WR Larry Fitzgerald will have to be slowed down if the 49ers are to win this contest vs the Cards. He torched them for 149 yards and 1 TD in Dec. ’11. Photo: Streeter Lecka/Getty Images