Following the Titans win over the Pittsburgh Steelers on Thursday night, a sixth sense is telling me that this could be a week of many upsets. We’ll pick a few underdogs but we won’t go overboard as common sense and statistics will always prevail over sixth sense feelings.

We finished week #5 going 4-1, bringing the last two week’s total to 9-1 and our season record to a more respectable 17-8. We’re hoping this little hot streak continues in Week#6. Here are this week’s five best bets:

Chiefs over BUCCANEERS: There are several reasons for us going with the Chiefs this week as a road dog. The first is that KC is one of only three teams to rank in the Top 10 in both offense and defense. This week, what makes that stat so overwhelming is that Tampa Bay is one of two teams to rank in the bottom five in both offense and defense. The Bucs have won only one game in their last 14 dating back to October 23 of last year. Their only victory was in week #1 this season; a 16-10 win over Carolina. Not very impressive and thus no reason why the Chiefs cannot pull off the upset in this one.

FALCONS over the Raiders- We simply cannot see the undefeated Falcons caving at home against an under-achieving Raider team that has to travel cross country for the second time in the last four weeks. Raider RB Darren McFadden has only rushed for more than 34 yards just once in Oakland’s four games this season. We don’t think the bye week will help turn this team around enough to beat Matt Ryan, Roddy White, Julio Jones, and co., especially when you take into account that they are 2-8 in their last 10 regular season games. 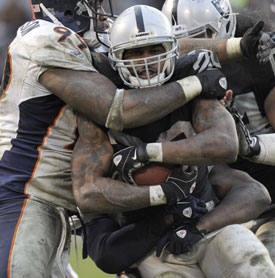 #20 RB Darren McFadden has had a rough time through 3 of the first 4 games this season failing to rush for more than 34 yards in those games. Photo: denverpost.com

CARDINALS over Bills- The Cards are decimated at the running back position due to injuries to Beanie Wells and Ryan Williams and will have to turn to LaRod Stephens-Howling to handle the starting duties this week, but since as a team they only rush for an average of 2.7 yards per carry and are still 4-1, it shouldn’t make too much of a difference. We like Stephens-Howling and think the Darren Sproles type running back could put up some decent numbers against a Bills team that became the first team to give up 300 yards rushing and 300 yards receiving in the same game!

Lions over the EAGLES- Another upset pick here as the Lions, coming off a bye and in need of a win, travel to a difficult and hostile environment in Philadelphia. The Eagles have been winning games with mirrors all season, winning three games by a total of 4 points and scoring more than 19 points just once in their five games. Michael Vick has been sacked 14 times, has fumbled 8 times, and has looked ‘shaky’ and uncomfortable in every game this season. We don’t think he will be able to match Detroit’s offense which is beyond overdue for a breakout game when all the Eagles were able to muster was 6 points against Arizona in week 3 and 14 points vs the Steelers last week. 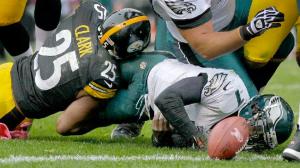 #7 QB Michael Vick hasn’t been able to generate much offense due to his fumble issues and many sacks this season. Photo: associatedpress

TEXANS over the Packers- The 2-3 Packers have played some Un-Packer-like football through their first five games this season. They are currently 16th in the league in passing and 20th in rushing. We simply cannot see picking a team that’s lost to Seattle (scoring only 12 points) and Indianapolis, a game in which they were up 21-3 at halftime and lost by giving up 27 points in the final two quarters. You can’t expect them to eke out a win on the road and against the team with the league’s number one defense. Just not happening…