Every so often a regular season NFL game comes along with an inordinate amount of interesting and little known facts accompanying it. Thus was the case in the Giants 41-27 defeat of the Cleveland Browns on Sunday. At least five records were either tied or broken at Met Life Stadium on a rainy & chilly October afternoon. Here are some of the more interesting stats that we were able to extrapolate from this game…

1. The Giants came into this game averaging 89.5 yards on the ground per game. Sunday they had 243 rushing yards on the day.

#44 RB Ahmad Bradshaw, after fumbling on the Giants first drive of the game, went on to rush for a career high 200 yards on 30 carries and a TD. Photo: Nick Laham/Getty Images)

3. Cleveland has now lost 11 games in a row dating back to last season.

5. WR Victor Cruz had a career high three touchdowns in one game.

#80 WR Victor Cruz had a record setting afternoon vs the Browns on Sunday, scoring a career-high 3 TDs. Photo by Elsa/Getty Images

6. With just under four minutes left in the 1st quarter, the Giants scored on a 92 yard drive; their longest of the season. 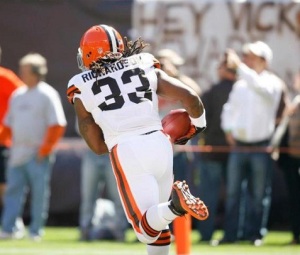