VIDEO OF THE WEEK: The Hardest Tackles in NFL History!

VIDEO: Before all the rule changes like the ones that were enforced to ‘protect the quarterback’, ‘in the grasp’, plus no ‘helmet to helmet’ hits, no ‘horse-collars’, etc,  there were plays made that will turn the stomach of even the most staunchest of football fanatics. But this was how the game was played. For the ones on the battlefield it wasn’t pretty at times. Defense was what the game was all about. It wasn’t a quarterback-driven league like it is today. It was, instead, how hard can a player hit another. And, undoubtedly, there were “Bountygate” types of meetings before some games on most teams. 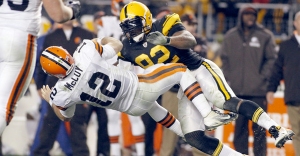 We’re not condoning this type of violent play any longer, especially given what we now know about such things as concussions and their long term affect on the brain. Bears QB Jim McMahon, for example has been suffering with forms of dementia for years because he was concussed so many times. Some of the new rules have actually increased a players years in the league substantially, so it does have some validity and purpose.

On a different note, can you imagine what it must have been like 20-30 years ago had there been fantasy leagues? With all the injuries that took place, you would have had to camp out on the waiver wire and then make wholesale changes regularly..

What you will see here is definitely NOT for the squeamish. These are some of the hardest NFL hits (and the majority  of them perfectly legal) that you will ever see. In particular notice all of the helmet-to-helmet hits, and some of the viscious hits on the defenseless quarterbacks.

Please pardon the music selection. It’s a bit rough around the edges so you might opt to lower the volume…

7 comments on “VIDEO OF THE WEEK: The Hardest Tackles in NFL History!”