There’s a joke going around Twitterland that WR stud Victor Cruz saw the Giant’s team physician after the game on Wednesday night who told him he had a very high immune system and that if it didn’t change it would mean that he wouldn’t catch anything! 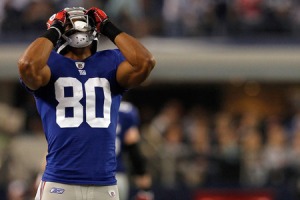 I don’t have the statistics right in front of me but if I were to venture a guess, I would say that Cruz had three drops in all of last season; and I would be close. Did his three drops on opening night in E. Rutherford, N.J. cost the N.Y. Giants the game? No. They only lost by a touchdown. But they were costly nonetheless.

What could have been more costly over the course of the game was rookie David Wilson’s 1st quarter fumble. Wilson, who electrified the crowds and Offensive Coordinator Kevin Gilbright in the pre-season, never lined up in the backfield again after his blunder causing the G-Men to go exclusively with Ahmad Bradshaw the rest of the game. He ended up fighting for every inch of the 76 yards he did manage to roll up.

Even the Karma wasn’t very good. The Cowboys didn’t play a ‘great’ game ; the Giants played a worse one. Dallas was called for double-digit penalties (13), was devoid of a running game the entire the first half, and had a Romo pass intercepted by LB Michael Boley for a 52 yard return.

#85 Dallas Cowboys WR Kevin Ogletree scores on one of his two touchdowns vs the Giants. Photo: Tom Pennington/Getty Images

Queens native WR Kevin Ogletree, perhaps the Victor Cruz of the 2012 season, caught 8 passes for 114 yards and two touchdowns. Not Austin Miles, not Dez Bryant, not Jason Witten; none of them. In his first three seasons, Ogletree had caught just 25 passes and had zero touchdowns…Can you spell K-A-R-M-A? If you can’t, I can tell you that the Cowboys had plenty of it on the field on Wednesday night vs the Giants- their first Wednesday night game since they defeated the Pittsburgh Steelers 14-12 on Oct. 3rd, 1934.

And then there was the Giants depleted secondary; no Thomas, no Prince, and even replacement Michael Coe went down with a hamstring injury during the game. An ineffective 4th stringer forced the Giants staff to look through the stands for a healthy concessions staffer to help out, but the beer sales were too brisk for the guy to suit up!

Give credit to the ‘Boys (hard as that might be to do for some fans of Big Blue), but they seemed to want this game more than the defending Super Bowl Champions. That was clear. It was also clear that Kevin Ogletree is fast becoming Tony Romo’s favorite target. Until, of course, he plays a team with a healthy secondary.We’ll see…

Meantime, given the Giants’ second half schedule, one of the worst in memory, they need to focus on the Tampa Bay Buccaneers-a game that already can be classified as the obligatory “must win”. The Bucs come in to Met Life Stadium on Sunday September 16th which will give Victor Cruz about 10 days to fix his immune system…