The majority of fantasy leagues do not have Individual Defensive Players (IDP’s) as part of their roster, however enough does to warrant listing our late round pickups & sleepers as well as IDP’s to avoid altogether. We have received over 50 emails requesting our take on this category and so here are our brief assessments…

Lardarius Webb-Ravens- Starting for the first time last year, Webb had 5 INT’s and added 3 more in the playoffs. That plus his 54 solo tackles makes him a nice late round pick.

Brandon Browner-Seahawks- The 6′ 4″ DB had an impressive first season collecting 51 solo tackles to go with his 6 picks; 2 of them for touchdowns. Definitely on the rise.

Alterraun Verner-Titans- We think Verner will be one of our best sleeper picks this season as he returns to a starting role this season where his history shows he excels: 102 total tackles (86 solo) in 15 career starts!

Colin McCarthy-Titans- We are very high on this Middle Linebacker who will get the strating nod this year. In seven starts last season McCarthy had 53 total tackles (40 solo) and expect big numbers from him over a full season. Sleeper candidate for sure. 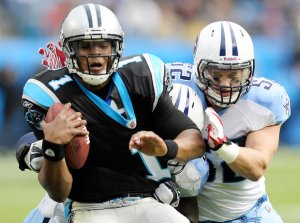 #52 MLB Colin McCarthy teams up on a sack of Cam Newton last season. He is one of our sleeper picks in ’12. Photo: charlotteobserver.com

Pat Angerer-Colts- Easily the Colts best LB, he amassed some nice numbers last year. This Inside Linebacker had 146 total tackles, 76 of the solo variety.

Lawrence Timmons-Steelers- We are looking for Timmons to return to the numbers he put up in 2010 95 solo tackles, 132 total. He won’t be playing OLB again this season so that that should help him attain higher results. Sleeper alert here.

Chris Clemons-Seahawks- Undoubetedly Pete Carroll’s best pass rusher, we expect another 10-12 sacks again this season. He has 11 in the last two seasons.

Ahbyba Rubib-Browns- This back, who should be there for the taking late in your draft, is coming off of two 80+ tackle seasons and will also provide you with 5-7 sacks.