Fantasy Football: Running Backs to grab in the middle to late rounds

We’ve given you the WR’s to grab in the later rounds of your draft, and now it’s the running back’s turn. We have chosen our list from 3 tier RB’s and higher and hopefully if you haven’t finished drafting (or for some of you if you haven’t started yet), here are some backs worth grabbing in the mid to late rounds…

BenJarvis Green-Ellis-Bengals- We liked this signing as soon as it was announced as the Bengals historically, are a running team first and foremost. With only Bernard Scott and Brian Leonard as back ups, BJGE should run and run often and have his share of goal line carries. For some reason, Steven Jackson is coming off the boards before Green-Ellis and frankly, we think it should be the other way around. In the last 3 seasons, S-Jax has seen his yards fall 1416, 1241, and last season 1145. He averaged 5 TD’s over the same period, while Green-Ellis has averaged 12 TD’s over the past 2 seasons with the Pats-and that was in a time-share! In fact we like BJGE better than Adrian Peterson and Frank Gore as well. 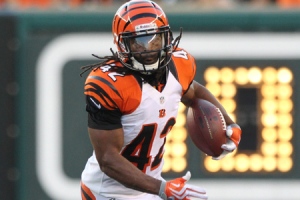 #42 BenJarvis Green-Ellis is now with the Bengals coming off a 12 TD season in a back-up role with the Pats. Photo: Matthew Emmons-US PRESSWIRE – Presswire

David Wilson-Giants- The N.Y. Giants who seem to make all the right moves lately, picked the Virginia Tech star in the first round for a reason; he’s a super-fast sly running back who will provide the lightning in the G-Men’s running game. If you’ve seen any of the pre-season games, you would have noticed how he can elude tackles and pick up some nice yardage after contact. He will make a formidable RB2 and at the same time will provide insurance for Ahmad Bradshaw owners. He’ll make a nice mid round pickup.

Donald Brown-Colts- Talk about late round value, the former fist round pick out of UCONN has virtually no competition so the starting back job is Browns to lose. Rookie QB Andrew Luck will rely heavily on Brown who also has great pass-catching ability which will help all those in PPR leagues. In a back-up role last season, he had as many touchdowns (5), as Steven Jackson. It must sound like we’re picking on S-Jax, but really, we’re just bringing out a point. Snatch this former Husky late-you won’t be disappointed.

#31 former Husky Donald Brown could be in for a sleeper kind of year. An excellent late round pick up and a + for PPR leagues. Photo: Jonathan Daniel/Getty Images

Toby Gerhart-Vikings- Although Adrian Peterson was allowed to participate in full practice on Monday with his teammates, they were told to hit him …”a little bit”. It still is only eight months since AP tore his ACL and MCL in his left knee. There is no guarantee that he’ll be able to muddle through an entire season unscathed, so we like Gerhart to pick up some of the slack and take over in the event Peterson gets re-injured. It would not surprise us if Gerhart actually finishes the season with more carries than AP.

Isaiah Pead-Rams- Speaking of the aforementioned Steven Jackson, although he will be the starting RB for St. Louis this season, his body has taken a pounding over the years, and that was part of the reason they brought in the Cincinnati running back who finished his final year with 1259 rushing yards & 12 touchdowns to go along with his 319 receiving yards and 3 TD’s. New coach Jeff Fisher is also fond of the ground and pound so that will help Pead also. We think he’ll take some of the 3rd down carries away from S-Jax and of course, will be the replacement for Jackson in case of injury. Those in PPR and Keeper leagues might want to think about grabbing Pead in the later rounds as well.

#24 Isaiah Pead, Steven Jackson’s back-up and 3rd down back, should get a nice share of carries for  run oriented coach Jeff Fisher. Photo: St. Louis sbnation.com

10 comments on “Fantasy Football: Running Backs to grab in the middle to late rounds”