There are just three weeks to go (two starting on Monday) in fantasy baseball’s regular season. Like in any fantasy sports league, the key is to make it to the playoffs for the chance to win your league. Teams that are out of contention are holding auditions for new talent  or giving part time bench players more playing time  just to see what they have if allowed to become an everyday player. Some of this talent is worthy of pickups off  of waivers as they might afford you some nice extra points going into your league’s post-season. Take a look at these:

Eric Young-2B,OF-Rockies- Perfect example about a role player finally getting an opportunity to play every day. Young was given that chance on August 6th and has taken advantage of his promotion. His manager and teammates have been impressed by his outstanding numbers over these past ten games. For starters he’s bating a whopping .477 (21-44) over that stretch with 11 runs scored, 3 home runs and 7 RBIs-8 of those 10 games were of the multi-hit variety- with all that production coming out of the 1 hole. He’s now batting .323 for the season and in a limited role has 13 stolen bases. Young is a ‘Must Add’ in all formats as long as he continues to receive the starting nod. He’s owned in just over 20% of leagues.

Manny Machado-3B, SS-Orioles- The Baltimore Orioles rookie infielder, who was called up last Thursday, was named the American League Co-Player of the Week on Monday for a period ending Sunday. In his first seven games in the big leagues, Machado has collected 3 homers, 2 doubles, a triple, 7 RBIs, 5 runs scored and a .308 Batting Average (8-26). He’s become the everyday Orioles 3B but because of his SS eligibility, he’s been one of the most sought after pickups off waivers over the past 4-5 days. He’s still available in half of all leagues so if you’re lucky you might still be able to capitalize of this youngster’s talents.

Steve Lombardozzi-2B,3B,OF-Nationals- Here is another player that’s now nailed down the 2B job for the Nationals in just his 2nd season on the team. (He only played in 13 games in his rookie season last year as a late call up). He won’t give you power numbers nor does he posses much speed, but he’s hot  right now and with managers scrambling for that last playoff spot, he will be able to help those in A.L. only leagues and 14+ leagues. Over his last eight games Lombardozzi is batting .533 (16-30). has 2 doubles, a triple, 1 stolen base and 8 runs scored. He has 3 position eligibility which could also come in handy for some managers and is available in 95% of leagues.

Alex Cobb-SP-Rays- When you talk about hot pitchers you’d have to include this former 4th round pick of the Rays. He has collected seven quality starts…in-a-row! He’s gone seven innings in his last four and has only given up only 1 earned run in each of his last three outings. SP Jeff Neiman, whose getting set to return to the Rays, won’t be bumping Cobb from the starting rotation given that he’s won his last three games and rung up 18K’s while walking just 3. Those of you who stream can certainly take advantage of Cobb as can those in deeper leagues. He’s available in 80% of leagues.

Garrett Jones-1B ,OF-Pirates- We don’t know how or why this veteran has been so overlooked this season because he is on pace to eclipse his career marks for home runs (21) and RBIs (86). He has already hit more HRs and driven in more runs than he did last year in 105 LESS at bats! In the past week, Jones has hit 3 HRs and driven in 12 runs. He should be owned in A.L. only leagues as well as 12+ leagues and is available in 65% of leagues. 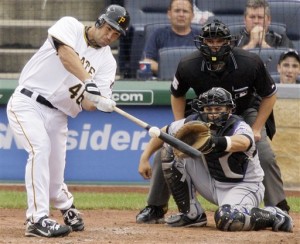 #46 1B,OF Garrett Jones was involved in trade rumore in ’10 in A.J. Burnett talks but the Pirates opted to hold onto Jones. Photo:AP Photo/Gene J. Puskar