Giants and the Jets…sounds like an old Elton John song doesn’t it? These two New York teams who awkwardly share the same stadium (in another state), are categorically two very different teams and not just talent-wise. If I had to come up with just one word to describe both of them, I would use the word ‘consistent’ for the Giants and ‘distraction’ for the Jets. 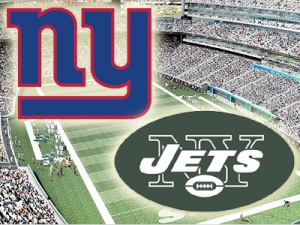 While the New York Jets have literally turned into the Dallas Cowboys; fairly talented but under-achieving, the New York Giants have been the model of consistency winning two Super Bowls in four years. Part of the reason for the success of Big Blue is the fact that Eli Manning has played for the same head coach, Tom Coughlin, and the same offensive coordinator, Kevin Gilbright,  for his entire NFL career and if you don’t think that it makes a difference, just ask Peyton Manning who worked with OC Tom Moore since he was the number one pick in the 1998 draft until his departure at the end of last season. 72 year old Moore, by the way, coincidentally, was signed last month by the Jets as a consultant.

The New York Jets, on the other hand, seem to spend more time grabbing the back pages of newspapers with their high profile signings and very vocal head coach, Rex Ryan. In the past nine months alone we’ve seen the sulking and benching of Santonio Holmes towards the end of last season in a game vs the Dolphins, and then more negative sound bites before the pre season began last month. It’s no wonder that the Steelers had no problem letting him go. There was the Tim Tebow signing which we’ve all heard and read about ad nauseam for months and then outlandish comments made by Antonio Cromartie. There was the two in-fighting incidents during 7 on 7 drills 2 weeks ago, and lastly, we’ve all heard of the brash super bowl predictions by Rex Ryan as well as his fabled foot fetish addiction. And on and on it goes…one distraction after another.

RB Ahmad Bradshaw carried the rock over 170 times last season and aside from injury, there is no reason to believe he won’t do the same this year as well. We like the Giant’s draft selection of David Wilson. He’s explosive and runs in the same style of Brandon Jacobs; North and South. Wilson will more than likely grab the majority of the 150 carries that Jacobs had, becomes the handcuff to Bradshaw, and thus has the potential of having a productive rookie season.

#34 Rookie RB David Wilson should have enough opprtunity to become a potential stud for the Giants. Photo: Prod.www.giants.clubs.nfl.com

We believe that Bennett who came over to the Giants from the Cowboys in the off season, will not be the typical TE that Giants fans are used to seeing. TEs for example like Jeremy Shockey or Kevin Boss. At 6′ 6″‘, 270 lbs, expect Bennett to be more of a blocking TE and Travis Beckhum the pass catcher. If you doubt our opinion then take this into consideration; Bennett has not caught a touchdown pass since 2008, his rookie season…

The Jets drafted the 239 lb. running back out of Baylor in the 6th round because if they have one deficiency, it’s their weak backfield. With OC Tony Sparano at the helm now, figure the Jets to return to the ground and pound type of offense and so you can expect Ganaway to steal a lot of carries away from Greene. He’s the logical handcuff to him as well and has the edge over  the lighter Joe McKnight.

A few weeks back we listed the Sanchise as one of our players to avoid drafting, so he becomes our choice here as a probable bust in ’12. We don’t think that he’ll lose his job to Tebow because when all is said and done Sanchez IS the better passer, however, once again, Sparano is big on the running game and when the Jets enter the Red Zone they will be more inclined to let Tebow run it in. Furthermore, expect Tebow to steal at least 15-20 snaps from Sanchez in order to run the Wildcat in the hopes that it will provide some confusion for  opposing offenses. 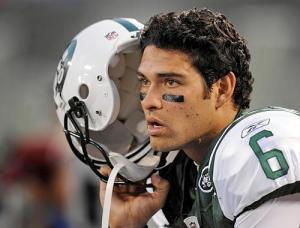 #6 Jets QB Mark Sanchez, entering his 4th year with N.Y., will be seeing some more bench time as he yields 15-20 snaps to Tim Tebow. Photo: boredandthirstynyc.com

Strength of schedule: No contest here. Their much weaker schedule will provide the Jets with the opportunity to win more games without having to play their ‘A’ game. Let’s take a look at the ‘probable’ .500 or worse teams the Jets will face in ’12: Miami-twice, Buffalo (twice), (although Buffalo might surprise), Seattle, St. Louis, Jacksonville, and San Diego. That, potentially is 6-7 wins right there. A few more wins against better teams and the Jets should make it to the playoffs.

The Giants, on the other hand, Super Bowl champs a year ago, have the daunting task of having the hardest schedule in the NFL. Probable .500 or worse teams they’ll face? Cleveland and Tampa Bay. And maybe Washington, although the expectations are pretty high there with RGIII under center this season. Just look at the Giants last four games of the season: New Orleans, Atlanta, Baltimore, and Philadelphia.  While the Jets final four include Jacksonville, Tenneessee, San Diego, and Buffalo. We are all too aware of how hard it is to repeat in the NFL, but the schedule notwithstanding, the Giants have enough talent, experience, and a top three defense that should propel them back into the playoffs once again.

What should make the Giants more of a contender this season and allow them to go deeper in the playoffs, will be their consistency, while the Jets’ distractions could hamper their chances and ultimately be their downfall.