The question of whether to steal precious picks away from more established players on draft day arises every year. They might have been college standouts but how will they perform on a professional level? Will they receive enough playing time? Will they live up to their expectations and in some cases, their hype? I don’t suggest that you base your team around them, but certainly there are several, that you may consider grabbing in the mid to later rounds.

If you look back on last year’s rookies who made an immediate and  impressive impact in the NFL and thus in Fantasy Football, you won’t find more than a handful which include these six: Cam Newton, Julio Jones, A.J. Green, Torrey Smith, Andy Dalton, and Daniel Thomas. And yet for each rookie that was successful, there were a long list of others who weren’t; either because of their lack of playing time, or injuries, or for the fact that they just weren’t that good. Such as: DeMarco Murray, Lance Kendricks, Greg Little, Roy Helu, Delone Carter, and Jonathan Baldwin to name a few.

So what we’re going to do is provide you with some of the rookies that have the talent to succeed and help you in your leagues while urging you to proceed with caution and implement when your options are limited or if you’re in deeper leagues. Remember too that luck, like in everything else, will play a part in whether or nor a rookie or two will help you to garner a fantasy league championship!

1. Trent Richardson- RB-Browns- We begin with the obligatory and prohibitive favorite to be the first rookie off the boards in your draft. The Browns made Richardson their third overall pick for a reason. They needed a boost in their lackluster offense and this beast of a back has scouts saying that he is the best back to come out of college since Adrian Peterson! Trent will be the Browns’ every-down back and we think he should be the 10th to 15th RB selected in drafts. Barring injury, he will be a top tier back by season’s end. 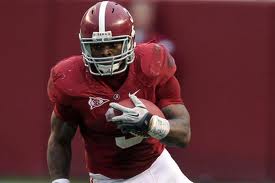 RB Trent Richardson will be a sure fire Rookie stud and will be taken early in most drafts. (Photo by Mike Zarrilli/Getty Images)

2. Doug Martin-RB-Buccaneers- Some scouts have compared the Boise State three-down back to Ray Rice, which is quite a complement in and of itself! The Bucs O Line has improved given the signing of All-Pro guard Carl Nicks and because of LeGarrette Blount’s ineffectiveness last season, Martin is the overwhelming favorite to become the Bucs starter this year. Remember the Bucs traded up to land Martin in the first round so we can’t see them yielding the starting slot to Blount. We think he’ll be the 15-20th back selected in most drafts.

3. Robert Griffin III-QB-Redskins- Although I rarely, if ever draft a rookie QB, I did so last year when I coralled Cam Newton on a hunch for my QB2 slot. And that’s what you may want to consider doing with RGIII. He has a great arm and like Newton, will keep the ball often and therefore should put up some decent fantasy numbers for a rookie. With good protection we can see him scamper in for several TDs if passing options are limited in the Red Zone.  Clearly one to consider. 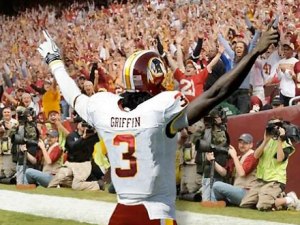 Redskins QB Robert Griffin III with have what it takes to fill your QB2 slot. Photo: nflpassers.com

4. Justin Blackmon-WR-Jaguars- On any other team with a top tier QB, we wouldn’t hesitate in recommending this All-America team WR, however, even though he’ll start and be QB Blaine Gabbert’s go to guy, we must tell you to use caution because of Gabbert. If he improves this year then Blackmon should thrive. For a team that finished last in passing in ’11, the additions of Laurent Robinson and Blackmon should help. Gabbert is the one who makes selecting Blackmon a cautious one.

5. Andrew Luck-QB-Colts- Once again, usually I would stay clear of fantasy QB’s but as a QB2, Luck might provide well…just that! He’s no Cam Newton but he does have talent when running the ball, something he might find himself doing more of than he wants. He thrived at Stanford where they utilized a two TE set and now that the Colts have Colby Fleener and Dwayne Allen at TE, it will help the youngster greatly. Another QB2 candidate, Luck can & will be useful in that role as he will have good success in some weeks as opposed to great success every week.

6. Isaiah Pead-RB-Rams- Although he will be mainly used as a third down back for the Rams behind Steven Jackson, he might be more successful in punching the ball in than S-Jax. A successful running team needs more than 5 TDs out of their featured back and Pead should help there. In fantasy leagues he should prove to be an asset in PPR leagues and of course, he’ll be the one to step in should anything happen to Jackson. He should be drafted but in much later rounds.

Here are some other rookies that you might consider drafting…

David Wilson-RB-Giants-Will see opportunities with the absence of Jacobs. Rushed for 1709 yards and 10 TDs at Virginia Tech. Makes a good handcuff to Ahmad Bradshaw. 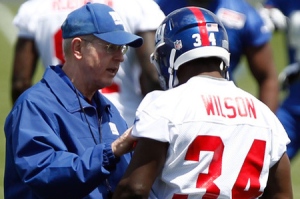 Giants Rookie RB David Wilson is the heir apparent on this season’s Giants squad. Will take some of the snaps that Brandon Jacobs had last season. Photo Debby Wong-US PRESSWIRE

Michael Floyd-WR-Cardinals- Another big Red Zone receiver at 6′ 3, 220 lbs. to play along side of Larry Fitzgerald. Better suited for Dynasty leagues as he’ ll need until at least next year as he’s more of a WR3 with Early Doucet at WR2.

Ronnie Hillman-RB- Broncos- Third in the nation in rushing last year at San Diego State, Hillman is more of a Darren Sproles type who can break out for huge gains at any time. Won’t start ahead of McGahee, but should see plenty of touches.

Randy Bullock-K- Texans- Don’t usually tout kickers, but there is an exception to every rule. Bullock was last last year’s Lou Grouza award winner as the nation’s best kicker! Neil Rackers’ replacement was the Texans fifth round pick that will have lots of opportunities in Houston. Could be a sleeper…