For those of you fighting for position in your leagues, you still have seven weeks left in the Fantasy Baseball regular season with which to do so. It is important to insure that you make all the moves and/or trades you can in order to assure yourself a playoff spot in your leagues, otherwise you would have wasted an entire season fruitlessly maintaining your team (s). Here are this week’s waiver wire pickups, all widely available, for you to consider:

Marco Estrada-SP,RP-Brewers- Now a permanent part of the Brewers depth chart, Estrada has started nine games so far this season and like most things in fantasy, there is good news and bad. The good news is that the righty can help you in two of the remaining four Pitching categories (we’re taking away the saves category as he isn’t a closer); strike outs and WHIP. In his 9 games Estrada had 59 K’s and only 7 BBs while posting a barely visible 1.04 WHIP. The bad news is that the Brewers have given the former Washington National almost no run support which would account for his 0-4 record. In those four loses his team scored 1 run, 3 runs, 1 run, and 3 runs and it’s hard to post victories while your team is averaging 2 runs a game in your loses. Take a flier on Estrada and if you’re in need of K’s, grab him as he’s owned in just 10% of leagues.

Jared Burton/Glen Perkins-RP-Twins- What did manager Ron Gardenhire do when his ace closer Matt Capps was shut down with rotator cuff strain? Yep! He went to Jared! Well, not exclusively…The closing duties are shared between Burton and Glen Perkins. Together they have saved 7 of 8 games while Burton, since the possibility of save opportunities arose, is 1-0 with three saves 0.00 ERA with a 1.12 WHIP and 7 K’s in 10.2 innings pitched. Perkins has done equally as well garnering 5 saves and 1 BS over the same period. they are both widely available as both of these closers are owned only in about 15% of leagues. If you’re desperate for saves and are in deeper leagues, run to the waiver wire and pick one up! (Note: Perkins has gotten more save opps.) 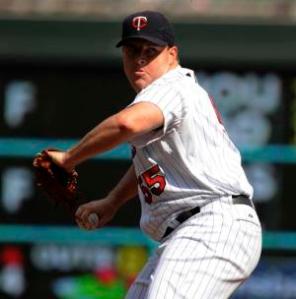 Brennan Boesch-OF-Tigers- The underachieving Detroit Tigers have at least one player that has been on somewhat of a tear in the month of July. Boesch, the 3rd round pick of the Tigers in the 2006 draft, in just his third season in the majors, in 14 games this month has collected 3 HRs, 14 RBI’s 6 doubles while posting a .361 batting average. He batted .283 last year so his current hot streak will ebb at some point. Meantime, his numbers prorate out to approximately 18-20 HRs, with 80-85 runs scored and RBIs. Serviceable, not Ruthian. He is available in 70% of most leagues and should be picked up in A.L. only leagues as well as 14+ and deeper.

Chipper Jones-3B-Braves- Yes, this is Chipper’s second time appearing on our waiver wire pickup list and it still is hard to understand why he is so readily available (65%). Over the past 14 days, Jones is ranked 56th in Yahoo! leagues! For the month of July he’s batting .380 (19-50) with 3 HRs, a dozen RBIs and six doubles. We’re talking about a career .304 hitter here who admittedly will not hit more than 20 home runs this season, but can help in N.L. only and deeper 14+ leagues as well.

Ben Sheets-SP-Braves-While we’re in Atlanta, let’s look at a starting pitcher who, prior to July 15th, hadn’t started a game since July 19, 2010! In his two starts this month, Sheets pitched 12 innings, allowed just 7 hits, struck out 11, walked 4, and won both games. His ERA stands at 0.00 while his WHIP is 0.92. He’ll face the last place team in the N.L. East, Philadelphia Philles, and then the second to last place team in the same division, Miami Marlins in his next two starts; both at home in Atlanta. Even if you use him as streamer material, you could do worse than Sheets who is currently available in 60% of leagues. 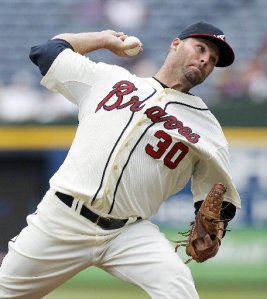 #30 SP Ben Sheets has been reborn so far in his first 2 starts in 2 years, going 2-0 and with an easy schedule upcoming. Photo:(Curtis Compton)