Running Back Backups You Should Roster…

One need only look at the injury riddled year it was for running backs in 2011 to see how handcuffing a backup could save your season. Just look at the names of some of the backs that suffered an injury which in most cases required surgery:

#25 RB Jamaal Charles is carted off the field after blowing out his knee vs the Lions in Detroit on Sept. 18, 2011. Photographer: Dave Reginek/Getty Images

What we’re recommending is that you handcuff a featured back with his backup at some point during the season if you see that they’re available on waivers. Or if your league offers a greater amount of bench players, then you would benefit greatly if you can stash one safely in case your back misses any time. Production lost when you lose a RB to injury can have a tremendous impact on your team. 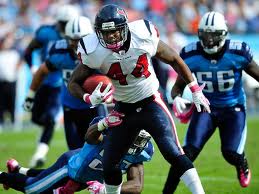 *There have been some reports that Mike Goodson would be McFadden’s backup but Jones is more likely to get the nod.

Hopefully you won’t have the need to employ the services of these backups, but isn’t it nice to know that they’re there  in case you do? Consider them as an insurance policy…

One comment on “Running Back Backups You Should Roster…”